Review: IN DUBIOUS BATTLE Allows James Franco and His Cast to Shine

James Franco directed and stars in an adaptation of John Steinbeck's novel about the labor movement in the 1930s. 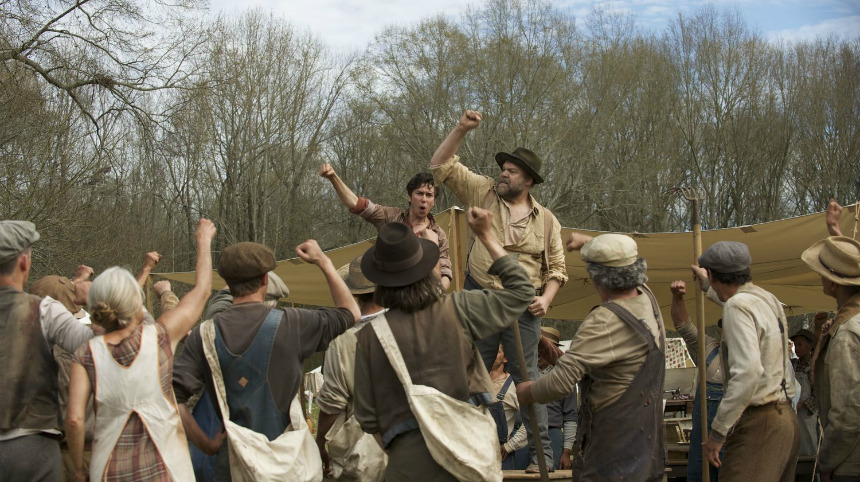 The figure of James Franco as a director is under constant scrutiny; this is his 15th film, yet he still hasn’t made one that has made the ripples that he no doubt wishes they had. His directing style is still undistinguishable, mixing some experimental elements with a direct approach at performance that makes him look amateurish, almost film school-like.

He’s been constantly mocked, especially after many adaptations of various works of literary masters, some deemed un-adaptable, and with In Dubious Battle he dares once again, but with a more conventionally structured novel. By adapting more agreeable material that approaches his political sensitivities, he manages to get closer to a more conventionally made film that becomes at times great because of the passion involved in the performances.

Franco and Nat Wolff star as two activists who enter an apple-picking company in the 1930’s to stir up a rebellion. They are part of an organization that looks to forward a revolution that will better conditions for the workers, especially since the wage has been reduced from three to one dollar a day.

The pace of the film is uncertain; it only starts to make complete sense 11 minutes in, when the two characters are on their way to join the men who are working. The style of the film shifts as it becomes a film about the process, not of picking apples, but of how they start to inject questionings and problems into the minds of their colleagues. It’s only after a couple of defining events -- a woman (played by Selena Gomez) giving birth without a doctor in the settlement to help, and the fall of an old man picking apples -- that give them the idea to strike.

What follows is a carefully filmed game of power between the workers and those who own the land. Special attention to given to the brains of the operation, Franco and Wolff, who carefully stay apart from the spotlight, while feeding enough ideology to the leaders and those that are supposedly in charge.

There are big speeches, and surely they seem more relevant than ever as they analyze the way that capitalism and its economy of maximum profit for the owners has its negative impact on those who are at the bottom. The film works in terms of positing these ideology-filled speeches, from each side. These speeches are effective in large part because of the great quality of the cast, which includes names like Vincent D’Onofrio, Ahna O’Reilly, Jack Kehler, Scott Haze, John Savage, Robert Duvall, Ed Harris, Josh Hutcherson and even Bryan Cranston, who steals his scene as the sheriff.

Though interesting, much time is occupied by observing people on stands making speeches, which makes for a visually uninteresting film. Still, the passion and talent of the actors is the main showcase here, which brings up Franco’s real talent as an actor’s director who can surpass his own tics and wants for a serious project like this one.

While In Dubious Battle may go unnoticed, it might be the first fully-accomplished work of the actor turned director, who has made a politically-aware drama that feels like it is needed in a landscape where American films don’t dare to speak up about anything.

Do you feel this content is inappropriate or infringes upon your rights? Click here to report it, or see our DMCA policy.
James FrancoJohn SteinbeckNat WolffSelena GomezVincent D'Onofrio