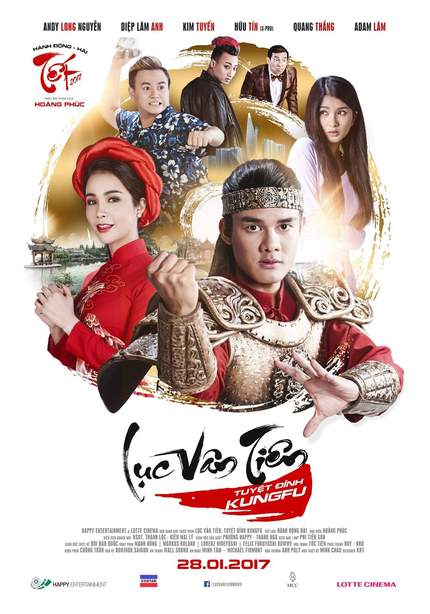 It's been a few months since Happy Entertainment began teasing director Hoang Phuc's latest, Luc Van Tien: Tuyet Dinh Kungfu. As such, with two teasers long past, a third teaser arrived this week along with an official trailer that guarantees plenty of stylish and grand martial arts action to accomodate the ensuing comedy and spectacle.

At the center of it all, of course, is Jackie Chan stunt team member, martial artist and stuntman Andy Long Nguyen who reached a milestone in the years since he started working in stunts, hailing from his home village in Pforzheim, Germany. Nguyen makes his acting debut in the title role inspired by Vietnamese folk lore as a kung fu warrior in search of his lost love, and lo and behold, he'll be facing a horde of equality talented action actors representing today's generation of martial arts and screenfighting athletes, including Andy Le, Brian Le and Du Au of Martial Club, and Felix and Lorenz Ruwwe of Young Masters to name a few.

The film is slated to release just in time for Tet holiday on January 28 which should garner a sizeable audience that weekend, and a hopefully worthy premiere for its performers and its rising star. No less, I'm sure Chan himself couldn't be prouder.

Watch the new teaser and subsequent trailer below.

Do you feel this content is inappropriate or infringes upon your rights? Click here to report it, or see our DMCA policy.
Andy Long NguyenHoang PhucLuc Van Tien: Tuyet Dinh KungfuMartial ClubVietnamYoung Masters