ŻubrOFFka 2016 Review: In BALCONY, Toby Fell-Holden Puts His Finger on the Pulse of Brexit 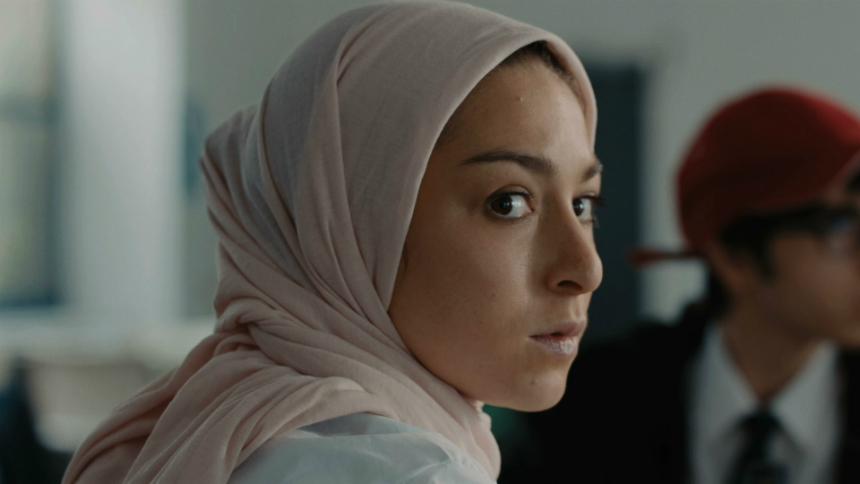 Small film festivals really are the best, both in terms of vibe and the sense of inclusion they give. Short film festivals are particularly cool too, either because they're having to fight so damn hard for attention or simply because they're run by some of the youngest (or maddest) people you're likely to see in film. Whatever the reason, the ŻubrOFFka International Short Film Festival is definitely one of those festivals that is doing it right.

Straight off the bat, it's a festival located in a part of Poland known for it's distinctive zubrowka (bison grass) vodka, which in itself is awesome, no? But if that wasn't enough, they're also the kind of festival that kicks off by mixing Alfred Hitchcock's silent classic Blackmail with a live score by English dubstep legend Kode9. And yes, that is as intense and ingenious as it sounds. There was smoke machines and bison-shaped, green-laser-emitting disco balls and everything!

Beyond that, they're completing the tick-box of grass-root festival essentials by playing in diddy rooms in what look like university faculties and playing mind-bending, otherworldly music video gigs on good old-fashioned pulldown projector screens in night clubs. (Fuck yeah). But to do the festival justice, it has a serious side too. Something which films like Toby Fell-Holden's Balcony, sitting amongst a serious and weighty international collection of competition shorts titled "Whole Wide World," definitely helps it achieve.

So on with the review (I need to stop forgetting that nobody cares about the vodka or the disco balls). Well, Balcony is certainly no light matter. It's the kind of film that some viewers might appreciate a "this film may contain shocking scenes" warning beforehand. But it is also full of raucous, English working-class humour, and it's a film that is told predominantly through the strong Cockney voice-over of Tina (Charlotte Beaumont) - which as a Film London backed project perhaps shouldn't surprise anyone.

Opposite her sits Genevieve Dunne as an Afghan refugee named Dana, the film's enchantress. Both at an age of comprehensive education (that's highschool to non-British readers), the two girls experience the kind of teenage bullying troubles you might expect, and it drives them together. But the real hotbed in this film, and the setting where most of it takes place, is the thorny council estate they both live on.

As so many English (and also French) films have previously shown, estates are real cultural mine-fields in Western-European culture. Often built in the 60s - as a vision of the social housing of the future - these high-rise communities were crammed into new appartments with little communal planning beyond the flats themselves; and the result is a social fabric which has inspired masterpieces as far apart as Anthony Burgess' Clockwork Orange to Andrea Arnold's Red Road. And now we can also add Fell-Holden's Balcony, because the short opens with Tina talking about how "everyone on the estate wants to fuck" Dana.

What transpires, however, is a real culture of hostility to Dana and her father. We hear boys on the estate shouting "Oi, oi, Taliban" and the like at them throughout. Rumours also abound about what they get up to, and ultimately it leads to tragic consequences. What we unfortunately see is a country with a known history for welcoming refugees (to idealise things slightly) turned into a stark concrete jungle where forms of difference are not tolerated, and instead targeted and victimised.

This little vision of Britain has been doing the rounds on the international festival scene for some months now (at least since the London Short Film Festival last January), and it has even gone on to win awards like Best British Short at the Iris Prize festival and a Crystal Bear at Berlinale. With all the nastiness that came up in the build up to Brexit, and since, it's hardly a surprise; and Balcony has in many ways seemed like the perfect companion piece to the country's political Zeitgeist (shorts always having their finger on the pulse so much better than features).

Thematically, then, what Balcony ultimately reveals is a Britain which projects its own ugliness onto those who are newcomers to it. And as a victim of child abuse, Tina is definitely no exception in projecting the horrors of her own family life onto the refugees. What emerges is a filmic barb pointed right at the viewer. How much do you buy into the prejudiced fictions of the film's world as you watch it? And how much of what is really going on do you actually see? In a supposedly "post-truth" world, they're certainly interesting questions for us all.

What perhaps makes this film most interesting, however, is the lesbian dimension it adds. In a time where genuinely good British lesbian films are few and far between, it is certainly striking to see an LGBT film (even if the director himself cannot claim to be a lesbian) tackle some of the most major, wider social issues of the moment - and in such an incisive and current way. It really demonstrates the full potential that LGBT themes have to move beyond just topics of sexuality themselves.

The actresses also take up this multi-dimensional task with real skill. Dunne's bashful modesty as a sharp-minded and witty Afghani is delightful to watch, and Beaumont's striking screen presence definitely makes you look forward to seeing more of in future. The film is also rather slickly made, and points to a London scene that is definitely pulling in some great filmmaking talent from across the globe. The sound design in this film seems particularly fantastic: the odd throbbing electrical sound effect or slow-mo thump of a menacingly kicked football really adds the atmosphere of hostility that this short paints.

With such obvious skill apparent in this film, let us hope that the Brexit this film so mindfully foreshadowed will not damage film financing so significantly in Britain that future projects like this cease to receive support. Instead, let us wish for a bright future for Fell-Holden (himself the product of many different cultures) and the diverse cast and crew he worked with.

NB. Subsequent reviews may include additional trite digressions on bison grass vodka. This reviewer is unfortunately in no way sponsored by Polish liquor companies.