South Asian 2016 Review: MAROON, A Tale of a Man Trapped With His Worst Fears

When a professor's wife goes missing, his marbles go along with her in this psychological thriller that poses more questions than it provides answers. 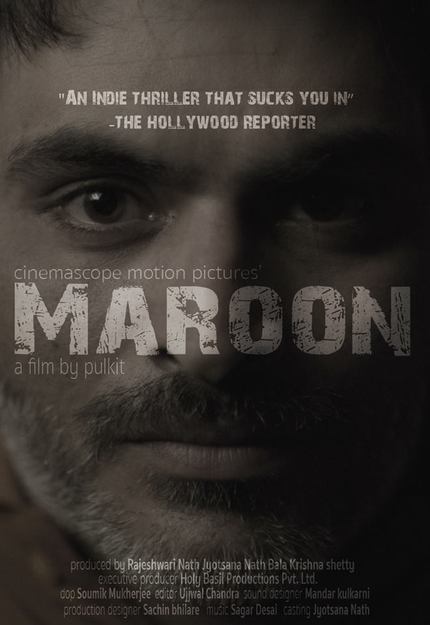 In Maroon, veteran character actor Manav Kaul plays an associate college professor whose wife goes missing, and it's not too long before his sanity goes along with her.

Manav Kaul plays Saurabh, an associate professor of literature at a liberal arts college in India. One night he comes home to find his wife missing. After calling around to her friends and workplace he places a call to the police to report her absense, and this is when things start getting really strange in the new feature from first time director Pulkit that premiered at Mumbai's Jio MAMI event in October and landed in North America for its US premiere at the South Asian International Film Festival in New York last week.

Saurabh reports his wife's absense to police, who begin to question the why's and wherefore's of the couple's relationship which dredges up nasty little secrets about infidelities and shattered dreams for the husband who seems to genuinely miss his wife, in spite of her philandering. Meanwhile, a young college student named Sakshi appears on his doorstep to console him after missing him in class for a couple of days.

When Sashi sees her grades mixed in with a pile of other students' work, she's nonplussed at her results, but seems more than enthusiastic to barter her way into a higher mark. More and more people interject themselves into Saurabh's tentative grief over the coming days, which leaves him in a state of shattered self-worth and disassociation from reality, even as various truths become more clear while others bury themselves beneath layers of obfuscation and possible guilt.

First time writer/director Pulkit does justice to a tricky set of circumstances in Maroon, a film which could've been disastrous in the hands of a less confident director. While Pulkit understands his constraints and utilizes them wisely, it is all in the service of the story, and never do his limitations becomes outwardly apparent to the viewer. Maroon is a film set in a single location, which goes a long way toward moderating budget concerns, but also proves thematically important as the film is the story of a man who doesn't leave his home for the duration of his wife's absense. As a result, the viewer is a party to his paranoia and claustrophobia in a way that a more expansive production would've certainly mismanaged.

The small ensemble cast also does a fine job of knowing their roles and supporting the lead, Kaul, who holds the weight of this film on his shoulders with remarkable confidence. No more than half a dozen actors make on-screen appearances, but each of them is aware of the part they must play in supporting Kaul on his way to success. Most effective in this realm are Saurabh Sachdeva as Inspector Negi, the police officer assigned to the wife's disappearance, and Suneel Sinha, who plays Dr. Abhay Kumar, a psychiatrist assigned to keep Saurabh calm as the investigation regarding his missing wife goes on.

However, it is no secret that the anchor and heart of this film is Manav Kaul, and without his exceptional performance as Saurabh, the film would fall apart. Kaul embodies the academic with a heart of glass, a man who finds out that his wife has been cheating on him with a co-worker of hers, but still pines for her as she is missing because she is the only love he's really known, no matter how toxic their relationship. As, one by one, the threads of Saurabh's sanity begin to pull apart, we are able to watch Kaul's performance turn from flustered and frightened to manic and guilt-ridden at the possibility that he was responsible for all of this.

Unfortuntely, we are never really given a straight answer in Maroon, director Pulkiit chose to intentionally leave the facts of the story vague enough for viewers to draw their own conclusion. However, eagle-eyed viewers will likely find the evidence they seek if they look hard enough. As India's independent cinema expands and diversifies, it's wonderful to see films like this find a place in the international marketplace.

Maroon isn't the kind of film that will make Pulkit a star, but it is definitely the kind of film that should earn him a second chance and a bigger budget to hone his craft. I, for one, cannot wait to see what he does next. Maroon is an exceptional film that deserves the notice of the indie film world, and I hope it finds an audience both at home and abroad.

Do you feel this content is inappropriate or infringes upon your rights? Click here to report it, or see our DMCA policy.
Manav KaulPulkitSouth Asian International Film Festival