Review: JACKIE, A Sublime And Intimate Look At An American Tragedy 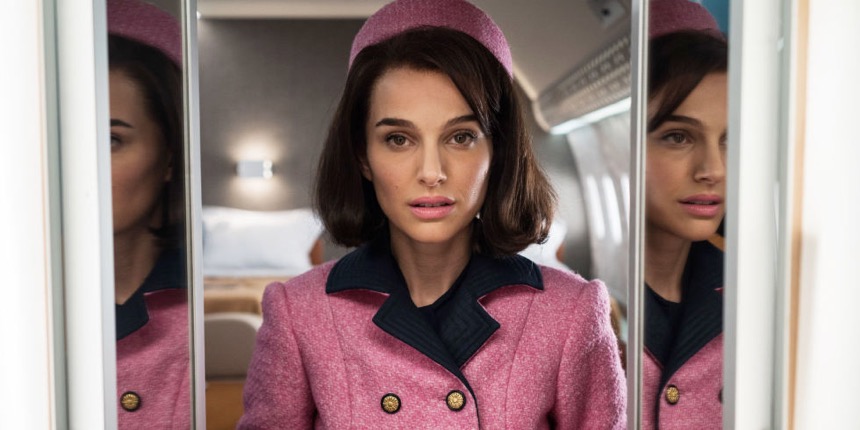 Star-driven biopics are a dime a dozen in the annual awards race yet Pablo Larrain's searing new drama Jackie stands head and shoulders above the more conventional fare that flood theaters around this time of year. A deeply intimate story of one of America's most famous First Ladies, the film features what may very well be Natalie Portman's finest performance.

Told through a fractured chronology, framed by her interview sessions with Life magazine, the film shows us the life of Jackie Kennedy during her time at the White House, with much of the story devoted to the immediate aftermath of John F. Kennedy's assassination.

It's been a big year for director Larrain, who unveiled another unorthodox biopic earlier this year at Cannes. That was Chile's Academy Awards submission Neruda, a suitably elegiac love letter to the great poet. With Jackie, Larrain continues his exploration of strong, unique characters in intense political situations, and pushes his otherworldly filming techniques to new heights. He invests us in a time and a place, yet never allows its historical notoriety to become more than a backdrop, with a focus on a main character that is unwavering.

Larrain's undulating steadycam frequently follows Jackie through the hallowed halls of the White House, both as she guides a TV crew through her efforts to decorate the residence and then as she languidly glides through its long corridors following her husband's death, when the home is no longer her own.

Natalie Portman digs deep here in a way that we haven't seen since her visceral turn in Black Swan. Her portrayal of Jackie is always graceful, yet her poise is undergirded by a wealth of complicated layers that mask the complexities of her psyche in what for most can only be unfathomable situations.

Larrain's eye and Portman's power are a potent combination, yet Jackie would not be the tour-de-force that it is without a few key contributions. Noah Oppenheim's script gives Portman a spectacular voice and cinematographer Stéphane Fontaine, also behind Elle and Captain Fantastic this year, provides the film an intimate and supple feel.

Most remarkable among the film's technical merits is the powerful soundtrack from Mica Levi, who previously scored Under the Skin. The tonal, moody music melds with the story and character in a way that most scores could never hope to. It highlights the vacillating currents lying just underneath Jackie's placid gazes and listless shuffles.

Though deeply sad and unnerving in its account of a colossal trauma, Jackie pierces deep into a complex psychological tragedy with an impressive measure of respect. It draws out our shock just as easily as it does our awe. An elegant work that draws us all the way into its subject, Jackie's power will surely last well beyond this year's frantic awards race.