The new Scream Factory Blu-ray for DREAMSCAPE excels in every category, from picture to bonus features. 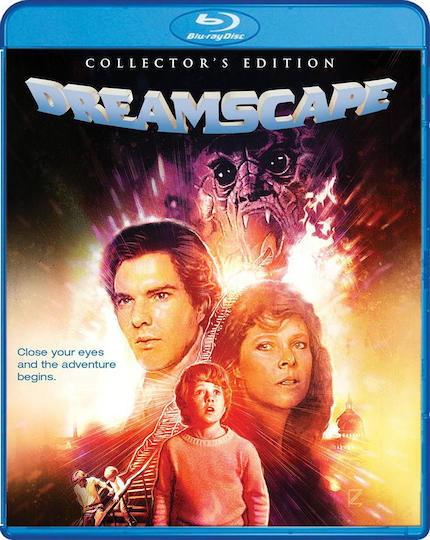 In 1984, a weird film called Dreamscape hit theaters. Starring Dennis Quaid as Alex Gardner and Kate Capshaw as Jane DeVries, this film is about a man with extraordinary powers of the mind. He's reluctantly brought in to assist on a secret university and government project --- his task is to enter the dreams of others in REM sleep. This is akin to lucid dreaming, but with an astral projection twist.

The problem is, Alex uncovers a shady conspiracy to assasinate the president and must fight back against the men in black --- or die trying. Upon its release, Dreamscape was a sleeper. It's found a cult following now that it's been out on "home video" forever, and Scream Factory has given this film the royal treatment.

Dreamscape was directed by Joseph Rubin (The Stepfather, 1987) and co-written by Chuck Russell (The Blob, 1988). In addition to Quaid and Capshaw, the all-star cast is rounded out by excellent actors, such as Max von Sydow (The Seventh Seal, The Exorcist), Christopher Plummer (The Sound of Music, The Insider), Eddie Albert (The Beverly Hillbillies, Rawhide), George Wendt (Cheers), and David Patrick Kelley (The Warriors, Twin Peaks).

The picture looks as good as its ever looked, likely, this is the best the film has looked since its theatrical release. I only noticed some mild flickering, and this was sporadic at best. The film looks fantastic with Scream Factory's new 2K scan. It sounds great, too.

The bonus features are top notch --- check out the full list below --- and amount to a mini film school of sorts. There are interviews with the director, co-writer, and producer, in which they discuss how the film came to be made after withering in a 20th Century Fox slush pile for years. There are also fantastic featurettes on the special effects of the film, an interview with star Dennis Quaid, and another with David Patrick Kelley.

Dreamscape from Scream Factory is out on December 13, and I highly recommend it for fans of excellent '80s films. It has lots of action, laughs, great acting, fun special effects, and awesome writing. I had never seen this film before, and was very pleasantly surprised by what a solid film it is.

Learn more on Scream Factory's site here and check out the vintage trailer below.

Do you feel this content is inappropriate or infringes upon your rights? Click here to report it, or see our DMCA policy.
Dennis QuaidDreamscapeKate CapshawScream Factory