Review: MANCHESTER BY THE SEA, Lonergan's Latest is Earnest if Predictable 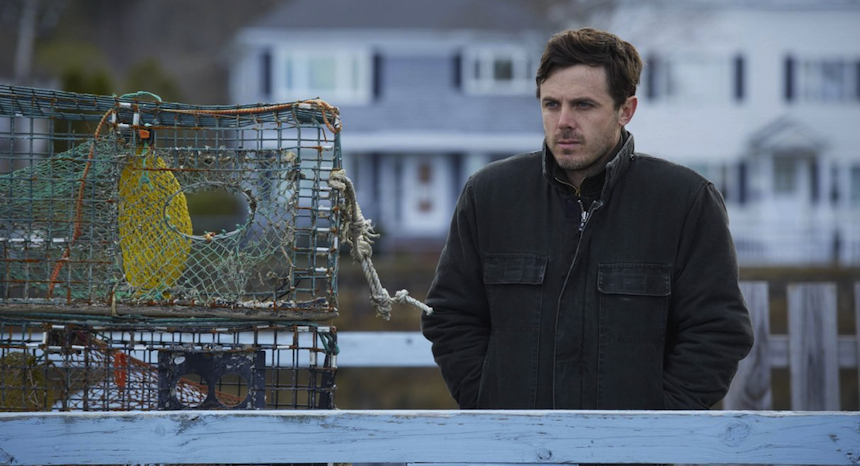 To be sure, there’s a lot that’s right, even terrific, about Manchester by the Sea. Writer/director Kenneth Lonergan’s ear for dialogue remains as acute as ever—not just in nailing the the way the residents of the titular northern Massachusetts town speak, but in also simply evoking oceans of emotional subtext with the sparest of phrases and sentences. And certainly his compassion hasn’t abandoned him in telling the story of Lee Chandler (Casey Affleck), a traumatized father who finds himself faced with the prospect of having to raise the son, Patrick (Lucas Hedges), of his late brother Joe (Kyle Chandler). Though the elements are here for a miserablist working-class melodrama, Lonergan instead infuses his film with a lot of warmth and unexpected humor, with Lee and Patrick developing a kind of buddy-comedy rhythm in some of their scenes together.

And yet, for all these not-inconsiderable virtues, Manchester by the Sea—riding into its theatrical release on a wave of near-universal critical hosannas—left me feeling strangely unmoved. For one thing, there’s the narrative structure Lonergan has tried to adopt for this film. Manchester by the Sea is in part meant to be a mystery of sorts, with flashbacks gradually revealing why Lee is, at the beginning of the film, living in a basement in Boston, barely eking out a living as a janitor in a bunch of apartment complexes, and spending his evenings sitting around in bars drinking and getting into random fights with strangers. The way Lonergan has placed these flashbacks in the film are also meant to suggest Lee’s own psychological recall, with events and images he sees triggering certain memories.

Formally speaking, this is more ambitious than what Lonergan attempted his feature debut You Can Count on Me and his follow-up Margaret. But while the structural adventurousness is admirable, it also leeches some of the cumulative impact away from the story it tells, of an emotionally numb, regret-filled patriarch slowly learning to open his heart to people again. We’re too busy wading through the narrative thickets to entirely access the raw beating heart at the center of it all.

A more immediate disappointment of Manchester by the Sea, however, is that this film is simply no Margaret. That 2011 film, unceremoniously dumped into theaters after four years spent in post-production and legal limbo before a small but vocal crowd of critical supporters helped bring it back into the spotlight, remains a stunning achievement, the kind of grand folly that pulses with the exhilarating feeling of a filmmaker trying to put everything he knows about life into one movie, frequently risking messiness to hit higher emotional peaks and articulate deeper human truths. But there’s more to Margaret than mere ambition: In telling the tale of a teenager dealing with the effects of grief and guilt in her own self-dramatizing ways, the film proved to be, among other things, perhaps the most brutally honest coming-of-age drama to come in a while (a high bar for the genre that this week’s The Edge of Seventeen, for all its virtues, never quite clears).

Individually, each scene in Manchester by the Sea is a marvel of writing and acting, the characters and settings feeling colorful, authentic and lived-in. And overall, Lonergan’s refreshing lack of sentimentality in charting Lee’s gradual breaking out of his emotional shell is certainly nothing to take for granted. But one can’t help but miss that last ounce of fearless operatic emotion that made Margaret so imposing, as profoundly wise as it was dramatically electrifying. By comparison, Manchester by the Sea, feels more pinched and, in the end, more predictable. For all the detours the film takes in its narrative, the film ultimately goes where you expect it to and nothing more,  ending with a scene of reconciliation that, however honestly wrought and beautifully observed, still feels a bit disappointing in its inevitability than truly satisfying.

Kenji Fujishima is a freelance film critic, contributing to Slant Magazine, Paste, Brooklyn Magazine, Village Voice, and The Playlist, among other outlets.

Do you feel this content is inappropriate or infringes upon your rights? Click here to report it, or see our DMCA policy.
casey affleckKenneth Lonerganmanchester by the seamichelle williams

More about manchester by the sea