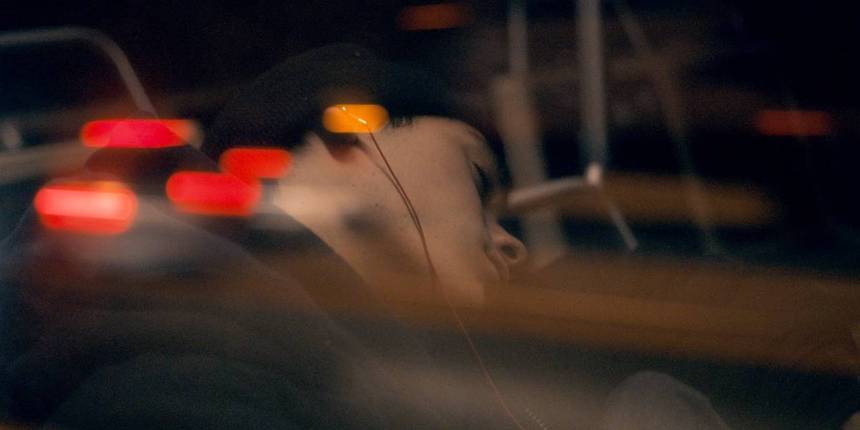 Randall Okita's debut feature, The Lockpicker, screened as part of the Vancouver International Film Festival's new Future // Present series, which showcases emerging directorial talent in Canadian film. The film is a claustrophobic -- mainly shot in tightly held closeups and from confining angles -- intimate portrait of a teenager, Hashi, a seemingly average kid who nonetheless find himself an outsider traversing the vicious landscape that is high school.

Hashi (played by Keigian Umi Tang) is haunted by the memory of a friend (and crush) who recently committed suicide by jumping off their high school's roof. She remains a constant presence in Hashi's daily life, immortalized by recordings he's saved of their old phone conversations. He plays these audio loops over and over, the girl's disembodied voice mirroring the stifling repetition of typical adolescent life. School, home, work, home, school. Repeat.

When we first meet Hashi, he is lost and hurt, but still seems to be holding together some semblance of a life. He has a couple of friends, a little sister to look out for, a job, and possibly a new romantic prospect. There's also a summer sailing camp that piques his interest, offering a chance to put some distance (all the way to Vancouver!) between him and his chilly, nondescript Ontario town. Cruelly, though, the movie wastes no time stripping the bulk of these hopes away from him one by one. What makes Hashi and his situation unique dissolves a bit as the film begins to adhere to a fairly standard anti-bullying narrative.

Despite the formulaic dips and turns of the plot, The Lockpicker sustains an evocative, ominous mood that complements its moments of operatic intensity. Most impressive of all is Keigian Umi Tang, who, apparently, had never previously acted before being cast in this rather challenging, uncomfortable role. He brings a strange, detached charm to his character's wrenching vulnerability; it's like getting a glimpse into Travis Bickle's high school years.

For a first full-length feature, and a first role, Okita and Tang both prove themselves to be talent well worth keeping an eye on. If Okita can apply his impressive visual style to a narrative that's as innovative as some of his staging, he'll have no trouble achieving greatness in the future.

Do you feel this content is inappropriate or infringes upon your rights? Click here to report it, or see our DMCA policy.
2016canadianfilm festivalkeigian umi tangrandall okitathe lockpickervancouver

More about The Lockpicker