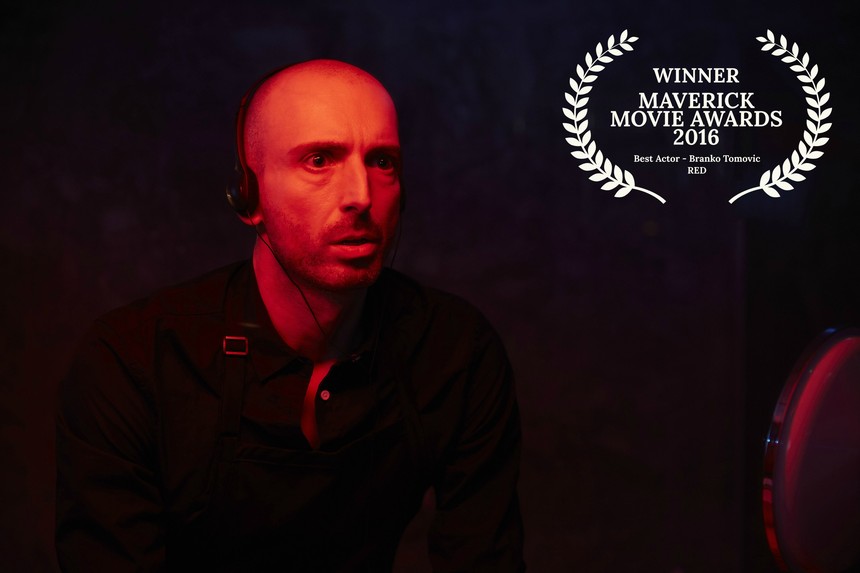 The British-German thriller Red is a dark, edgy, intense and atmospheric thriller set in the underground world of illegal organ trade. It's the directorial debut of Branko Tomovic (24, Fury, The Bourne Ultimatum) and also stars Dervla Kirwan (Ondine, Ballykissangel, The Silence, Doctor Who) and Francesca Fowler (Doctor Who, Rome, Closure).

It screened this week at the prestigious San Diego International Film Festival and Branko also just won the Best Actor Award at the Maverick Movie Awards 2016 (past winners include Robert Redford, Sophia Loren, Isabella Rosselini, Tom Berenger, Armand Assante) for playing the leading role Niklas, a surgeon tormented by self hatred and guilt who is looking for a way out of this dark world.

Niklas performs regular illegal surgeries for the red market and works together with Mia, a young prostitute who lures her clients in and drugs them. Niklas is looking for a way out of this dark world, but owes his life to their violent crime boss Ed, who would rather kill him then let him go.

The film highlights the dark and brutal world of the illegal organ trade. It shines a light on the people involved in such operations. It's a character study of a damaged and guilt-ridden man who fell victim to the red market but desperately wants to leave all this behind him. The crux of the story is the climax point, where he is forced to decide whether to save his own life or the life of an innocent child. It's very interesting that the film is told not from the victim's perspective what you usually hear or what you might expect, but instead from the other side, the people who are responsible for these atrocious crimes. They are cruel, ruthless, unforgiving.

The film is beautifully shot, despite the crimes and subject matter, it all looks very elegant and atmospheric. It's interesting to see that the only colour that jumps out is the colour red, which we always see when there is danger around. The tension rises as we go along in the story and get to know more about the characters. As we find out what is actually going on and what is at stake, the pace builds up all the way until the final scene where the central character finds himself in a seemingly inextricable situation. The surgeries itself are very powerful, as you don't see much actually. Through masterful editing it's all in your head which makes the gory and bloody business all more powerful. The only piece of composed music is Beethoven's Symphony 7 Allegretto, which Niklas is always listening to when he performs a surgery, it is a way for him to mentally escape the situation. The stunningly beautiful composition stands in strong contrast with the horrible and bloody task Niklas is performing.

The acting ensemble is extremely strong with brilliant and honest, subtle and very powerful performances throughout. Tomovic plays the isolated and tormented surgeon with extraordinary emotional depth which makes you emphasise with him, although he is performing these horrible crimes. During one of the surgeries where something goes wrong, you can actually see his pupils dilate to the maximum, which is very intense. Fowler's portrayal of Mia, the young prostitute hardened by life is very complex. The mix between naivety and innocence and on the other side her coldness are beautifully portrayed. And Kirwan as the cruel, violent and powerful crime boss is just impressive. It's an excellent casting choice as you would usually associate such a powerful character with a man, but Kirwan's performance is so strong and authentic as the puppet master behind these crimes.

You can see that Tomovic worked with many great film directors in his acting career, as Red is a very intelligent, well constructed and emotionally charged directing debut. The director's vision and ideas are very interesting and unique. The ending especially will leave you on the edge of your seat and wanting more.

Do you feel this content is inappropriate or infringes upon your rights? Click here to report it, or see our DMCA policy.
Branko TomovicDervla KirwanFrancesca FowlerMaverick Movie AwardsRedSan Diego Film festivalthriller