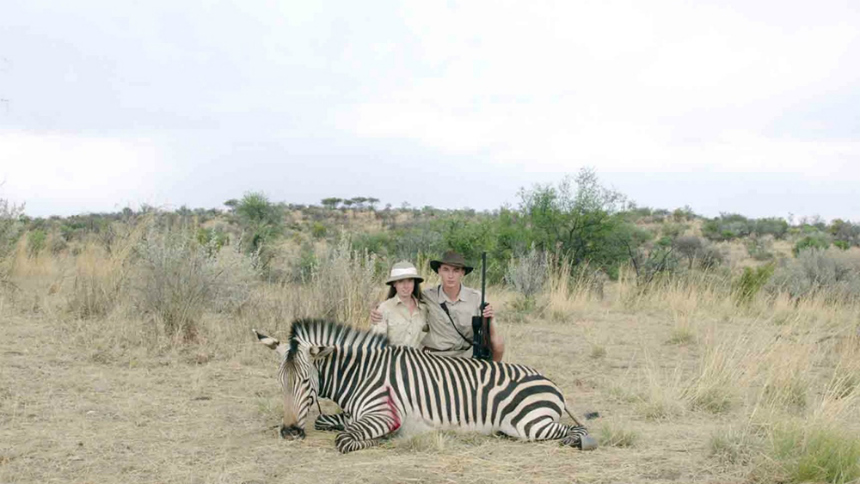 A much loved Austrian auteur resumes his excellent documentary filmmaking form with his deliciously repulsive new offering, Safari. Picking up on the heightened realities he developed with In the Basement, Ulrich Seidl now follows his forever entertaining Austrian country folk on a series of goonishly grandiose hunting trips to a wildlife farm in bountiful South Africa.

Initially, this latest doc's rhythms, visual symmetries and ingeniously comedic timing feels like an almost literal continuation of Seidl’s prior film. Rather brilliantly too, the “documentary” actually starts with a characteristically well-humoured fanfare: We find a distant man in a kempt green jacket standing slap bang in the centre of the screen. He purses his lips and plays from a glistening horn a slow, unflinching call to hunt.

This invitation's expert comic timing seems typically on point for Seidl, and yet in some ways something has also changed. On this piece, the Austrian luminary has been forced to run his scenes for an unusually long time for him, allowing him to take in the full horrors of the hunts he so voyeuristically observes. And this does take away something from his former films’ punchiness, meaning at times you do lose the intensity of your recoiling amusement or become desensitised.

The wildness of the South African bush does also prevent the director from achieving quite the same relentless artistry that he was able to capture in the almost scientifically symmetrical mise-en-scene of In the Basement. However, a whole series of carefully staged interviews with his subjects ensures that Safari retains a decent amount of its predecessor's magic. The people Seidl interviews also remain exactly the same types he has singled out throughout his career: opinionated, unusual, repulsive individuals from his darkly spirited motherland.

I mean, maybe Seidl wouldn’t say they’re repulsive. But there’s a definite, inherent misanthropy in his films -- and particularly so towards the end of Safari. In fact, part of this comes largely from the very way he documents people. You could say that he has a quite consistent tendency to mercilessly confront viewers with corpulent, unattractive and sweaty human forms that don’t seem particularly endearing. You could argue that these figures are a refreshing alternative to the beauty norms of most other films. But in Seidl’s hands you hardly end up feeling drawn to them.

There’s some excellent foley work on this film too, which really ensures that you can hear (and I want to say almost smell) the bodily functions of the unusual specimens you see on the screen. Then there’s also the fact that -- in what is a real masterpiece of Austrian “feel bad” cinema -- the things the interviewees say, and the glee they feel, clashes so repulsively and bathetically with what you see.

Seidl characteristically sets them off on some particularly provocative topics too. He meticulously gathers their thoughts on guns, race relations, death and man’s place in it all; and at times, what they say proves to be quite genuinely troubling -- despite the perniciously euphemistic language they use. At the same time, though, you can never quite resist being sucked into Seidl’s persistently perverse sense of humour.

Still, it does at times seem disconcerting the way this film never truly gives a voice to the black South Africans who help their somewhat maniacal Austrian bosses. But that’s not to say Seidl doesn’t pay attention to their lives. He frequently takes his patient time to observe the brutally efficient butchery chop-shop these men seem to run behind the scenes of this semi-industrial slaughter process.

These abattoir scenes and the shoots themselves are definitely not for the fainthearted, seeing as Seidl remorselessly observes the hunting process from its start to finish. Yet somehow, amongst all that, he captures some kind of weird ambivalence in the walking egos he films. As a result, this film feels almost more urgent (and less amusing) than Seidl’s work normally does; it's as if in some way, Safari is also a kind of environmentalist plea.

Though even if that might not really be true, Safari definitely continues to be a provocative piece of filmmaking, and it once again places Seidl right on the exciting forefront of what could and should be considered as documentary filmmaking. His documentaries remain forever worth watching as a result.