A curious quartet of Blu-rays recently appeared from Kino Lorber Studio Classics. Today I'm looking at Road House (1948), Beware! The Blob, Fixed Bayonets!, and My Bodyguard. Each film is interesting it its own way and all are worth owning. Check out more details below. 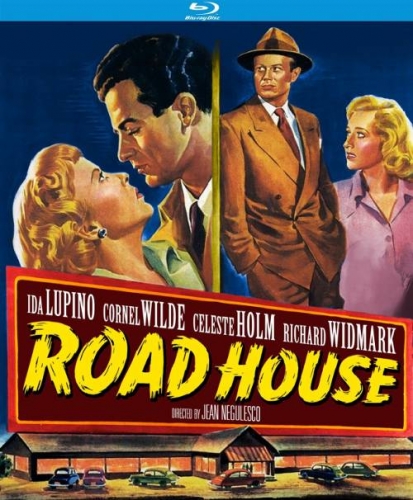 1948's Road House is a film noir classic that holds the distinction of being the only feature in which noir icons Richard Widmark and Ida Lupino shared the screen. That duo is joined in their shenanigans by the relatively innocuous Cornel Wilde, who essentially plays the buffer between Lupino's enrapturing lounge singer Lily and Widmark's lecherous club owner, Jefty.

When Jefty brings Lily out to his wilderness road house to entertain his guests and hopefully get a little action on the side, Lily is having none of it and she instead gravitates to Cornel Wilde's impossibly forthright Pete, the resort's manager. The pair manage to keep their illicit romance to themselves for a while, but when Jefty hears about it, all hell breaks loose and Widmark goes into full on maniac mode, an acting device he'd perfected through years of playing film noir heavies. In the end the battle between the savage Widmark and the whip-smart Lupino is the film's calling card as Cornel Wilde ends up being little more than a pretty face in this battle of wills.

Back in 1948 Road House was little more than a programmer to the higher ups at Fox, but the powerhouse performances of Lupino and Widmark lifted this project above relatively meager expectations. One cannot help feeling as though Fox left something significant on the table when they didn't team that pair up ever again. Widmark made a name for himself as a film noir icon in films like Kiss of Death and Night and the City, and Lupino was one of Hollywood's toughest dames. One can only imagine what other wonders they might have spun together.

Kino Lorber Studio Classics Blu-ray disc of Road House is rock solid in all departments. The image and audio quality of the disc is quite good, though not exactly revelatory. In terms of extras, Kino wisely ports over a pair of great features from the previously released Fox Film Noir Collection DVD. First up is an audio commentary with Eddie Mueller and Kim Morgan which is informative and informal as the commentators clearly share and affection for the film. More interesting to me was the twenty minute featurette “Killer Instinct” that explores the intersecting careers of Lupino and Widmark at Fox during film noir's heyday. A great disc for a killer film. 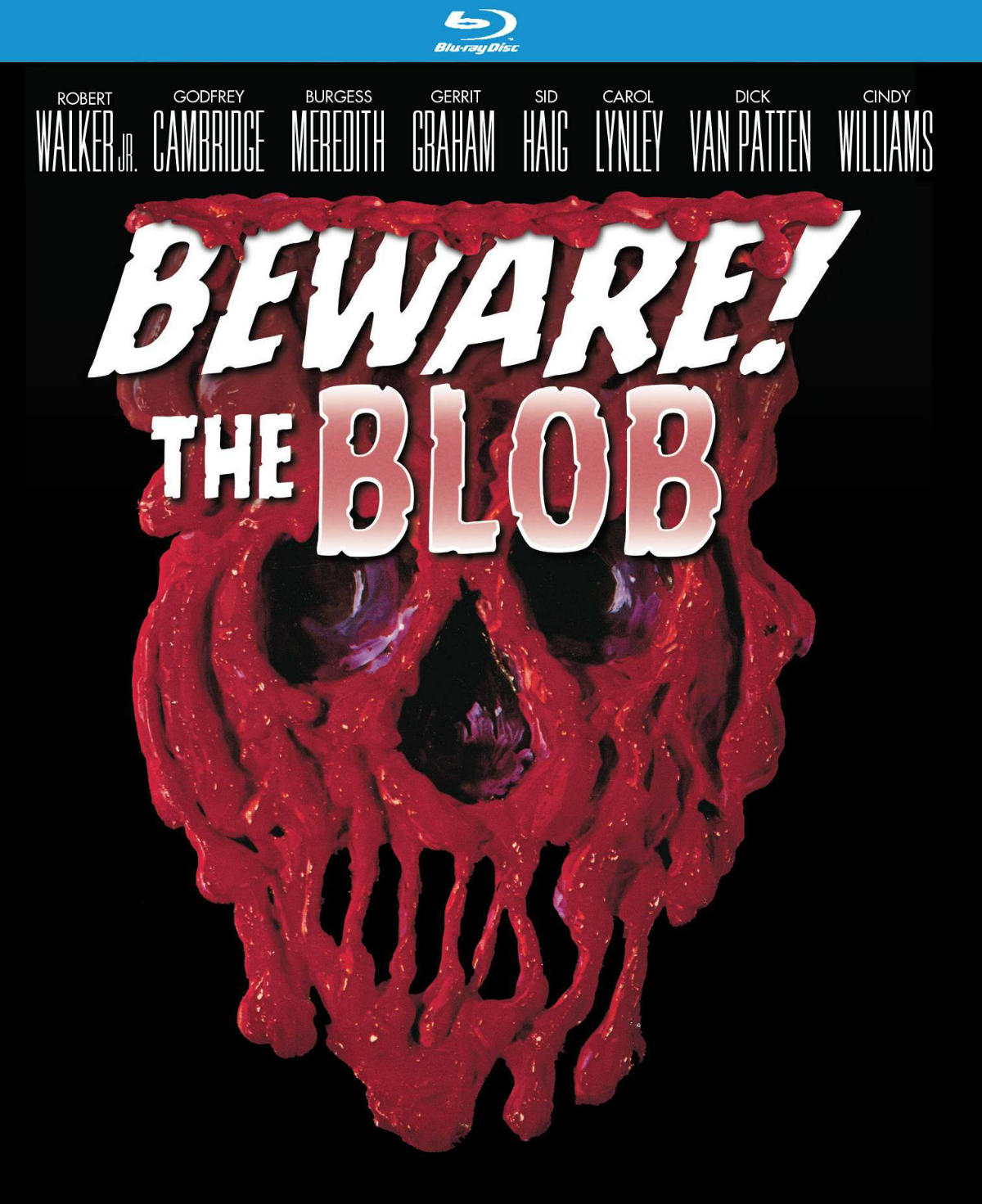 Beware! The Blob holds the distinction of being one of the goofiest sequels ever committed to celluloid. The Steve McQueen original was in no way scary, but this sequel, set fourteen years later and directed by eventual Dallas TV star, Larry Hagman, is a pastiche of ridiculous moments and d-list celebrity cameos that almost comes together to make an entertaining whole.

The Summer of Love is coming to an end in 1972, but don't tell the cast of Beware! The Blob. When a geologist played by Cotton Comes To Harlem's Godfrey Cambridge comes home with a frozen sample of the titular gelatinous menace, his amorous old lady inadvertently causes it to defrost, setting in motion a series of patently stupid events that see many early '70s TV series regulars whipped into action to stop it. Among those roped into this already ropey project are Sid Haig, Dick Van Patten, Gerrit Graham, Cindy Williams, and Burgess Meredith. Nothing in the film is as entertaining as playing “spot the has-been” while watching Beware! The Blob, however it's self-awareness goes a long way in maintaining goodwill toward this Laugh-In styled hit parade of goofy cameos.

I never thought I'd see Beware! The Blob look this good on home video. The image quality isn't reference quality and there are several instances in which the image is notably washed out and contrast diminishes to an unhealthy degree, but the fine detail never suffers, so I guess we count that as a win. The audio is perfectly fine with no major issues. The only extra is an audio commentary with historian Richard Harlan Smith that is certainly informative, but much too formal for my tastes on an out-there feature like this. 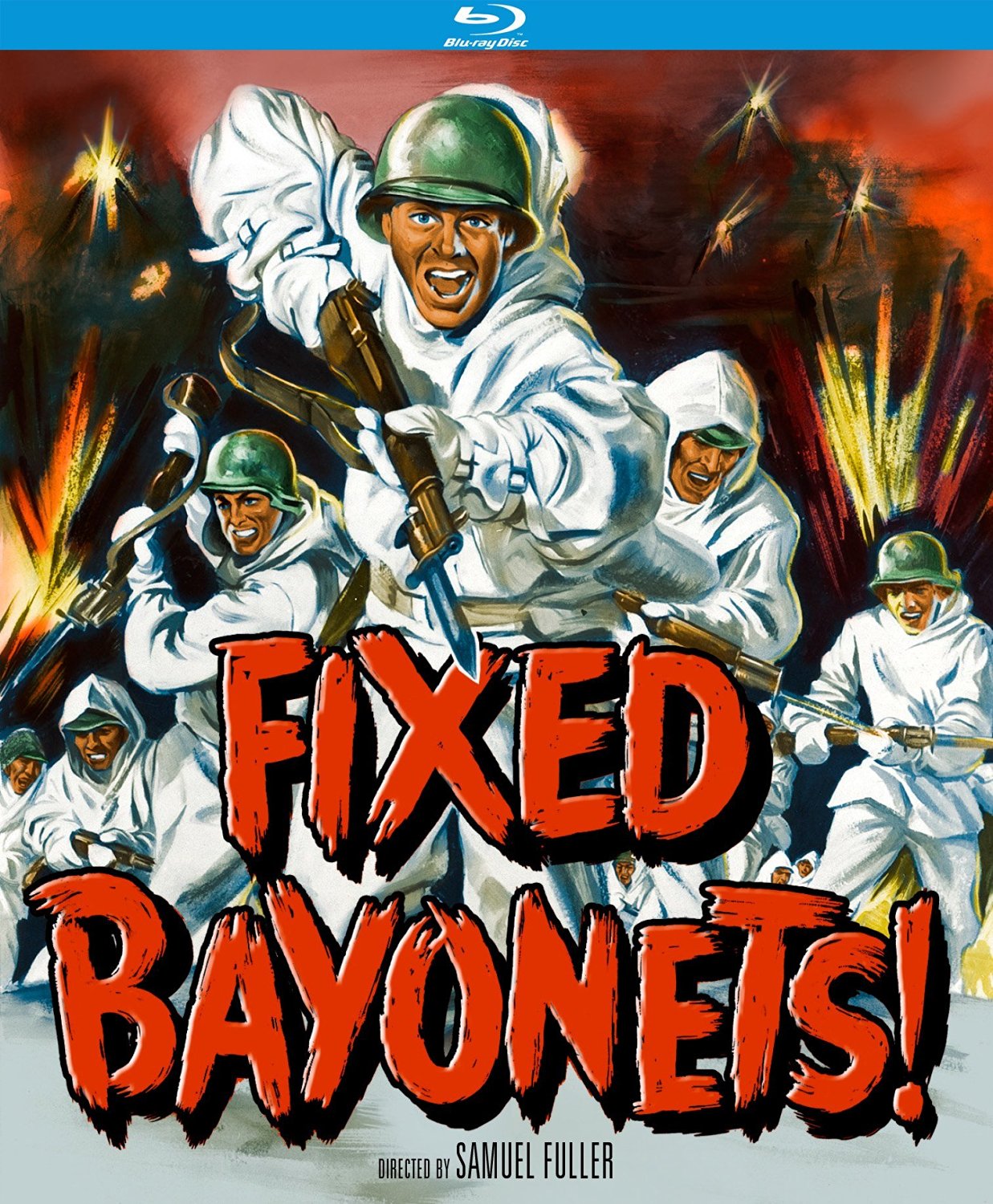 Sam Fuller's Fixed Bayonets! was his first studio feature following his groundbreaking The Steel Helmet, which marked the first film every made about the Korean conflict. This time around Fuller focuses on a troop that is left behind to defend the line against incoming Korean hostiles while the larger portion of the US military pulls back. There is definitely an air of fatalism in Fixed Bayonets!, however the film focuses far more on the male companionship within the ranks, as many Fuller films of the era did.

This film was released by the UK's Masters of Cinema earlier in the year and James Marsh wrote about it at the time saying,

Save for a few minutes at the beginning and end of the film, everything takes place on a single hillside or within the relative shelter of a cave in which the men shield themselves from enemy mortars. Fuller injects flourishes of stylistic and narrative invention throughout the proceedings. An elaborate single shot sees a lone soldier negotiate the slopes to take out an enemy position; a ricocheting bullet inside the cave destroys the men’s veneer of safety; a brutal rocket attack on an enemy tank is edited with rigorous intensity. It's a tough, on the nose piece of filmmaking.

I am, perhaps, less impressed with Fuller's flourishes than Marsh in this case, but there's no denying that Fuller seems to have made exactly the film he set out to make, and that's impressed in itself.

Fixed Bayonets! arrives on Blu-ray from Kino Lorber Studio Classics utilizing the same 4K master that the earlier UK disc used. It looks crisp and clean and the audio is right on the money. I have no complaints. The only extra is a group audio commentary with historian Michael Schlesinger and Sam Fuller's kids, Christa Long and Samantha. The commentary is a bit formal for my tastes, but it fits the feature and helps to flesh out some of the production details and themes of the film. 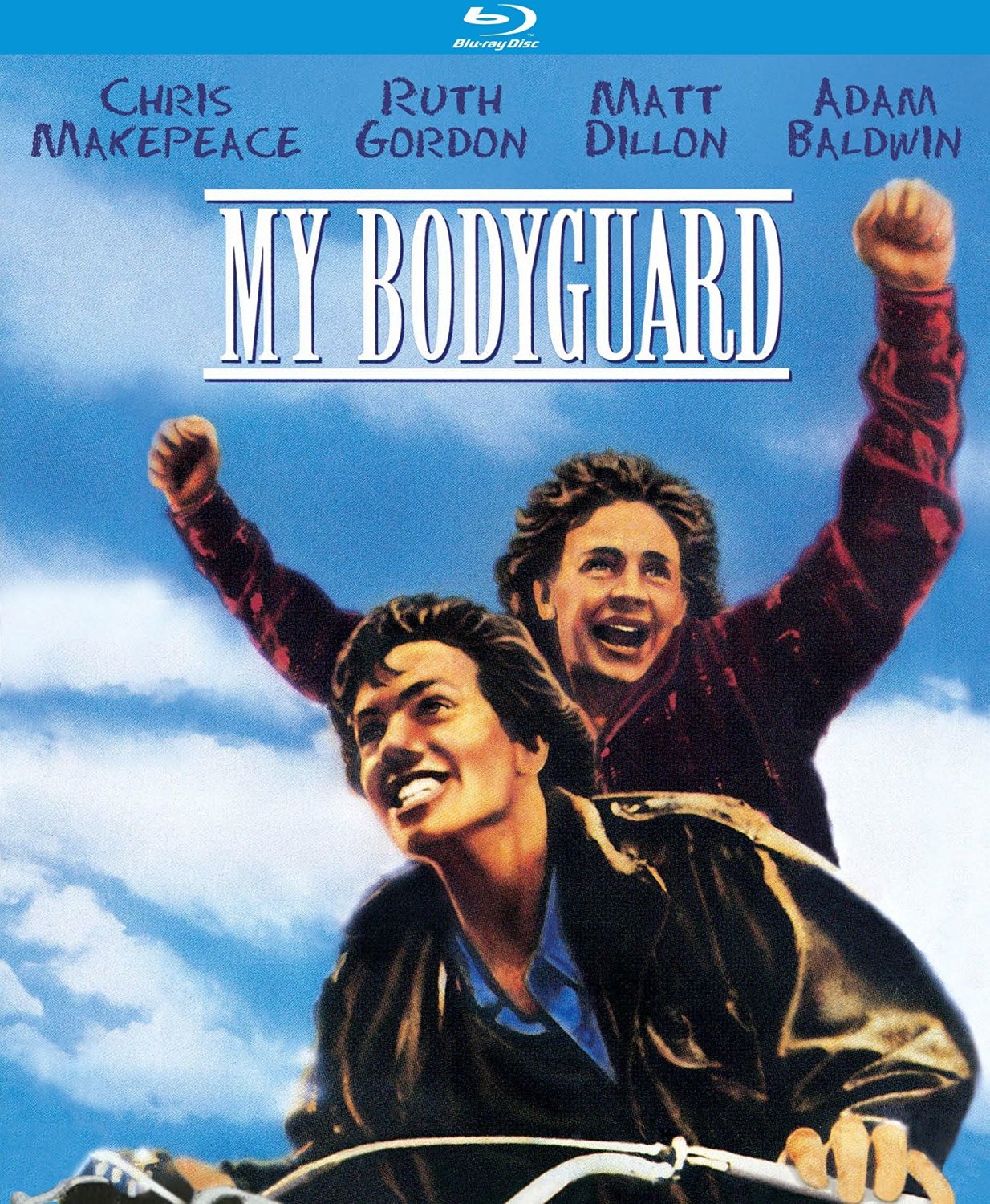 Chris Makepeace is one of those actors whose face is instantly recognizable to fans of '80s cinema, but not many of us could tell you where he is today. The star of films like Meatballs and Vamp made this 1980 feature with director Tony Bill and it has turned out to be one of his most endearing roles. It's a shame that Makepeace disappeared over a decade ago as he was a decent little performer, but at least we have his films to remember what his talent meant.

In My Bodyguard, Makepeace plays Clifford Peach, the new kid in school whose father runs a local hotel and who is forced into public school when his Dad can no longer afford the private academy he was accustomed to. His descent into the world of public high school designates him as an easy mark for school bully Moody (a young, svelte Matt Dillon in an early warm-up for his iconic role in The Outsiders). After getting extorted a few times by Moody, Clifford enlists the help of school pariah Linderman (Adam Baldwin), a giant rumored to have murdered his own brother.

The uneasy alliance between Clifford and Linderman eventually turns into a full fledged friendship and the pair get closer and closer as the film wears on. Meanwhile, Moody has employed his own bodyguard to counter Linderman's threat and the new quartet of antagonists must slug it out for supremacy, but not before learning valuable life lessons about trust and friendship.

My Bodyguard is a great film, and one that deserves rediscovery. Kino has done a great thing by allowing the film a second chance to find its audience.

The disc looks and sounds great, I'm quite impressed with the work that was done on My Bodyguard and can't say that I have any complaints. There is only one extra, but it's a good one. The feature audio commentary from director Bill and film programmer Jim Healy is invaluable as it allows the director to elaborate on his own emotional connection to an already emotionally rich film in a way that assists in creating a deeper connection with the viewer. I'll definitely revisit the commentary, and that's something I rarely do.

Do you feel this content is inappropriate or infringes upon your rights? Click here to report it, or see our DMCA policy.
beware! the blobfixed bayonets!kino lorbermy bodyguardroad house