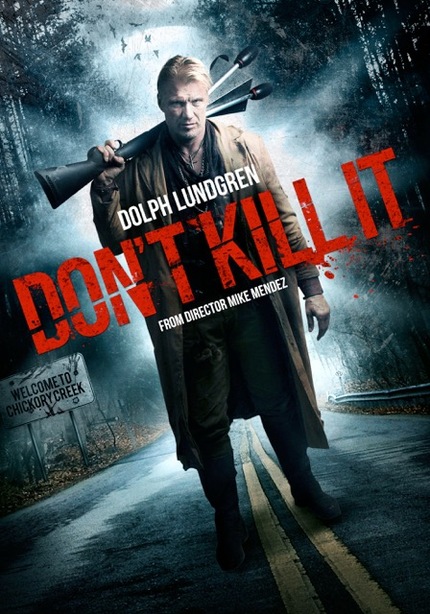 Director Mike Mendez knows how to have a good time. His segment in Tales of Halloween segment, "Friday the 31st" had me grinning from ear-to-ear, while Big Ass Spider! was a glorious throwback to drive-in monster movies. With Don't Kill It, Mendez teams with Dolph Lundgren who plays a "rough around the edges" demon hunter and I'm fully on board with that.

The first trailer has landed prior to the film's North American premiere at Fantastic Fest and it looks pretty wild. Everyone appears to be having a good time through the bloodshed.

Synopsis: An ancient evil is unleashed in a small Alaskan town leaving a trail of death and destruction as it passes from host to host. The only hope of survival lies with a grizzled demon hunter (Dolph Lundgren) who has faced this terror before. Together with a reluctant FBI agent he has to figure out how to destroy a demon with the ability to possess its killer.

The film was written by Dan Berk and Robert Olsen who crushed it with last year's thriller Body and who are helmming the Stake Land sequel, The Stakelander.

Don't Kill It will premiere at Austin's Fantastic Fest on Saturday, Sep 24 8:30pm.

Do you feel this content is inappropriate or infringes upon your rights? Click here to report it, or see our DMCA policy.
Dolph LundgrenDon't Kill itfantastic festMike Mendeztrailer