Blu-ray Review: CAT PEOPLE, Subtle and Stunning, All Over Again 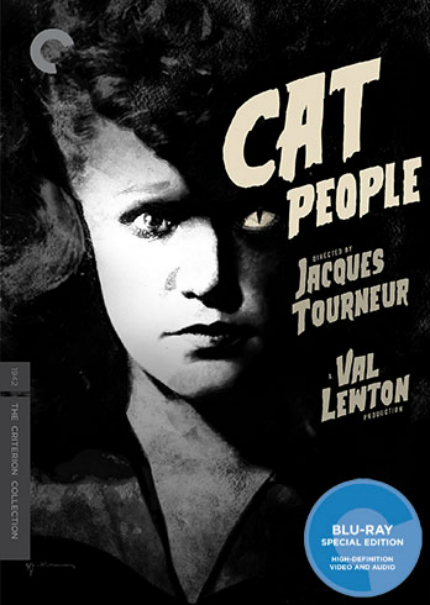 Shadows, shadows, and more shadows. Shadows are everywhere in Cat People (1942), and the first time I saw it, I thought it was an imaginative way to disguise its low-budget production.

So it is, but it's also far more than that because the shadows are employed to set a mood and to help stir up hidden emotions. Watching it on a beautiful, immaculate new Blu-ray from Criterion, I was struck first by the gorgeous black and white imagery; for whatever reason, movies shot in black and white and presented on Blu-ray strike me as super-fine visual delights, especially when the materials are so well presented.

If I remember correctly, I saw Paul Schrader's 1982 remake in a theater several years before I saw the 1942 original. Schrader's version, which is very much its own, very colorful animal, appealed to my younger self because of its overheated nature, complete with an often naked Nastassia Kinski. Long before the movie was over -- i.e., before David Bowie's theme song began slamming over the closing credits -- she had become an instant crush, and the movie was immediately filed among my favorites.

So it took me a while to warm up to the original, produced by Val Lewton, directed by Jacques Tourneur, and written by DeWitt Bodeen. As the years went by, I began to appreciate the accomplishments of the film more and more, especially when placed into the context of other films by Lewton and Tourneur. The more I saw of those, the more I appreciated Cat People, not only for why and how it was shot, but for what those shots, put together with courage and daring and artistic imagination, meant.

On this most recent viewing, I found myself feeling ever more deeply for Irena (Simone Simon), the Serbian immigrant who wants to be a fashion designer. She falls quite quickly for the dapper American, Oliver Reed (Kent Smith), perhaps in part because opposites attract, which would also explain why Oliver is drawn to the mysterious beauty of Irena.

Knowing enough about herself to recognize that she could pose a danger to Oliver, Irena still can't help falling for him. It's the worst kind of fatal attraction, the sort where one party knows of possible dangers ahead, while the other is blissfully unaware of any such possibility. Eventually, of course, Oliver catches on that Irena is not a good match for him, but by then it's too late to prevent the tragedy that is sure to come.

Filled with foreboding and drenched in sadness, Cat People is far too acutely self-aware to be dismissed as a B-movie. It may only run 77 minutes, but every one of those minutes is essential to understanding the characters and the mythology.

On this viewing, I felt myself empathizing even more with Irena, yet I felt pity for Oliver, too. Ultimately, she wasn't strong enough to resist her own shortcomings, and he wasn't smart enough to recognize his own limitations.

They both reached for the stars, and fell short.

An audio commentary is provided by film historian Gregory Mank. Recorded in 2005. it is jam-packed with information. Mank is a prolific author who has written often and extensively about films from the 1930s and 1940s, especially horror movies, and he shares a wonderful trove of insightful tidbits for the movie. At times, he sounds like the living embodiment of IMDb, but with a human voice and sense of history! He also shares excerpts of an audio interview he conducted with Simone Simon, which is a definite bonus.

Supplements include Val Lewton: The Man in the Shadows (2008), a 77-minute documentary by Kent Jones that I've seen before and am very happy to have on disc. It's a great overview on the creative producer, narrated by Martin Scorsese.

Cine Regards is a 30-minute French television show and included here is an episode devoted to Jacques Tourneur, recorded at his home in 1977, about six months before his death. Tourneur is in great form, displaying an often-caustic sense of humor as he dishes the truth (from his viewpoint) on Hollywood, France, and filmmaking. His comments on what the director does are very much worth seeing for any prospective filmmaker.

In a new, 17-minute interview, veteran cinematographer John Bailey talks about director of photography Nicholas Musurace with great admiration. Bailey, who served as d.p. for Schrader's remake, admits that he wasn't familiar with Val Lewton's work before beginning work on that project, but it quickly becomes clear that he studied it intensely. Because of his own, extensive experience, Bailey is able to break down exactly what Musurace did in order to achieve his effects, specifically dissecting three sequences. It's a marvelous piece that, again, would especially benefit prospective filmmakers.

Finally, the re-release theatrical trailer for the film shows how it was presented to the public. It's deteriorated condition is also a reminder of the art of restoration.

Criterion's edition of Cat People is, in short, stunning, and is highly recommended. It will be available widely on Tuesday, September 20.

Do you feel this content is inappropriate or infringes upon your rights? Click here to report it, or see our DMCA policy.
Cat PeopleCriterionJacques TourneurKent SmithSimone SimonVal Lewton