Review: HANDS OF STONE, Fleet of Foot, Light on Insight 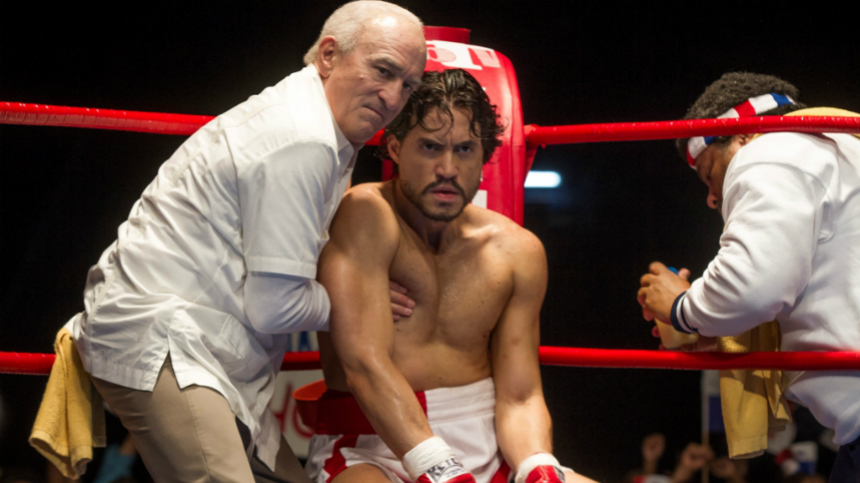 For more than three decades after Raging Bull was released in 1980, Robert De Niro wisely stayed away from the boxing world on screen. After all, once you've appeared in one of the most spellbinding and spiritually troubling cinematic experiences of all time -- and won an Academy Award for your performance -- why tempt fate?

For whatever reason, De Niro agreed to star in 2013's Grudge Match, which was more of an attempt at comedy than anything else, and now he has taken a supporting role in Hands of Stone, a biographical drama about real-life Panamanian boxer Roberto Duran, essayed by Edgar Ramirez.

De Niro portrays retired trainer Ray Arcel, who worked with many notable fighters before being forced into retirement by the New York mob in the early 1950s. Twenty years later, Arcel is introduced to the young, raw and cocky Duran by Duran's backer, Carlos Eleta (Ruben Blades). Arcel can spot Duran's potential right away but Duran must be convinced that he needs Arcel's help.

What follows is fairly predictable. The movie, written and directed by Jonathan Jakubowicz (Secuestro Express, an exciting kidnapping thriller), dodges back in time to show Duran's impoverished childhood, his early induction into boxing, and his later relationship with Felicidad (Ana de Armas), developing into marriage and children. After meeting Arcel, the movie then races through the 1970s, hurtling toward the most significant fights in Duran's career. 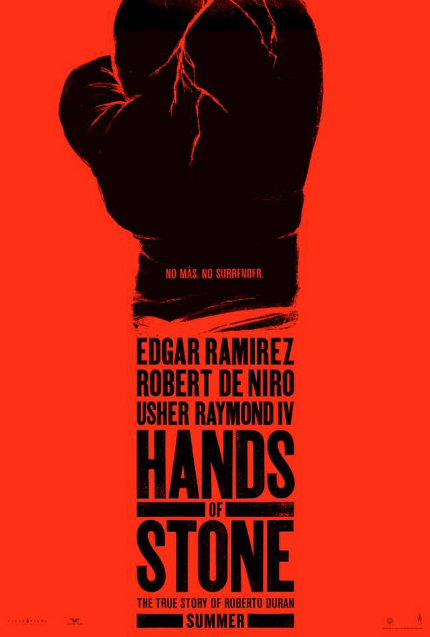 For U.S. residents of a certain age, such as myself, Duran will forever be known as the no más fighter, the boxer who quit a 1980 championship match against Sugar Ray Leonard. That hangs like a spectre over the entire movie, and, in advance of watching it, was the most intriguing aspect for me, especially since I saw a documentary on ESPN about the whole thing, featuring a recent meeting between the two fighters as they try to tackle what happened.

The doc, 30 for 30: No Más, directed by Eric Drath, has haunted me ever since I saw it, in large part because Duran appears to have been haunted since his actions in 1980. It raises questions about the mysteries of the human psyche: why do we do the things we do? Can we ever truly understand ourselves, much less anyone else?

Hands of Stone spends a good deal of time dramatizing events before, during and after the first two matches between Leonard and Duran and shows the ramifications that Duran faced after the infamous fight. Yet though it acknowledges Duran's shortcomings, it avoids digging too deeply into his famously tempestuous personality.

The movie prefers to follow a tidier narrative, which limits how deeply it can affect the viewer. Make no mistake, it flies at a steady and involving pace; Ethan Maniquis, who edited Secuestro Express, performs the same art here, resulting in a go go go movie. It's difficult, though, to shake off the feeling that this may be the official version, even if it doesn't always show Duran in the best light.

Still, Hands of Stone remains a pleasant diversion, deepened by Ramirez's lively, brutish performance and De Niro's firm and steadying presence, and enlivened by the sparkling de Armas and dependable Blades in crucial supporting roles, without reaching the heights of character drama or biographical insight.

The film opens wide in theaters throughout the U.S. on Friday, August 26.