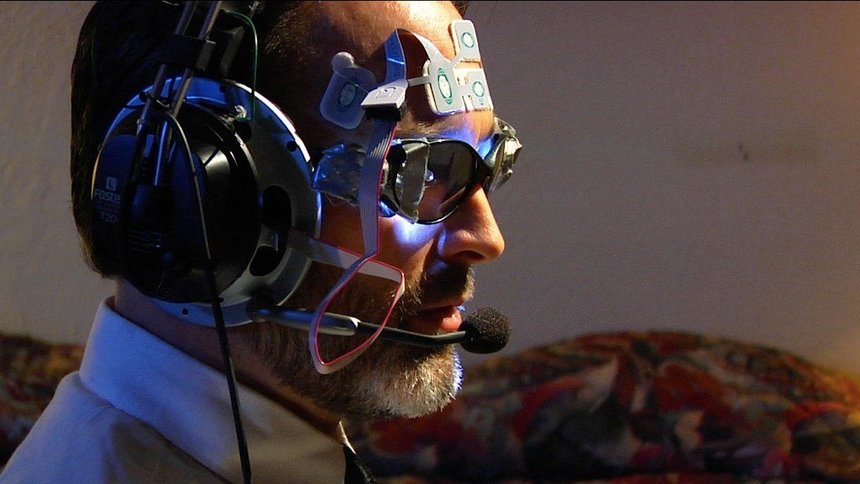 Einstein's God Model is a small movie made of big ideas with an unfortunate title. Its preoccupation with science is its driving force, played out as an old school science fiction yarn, about men tampering in God's domain.

Life beyond death, string theory, relativity, and plenty of other brain-bending concepts and ideas are bandied around and dabbled with. It dares to show rather than tell at every opportunity. It might be doing so with off-the-shelf digital effects software packages, per the DIY vibe and flavor of the film, but this basic tenant of moviemaking is nonetheless entirely present.

At times, Einstein's God Model feels more like a light show accenting a science lecture rather than a movie. But, it is a movie... There's a cinematic flair that, while not always professional, is mostly... interesting. It has relatable characters, played by decent actors, and it isn't afraid to explore the wants, desires, losses, and inner turmoils and questions of said characters. Even as it does so with laptop-rendered trickery and a lot of five dollar words.

Before we go any further, let's make one thing clear: Despite the film's claims about true-life science based on a late-in-life device pioneered by Thomas Edison, I'm not doing any research in my effort to review this movie. It's not because I'm lazy, or in a time crunch. (Although the time crunch is real!) It's because, like any film, Einstein's God Model must stand or fall on its own. Whatever the message that writer/director Philip T. Johnson is intent on putting forth, it's gotta work apart from its basis, its springboard, its inspiration.

Admittedly, I am curious if Thomas Edison had actually undertaken a device to contact the wandering souls of the dead from beyond the grave. (Of the hundreds of inventions Edison was involved with, one presumes most of them were, ahem, dead ends.) Whether it's true or not, it is a great idea for a movie. In this one, the experiment and its parts have been passed down for generations, from one big-brain scientist to the next, each one improving on Edison's work, but not allowed to alter it. (Although at some point a very recent bike helmet became a key component.) 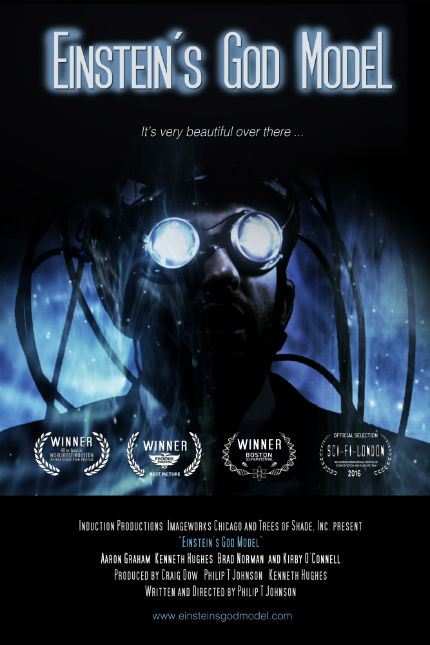 The film opens with an earlier attempt by an ambitious scientist (Darryl Warren) and his partner (an ominously pen-clicking Kenneth Hughes) to exploit the guilt and loss of a guy named Craig (Brad Norman). Craig only wants to make contact with his dearly departed sister, whom he feels responsible for losing.

He is strapped into a chair, and made to wear odd goggles and a wired helmet. Before him, there is an antique phone. He may only answer it when instructed. This is how he will reach his sister.

The two guys in the lab coats behind the glass, however, have a bigger agenda. If only they hadn't insisted on running the machine, with all its unstable electrical blasts and room shaking quake, for those last six seconds. Then, perhaps Craig would still have his eyes.

Cut to a digitally baked opening credits sequence like none other. No filmmakers, no actors, barely even production companies. Essentially a bunch of famous scientists listed in faus clever terms: “Relativity Chairman – A. Einstein.” “Stratogrphic EMF Receiver Constructed by T. Edison.” (As though film credits routinely abbreviate first names?) It's a questionable, larkish move that leads one to wonder about the validity of this film. But, from the start, filmmaker Johnson makes it clear that hard science (hard as nails, that is!) is supposed to be the true star of this particular show.

And that is a primary reason why something like Netflix's similarly street-level supernatural Stranger Things, will surpass a film like this any day of the week. Mind you, I'm only halfway through Stranger Things, but already I can probably safely say that if it were a 100 minute movie rather than an eight episode TV series, and not nostalgically pandering with its early 1980s dressing, it would go drastically less noticed. Yes, people gravitate to television over film these days, and they really like having it served to them front and center by a subscription service they're already paying for. But more to the point, Einstein's God Model likes to ask mysterious Big Questions; to its detriment, it more enjoys serving up answers.

That's not the deal breaker, though. Nor is it the glaringly low budget, nor the camera's frequent inability to hold focus like it ought to. The deal breaker, if there is one, is right there in plain sight: In and around the many hyper-rendered CGI effects and accomplished montage constructs are several instances of filmmaking 101 fails. Two characters talking to one another, shot with the eye-lines completely wrong. Also, I lost track of how many times this movie cuts away to reaction shots of a dog.

But, let's go back to those montage constructs. Keen blasts of sharply assembled insert shots and sound are standout aesthetic qualities of the movie. (Johnson also edited the film.) His assumed flair for the visually unconventional might be inexperience, it might be go-for-broke gusto, or it might be sheer Eisenstein-ian inspiration. It does, however, fly in the face of the mis-managed conversational two-shots, making one wonder.

The main character, played by Aaron Graham, is, like Craig earlier in the film, also trying to resolve guilt over a dead female (Kirby O'Connell, getting the job done). After his fiancee Abbey goes out in a misdirecting manner worthy of De Palma's Dressed to Kill, he too gets involved in the rush, the obsession, the madness of getting Edison's machine to work. In the end, Einstein's God Model isn't so different from the scientifically cautionary attitude of most such films.

There's a darkness to Einstein's God Model. The film isn't afraid to let all of it's male characters go unlikable in their valiant (if crazy) pursuit of science. This gives the undertaking a certain sharp edge that it needs in overcoming the mumbo-jumbo. Being that it's Edison's machine that is front and center, it is interesting that Albert Einstein is the one with his name in the title. Einstein's faith-driven “God model,” detailing how mankind is inching its way closer to the believed creator's secrets of the universe, is discussed. Will it be defied? That's the primary interest of this passion project of a movie.

Einstein's God Model may not be model cinema, but for those willing to wander through its overuse of eye-burning visuals and some amateurish road-bumps, it is an entirely watchable curiosity with a unique drive, decent performances, and a strangely glowing soul.

Einstein's God Model will open at Arena Cinema Hollywood on Friday, August 19. It be then be available on Amazon and Google Play on August 30, and on iTunes, Vudu and XBox on October 18. Visit the official site for more information.

Do you feel this content is inappropriate or infringes upon your rights? Click here to report it, or see our DMCA policy.
Einstein's God ModelPhilip T. Johnsonscience