Crowdfund This: GUAP, A Delicious, In The Heights Gentrification Comedy 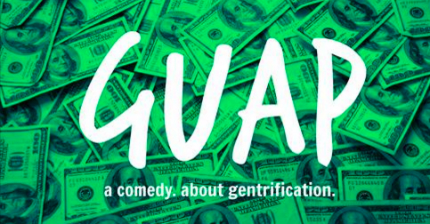 Full Disclosure: I know Chris Myers but I don't KNOW Chris Myers. A few months back we met sitting across from each other at a play by Jackie Sibblies Drury, a difficult but phenomal playwright who had made a piece for an audience of under 50. We sat rapt, both moving and responding like people who watch things with their full bodies.

After the play I looked at him and he looked at me and we knew we were kindred spirits. When he left, my friend turned to me and was like, "You do know he's about to be the biggest deal right?"

Not knowing this beforehand, I began following his work, seeing that he was the lead in two plays by the seminal young playwright Branden Jacobs-Jenkins and that he is an active and vocal member of the theatre community. One day his outcries for more gender parity and racial equity in the theatre slowed a bit and he began prepping everyone for a new project: a Kickstarter for a new webseries.

It speaks to the moment we currently are in that an early career Off-Broadway actor could raise over 20k and get countless co-signs from major publications in less than a month for a film project called Guap he is writing, directing, and not starring in. Usually the story goes: out of his luck/enterprising young actor can’t find the work that matches his voice…so he makes it himself and now he is the star!

You’ve seen that with High Maintenance, The Outs, even Broad City, but this is abnormal. This is an actor fully shedding that mask to wear two new ones and people are clamoring, not because of his in-laid star power or his social media reach but because of the moment we are currently in.

Chris Myers’ Guap is telling a timely story, a love story, an old story, a new story, a comedy about gentrification in Washington Heights. As anyone who has watched the area over the last ten, fifteen years, you’ve seen the way the neighborhood has shifted, welcoming in more and more young white hipsters and displacing many of the latinx families that populated the streets and apartments before. This is the story of every major urban center in the United States, this is a story that haunts every country with unchecked capitalism and that is why it speaks so clearly to the moment we are in.

Guap, now being crowd-funded as a web-series, is a multi-generational, bi-lingual comedy that follows Pedro, an unsuccessful drug dealer who is forced to use his hidden culinary talents to unite his family against the gentrification threatening their humble Washington Heights neighborhood. He has to make a decision about what matters most to him in order to galvanize his community.

The story itself is already rich, yet having seen the projects that Chris Myers, a recent Juilliard graduate who has made one other short, has made himself available for Off-Broadway while turning down offers for pieces with more “prestige” makes me feel even more sure that what he will render on screen will be the type of web series that gets people talking, that moves to new places and has a major impact.

As of right now they are just reaching their goal. Yet, as all of us who make films know there is no such thing as too much money. The filmmakers at the heart of this piece are looking to make the best possible product for a community of web viewers who are consistently underserved. Let’s make it possible for a few young Dominican kids to have a frame of reference for their identity outside of Lin-Manuel Miranda and In The Heights. Let’s see if we can make the next great web series that speaks to the moment we are in right now!

Check out the Kickstarter link.

Do you feel this content is inappropriate or infringes upon your rights? Click here to report it, or see our DMCA policy.
Chris MyersGuapPatrick LetteriiCharlie RayDavid RysdahlStephanie HsuSocorro Santiago