The Bangkok International Film Festival, which had attracted stars including Catherine Deneuve, Jeremy Irons, Michael Douglas and Oliver Stone, enjoyed its final year in 2009, before quietly disappearing and never being spoken about again in polite Thai circles, leaving behind only an abandoned website and various million-dollar corruption allegations.

As a historical note, the BKIFF had evolved from a smaller festival, organised by the Nation newspaper, forcing the Nation festival organisers to change their festival name to the World Film Festival, Bangkok. That festival still exists, but seems unwilling to take on the full power of government funding which would enable it to attract the stars, but might also sacrifice its political freedom.

So, instead we have the Thailand International Film Destination Festival, run by the Thailand Film Office, which operates under the Department of Tourism. The single mission of the TIFDF is to show the prowess of Thailand in the production of international movies. Thus, it has always been a strange festival in which Thai films cannot be screened.

The TIFDF is now in its fourth year, and always brings an eclectic selection of films, in which one is guaranteed to spot a good share of tuk-tuks and exotic Thai scenery. This year's festival will, unfortunately,  be remembered more for the films that were not screened than those that made the final program. Originally announcing fourteen films, only ten made the final schedule, as four films were withdrawn upon the orders of a higher power.

Whilst the removal of Twilight Over Burma – a story of a peaceful, democratic Burma, overthrown by an evil military government, resulting in human rights abuses, might be understandable, given Thailand's current political climate, the removal of others including Pattaya, a hit French comedy about, well... Pattaya, Detective Chinatown a Chinese comedy, and Happy Hour in Paradise a Swedish comedy, left both press and audiences scratching their heads.

If the point of the festival is to attract international films to Thailand, one might question whether banning films and cancelling the film-makers' air tickets is really the best approach.

Happy Hour in Paradise was screened off site at a local cinema club leaving viewers scratching their heads as to how this utterly non-controversial film could have invoked the ire of the censors.

In this amiable Swedish film, a female priest, Carro (Eva Rose) is sent to Phuket to reign in wayward priest, Krister Hellstrom (Kjell Bergqvist) and prepare his newly-built Swedish church for its official opening by the visiting Swedish PM. Needless to say, there is no church, as Hellstrom has squandered the money on earthly pleasures. It is light hearted fare played with gusto by a solid cast and kept moving along nicely by director Kjell Sundstrom. It was arguably one of the most purely enjoyable films in the festival – or rather not in the festival.

In Akan Satayev’s Hacker, Alex Danyliuk (Callan McAuliffe)   graduates from small time cyber crime into the big leagues of the dark web as he wages war against the  international banking system and the injustice he believe it perpetuates. The film is ambitious enough in its plot, it location, execution and features a solid performance by McAuliffe. The film is yet to find a US distributor, and is sadly an example of the sort of low-to-medium budget film which is perhaps neither spectacular enough to find mainstream distribution, nor creatively innovative enough to appeal to the indy festival circuit. One suspects that it will end up on cable television, where audiences will find it entertaining enough.

In Jamie M.Dagg's measured thriller River, John Lake  (Rossif Sutherland)  stops a rape in the middle-of-nowhere Laos and, in the resulting struggle, kills the rapist.  Director Dagg keeps the tone steady and tension tight as Lake makes one fretful and irrational decision after another in his attempt to weave his way through Laos, stay ahead of the pursuing police and reach the relative safety of the American embassy in Thailand. The film has had a good festival run, and generally positive reception. Mattie Do, an Lao-American producer, visited the festival, and one can only hope that River will help to put Laos on the film-making map and give a much-needed boost to local production.

Courage is not a quality  director Stephano Calvagne lacks.  In Un Nouvo Giorno, Calvagne plunges head first into the choppy seas of sexual identity and transgender politics. Based on a true story, we follow the journey from childhood of Giulio who self identifies as a girl. The film focuses, uncomfortably at times, on  Giulio's early childhood battle to have dreary suburban Italy see him as her. The bulk of the film settles on a Gulio as a young man (Luca Filippi) as he makes his way in high fashion Milan while struggling to reconcile his internal gender debate. Giulio finally takes  the plunge, and heads to Bangkok for a sex-change operation and a new face to boot. Post-operation, Guilia is played by a different actor, transsexual actress Sveva Cardinale. One can perhaps understand why Calvagna wanted to use a 'real' transsexual actress rather than put Luca Filippi in a dress, but Cardinale looks absolutely nothing like the previous Giulias, and seems a few inches taller as well. The result is jarring in the extreme. At the Q&A, Calvagna said that he indeed wanted this moment to be shocking. However, it leaves the audience with the uncomfortable feeling that perhaps the operation was a rather bad idea, particularly as Giulia subsequently attempts suicide. Perhaps the best that one can say is that it certainly was the source of much debate after the screening as to what we were meant to feel about it all by the end.

Jiong He’s teen flick Forever Young is a slick, if relatively unchallenging film centred on a group of attractive Chinese young men who decide to perform the Dance of the Swans from Swan Lake, complete with tutus, as a tribute to their deceased classmates. Apparently, graduation ceremonies in China are traditionally held in the spring, and the film was shot in the winter, so Thailand provided the university setting. Never has such a group of perfectly-formed teenagers graced the screen outside Korean cinema. Everything is beautiful, and everyone is good-natured, and apparently this earned it over $40m at the Chinese box office. It proved to be a big hit with the Thai festival audience, and one wonders whether the K-pop scene might have a new Chinese rival for the affections of teenagers across Asia.

The two films from India could not have been more different. Sibbar Kahn' s Baaghi follows the Bollywood template with the predictable kidnappings, slapstick characters, zany sound effects, dubious acting, ever-changing tone and, of course, sensational dance routines. Like the cool Audi sedans his characters drive, Sabel Singh Shekhawat's Fireflies rejects the  scatterbrained adolescence of Baaghi in favour of a much more adult exploration  of  affairs, deceit and emotional complexity in contemporary India. Estranged brothers, Shiv (Rahul Khanna) and Rana Rathore (Arjun Mathur), struggle in life, in love and with their own troubled past. The excellent ensemble cast allows Shekhawat the courage and freedom to study his characters intimately. While the narrative doesn't quite hold together - the VO in the film comes from a sister who we later learn died in their adolescence – Shekhawat' s characters find an ultimate catharsis from a life stuck in a formless, gripping grief. Apparently the film was not a commercial success, but it is certainly a brave and mostly successful attempt to create a real, modern, and very Indian drama.

In the retrospective section was John H. Lee's 2010  Sayonara Itsuka. In 1970s Thailand, ambitious  Yutaka (Hidetoshi Nishijima)  leaves his dutiful fiancé Mitsuko (Yuriko ishida)  in Tokyo as he heads to Bangkok,  seeking a quick climb up the corporate ladder by  building  his airline company  into a regional powerhouse. Instead he runs smack into wealthy, free spirit Toko Manaka (Miho Nakayama). His obsession with career and fiancé are quickly replaced by a tempestuous   'amour fou'. With stunning production design, intimate  camerawork  and performances  that tight-rope walk between repression and wild abandonment, director Lee creates a sensitive, sensual portrait of three people (turns out fiancé Mitsuko is no doormat) caught in an irreconcilable conflict between  love and duty.

Also In the retro section of the film was a hugely welcome screening of Frederic Lepage's 2008 gem, Sunny and the Elephant. Lepage pitches the film solidly into family fare but the ambition, vision and scale of the film, following a group displaced Karen tribesmen and their Elephants, is breath-taking.  Lepage gifts us a view into a rapidly disappearing world, capturing it in all its complexity and splendour.

TIFDF would not be complete without the inclusion of a couple of Thai-based  B movie action flicks. One wonders whether the label of 'theatrical premiere' is perhaps a result of their release elsewhere only on DVD. This years offering was the baffling The Asian Connection featuring a sclerotic Steven Segal as a bad ass Cambodian gang boss crossed by a hapless American bank robber John Edward Lee. The director Daniel Zirilli confirmed that it was made on an extremely low-budget, and one should perhaps praise TIFDF for giving films like this a chance to show on the big screen, when usually they would only be seen on small screens in... I'm not sure where. The film was brightened by the appearance of the stunning newcomer Pim Bubear, but sadly, while the energy and achievement was all laudable, the film was let down not by its technical or budgetary limitations but by a script that lacked originality, credible dialogue and anything remotely resembling real drama.

A slight upgrade on this genre comes in the form of Man With the Iron Fists 2. Thaddeus (RZA) takes his own sweet time washing up in a 19th century Chinese town where the locals are under the boot of evil despot Master Ho (Carl Ng). When his all important 'chi' is suitably topped up, Thaddeus utters a few platitudes then joins forces with downtrodden miner Li Kung (Dustin Nguyen). The iron fists soon begin to fly.  A look at Roel Reine's credit list shows so many '2's and '3's that it appears more like a football score than a filmography. He is clearly an efficient film-maker whom studios such as Universal trust to bring their films in on budget and schedule, but one wonders whether he will be able to break out into more adventurous and less formulaic territory.

Ultimately, the martial arts skills of Man with the Iron Fists 2, the extraordinary scenery of Sunny and the Elephant, the Thai sense of fun in Happy Hour in Paradise, and even the low-budget energy of The Asian Connection succeed in presenting an impression that Thailand is indeed a jolly good place to make films, perhaps marred only by the bureaucracy of the local political system. How strange that whilst the whole event was presumbably intended to sing the praises of the Thailand Film Office, ultimately it succeeded in spite of, rather than because of their organisation.

The festival once again featured the Amazing Thailand Film Challenge where students from around the world  and who are in post secondary Media courses are given flights to Thailand, a thousand dollars, a Thai PA and seven days to make a film. Prizes of $10,000 dollars are awarded to the winners. As this festival tends to jump around the calendar (last years competition and festival was in February) anyone hoping to get into next year’s competition should watch the  ATFC site on Facebook. It is truly an amazing opportunity. 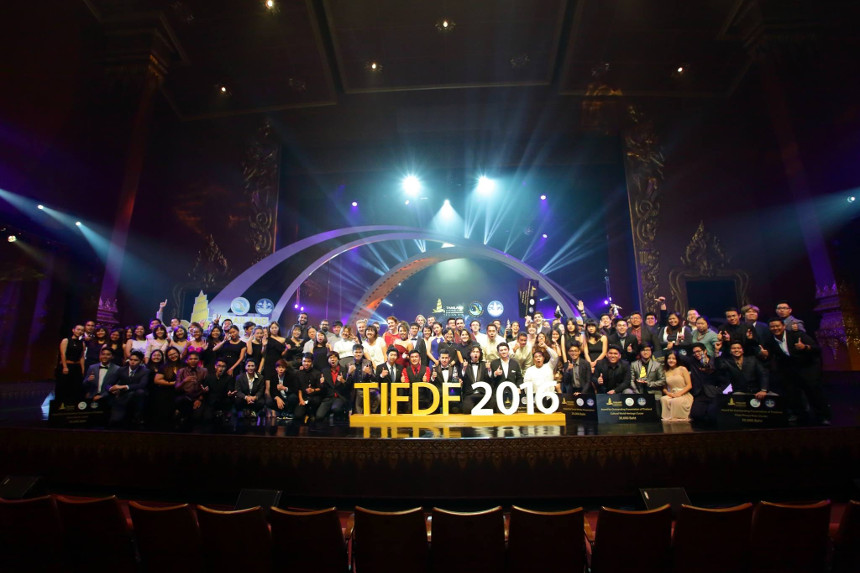