Review: LIGHTS OUT, When Darkness Rules 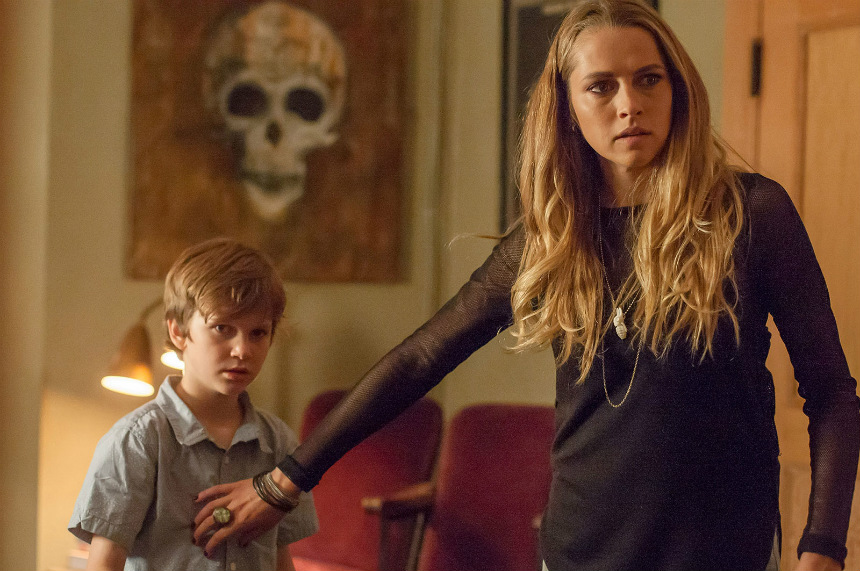 Modesty is an underappreciated virtue, especially in horror movies.

Lights Out revolves around a frightening idea: turn out the lights and something sinister appears. Turn on the lights and the something disappears. A few years ago, filmmaker David F. Sandberg captured the idea perfectly in a short film, which ran less than three minutes. But how to expand that nugget into a feature film?

The opening sequence of the feature version establishes the premise splendidly, as a factory manager named Paul (Billy Burke) must confront the disturbing phenomenon. Flash forward in time and Rebecca (Teresa Palmer) is introduced. She's in a relationship with Bret (Alexander DiPersia) but steadfastly reluctant to commit to anything more than a casual affair.

Rebecca, to be frank, looks like she's hiding something. She's outwardly pleasant, but there's more than a suggestion that she's haunted in some way, suffering from something more than a lack of sleep. Indeed, as her deep-seated troubles are revealed, it becomes apparent why she has trouble trusting Bret sufficiently to allow him to stay overnight at her apartment.

And she's definitely not the one with the big troubles in the movie. Her mother, Sophie (Maria Bello), is shown to have traumatic emotional exhaustion from things she has experienced in the past, and is still suffering at present. She's really in no condition to be caring for her young son Martin (Gabriel Bateman), who somehow is holding onto a kind, reasonable, if childish view of what's happening.

For much of its running time, Lights Out is more of a drama than a thriller or a horror movie. In the screenplay by Eric Heisserer (Final Destination 5, The Thing), the overlapping personality traits of Rebecca and Sophie slowly become apparent, as well as the things that distinguish them as individuals. It's a movie with empathy for its characters; as a result, we're more likely to root for them, even when they're doing things that are dumb or illogical.

Palmer and DiPersia underplay their emotions, and Bateman gives a very winning performance as the child in peril. In contrast, Bello overplays her hysterics a touch, but that feels right, too, in part because the actual villain doesn't have much to say.

Good, clever fun that doesn't overstay its welcome, Lights Out exemplifies what a modest horror movie should be. It introduces a few characters, fleshes them out as much as needed, and then creates a series of unsettling scenes that are enjoyable to watch.

The film opens in theaters throughout North America and other parts of the world on Friday, July 22.

Do you feel this content is inappropriate or infringes upon your rights? Click here to report it, or see our DMCA policy.
Alexander DiPersiaDavid F SandbergGabriel BatemanMaria BelloTeresa Palmer