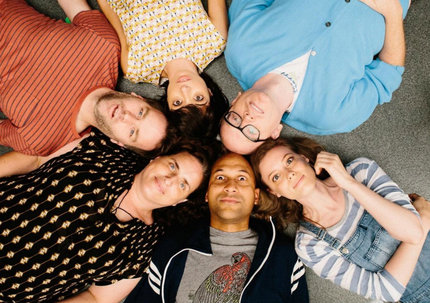 As an ambitious writer, I know the struggles of trying to live my dream -- laboring tirelessly at my art for a small audience, working depressing side jobs to make ends meet, living with friends and family because I don't have enough for rent, and watching colleagues I helped get started zoom past me at lightning speed. Don't Think Twice is a beautiful portrait of these struggles and finding solace in it. I love this film.

Mike Birbiglia writes, directs, and leads as Miles in Don't Think Twice, about an improv comedy troupe called The Commune. In his gang are some of the best comedians working today: Keegan-Michael Key as Jack, Chris Gethard as Bill, Gillian Jacobs as Samantha, Garfunkel and Oates’ Kat Micucci as Allison, and Tami Sagher as Lindsay.

All six key players work whatever job they can get to keep the money flowing, but what keeps their spirit alive is their weekly improv show at Improv of America. Their comedy troupe is one of the most crafty there, which gives each member colossal dreams of making it on “Weekend Live,” which is an obvious caricature of Saturday Night Live. (The hard-as-nails, mean-as-hell owner of the show pops in a few times, and he's no doubt supposed to resemble SNL's Lorne Michaels, but I’m sure this was in good fun.)

Well, good things always come to an end, and when one of the members of the group gets cast on “Weekend Live,” tension and fear set in with the rest of the troupe.

Everyone pulls their comedic weight -- as well as some poignant moments -- to the movie, but the real standout of the film is Chris Gethard. Gethard has a spoken very publicly about his depression and has even mocked it on his own show, and here you can see the sadness in his soul when he's hard at work to make people laugh for just a few minutes. (Side note: Gethard's biggest fear is death of a family member and in the film, he has to lay someone close to him to rest. I imagine that couldn't have been easy, even it was just make believe.) There’s a moment in the film when he’s given up hope that he’s going to make and speaks a line that cut right through my soul: “I feel like your twenties are all about hope, and your thirties are all about realizing how dumb it was to hope.” A feeling many know too well.

As the filmmaker, Birbiglia is just as natural and hilarious in front of the camera as he his behind it. Don't Think Twice is his second time in the writer-director's chair, and he's two for two. He nails his vision of the struggle and pain of turning improv into a full-time career flawlessly. His first feature, Sleepwalk with Me, was one of the best films of 2012, and now, Don't Think Twice is one of the best of 2016. What's prolific about this film is you don't need to love or care for improv to understand the film’s underlying message. This movie isn't about just about improv; it's about working hard at your art and finding peace in the struggle, and the harsh reality that you might not make it and that's OK.

Don't Think Twice isn't just a comedy -- Birbiglia directs all comedians to show their humanistic, vulnerable side -- it's about the fear of pursuing your dreams and facing the risk of failing. This is a bold move. This is what makes Don't Think Twice one of the best films of the year.

The film opens in select theaters in the U.S. on Friday, July 22.