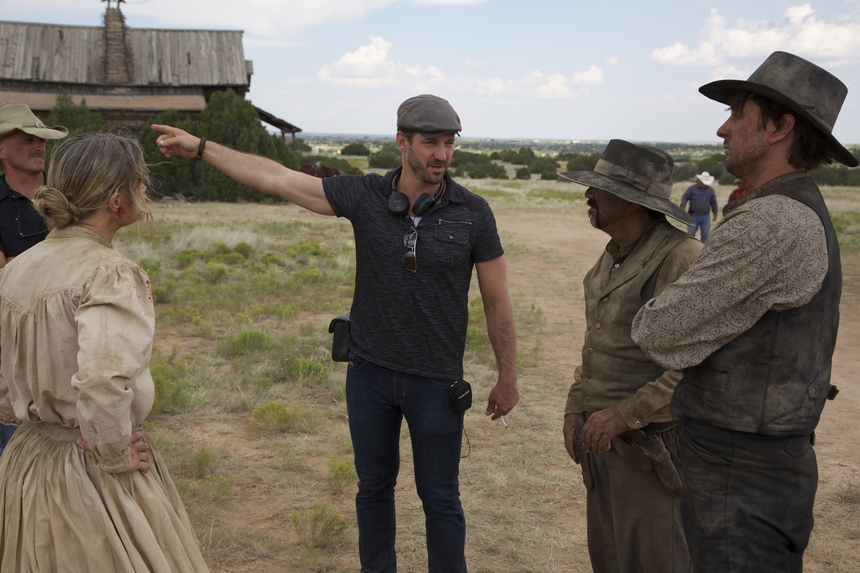 JT Mollner's feature debut Outlaws and Angels is a subversive and emotionally honest coming of age story with a strong female lead at its centre. Joining the recent batch of westerns made by indie auteurs who seem drawn to playing against genre tropes, the film defies any notion a viewer may have of good versus evil on the American frontier, aiming instead for a provacative moral ambiguity.

Shot on Kodak stock and inspired by 70s European cinema, the film brims with old-school techniques that will excite fans of spaghetti westerns. All in, I think it's a bold debut from Mollner, who emerges with an original voice and a unique style.

Outlaws and Angels sees a limited release on July 15 and will screen tonight at the 2016 Fantasia Film Festival in Montreal.

ScreenAnarchy: What is it about the western that compels you and why did this story need to be told in that genre?

JT Mollner: My grandfather turned me on to westerns at a young age and I pretty much saw all of them. I was always fascinated by the American western, but I was also fascinated by the avant garde, European cinema of the 60s and 70s. I like pushing the envelope with honest uncomfortable scenes and I always thought the American western was fascinating, but a little too clean on many levels.

A lot of the westerns  I saw over the years were very clear depictions of good vs. evil, but also they were literally, physically, too clean. Teeth were white when there wasn't fluoride back then and costumes looked like they were straight out of a rental house. So I thought that this home invasion story, which was influenced by early Polanski films and European films, would be fascinating to tell in the old west.

I did some research and discovered there were some really insidious things happening in the remote corners of the frontier, out in these homes where these families existed by themselves and got a degree of cabin fever and I was interested to expose those kind of harsh truths about the old west in a film. Because I've never seen these envelopes pushed in a western before, it felt like new ground.

Outlaws and Angels definitely does a good job subverting expectations in terms of standard western character types and what they represent and I like how the title reflects that, too.

In terms of the style of the film, you're doing stuff like rack zooming --- techniques you don't see used anymore --- stuff that is more of a seventies thing, more of a European thing. Is that just something you're interested in or is there a thematic reason behind those decisions?

JTM: I've seen a lot of newer westerns in the last decade or so that were shot on video and we decided to shoot on 35mm Kodak film. I just missed the photographed look of the earlier westerns because I just feel like it having it makes it more immersive. So that was our goal and we did a lot of testing, a lot of overexposure, made it a little more grainy.

But as far as the zooming goes, the rack, I really fell in love with this vintage zoom lens that we got. It really gave us a lot of texture. It was a lens that was built in 1960 and it really helped us get the look we wanted through the glass. But also, you may have noticed that I really like long takes. I don't like general coverage. There's a lot s scenes where I like to sit there and move with the actors and let the action play out and, for me, the zoom becomes a utilitarian piece. I can use the zoom to get into close-ups within those long takes and it just became part of my style for the film. It's a zoom heavy movie, but I think it helps with the retro feel we were going for. I understand if people might get annoyed, but every zoom happens for a reason.

This is a feature based a short you made almost ten years ago called Henry John and Little Bug. A lot of filmmakers create shorts and put them online in order to drum up interest for a feature. Based on the process you went through from short to getting this movie made, what are the realities that filmmakers are facing and is this the right approach to take?

JTM: In my experience, doing the short film didn't help me make the feature. We actually made another short seven years after called Flowers in December and I was just a better director by the time we made that film so I feel like it was that film that really helped us get actors interested. In the end, that first film helped people understand what we were planning to do as far as costumes and make-up go, but it wasn't the movie we took out and showed people to get financing for this.

I used it more to inspire me to write this feature script. But I didn't use it to get the feature financed.

You have a very interesting cast. You've got Ben Browder playing very much out of type, almost unrecognizable. Francesca Eastwood and Luke Wilson and Chad Michael Murray all doing great work. Just based on the subject matter, was it challenging getting these actors on board, or were they game?

JTM: The final cast you see in the movie were totally game and one hundred per cent on board and just incredible to work with, but it wasn't easy. It was very difficult because I was an unknown filmmaker with a very provocative script. And I don't even blame them. A lot of actors read it and liked it but they were nervous about what I was going to do with it and how I was going to shoot it.  And there are a lot of low budget filmmakers out there shooting on the equivalent of an iPhone and sometimes they turn out okay, but  one in a while they look really low brow. So I think people were nervous.

We spent about a year getting our first attachment. we had to get the right person and they had to be enthusiastic. We had a lot of meetings and nothing was working out. And then we got a call from Chad Michael Murray's agent who said he was looking to play something against type. And I'll tell you, we didn't think he was right. He was about 15 years too young and definitely prettier than we had imagined for the role, but when I met with Chad it only took me about fifteen minutes to know he was the guy. And I'll never write another movie without keeping him in mind because he's the hardest working actor I've probably ever worked with.

Same with Francesca. She came on next and we build the cast around them.

Were you worried that it would be hard for an audience to go along with Florence's story, because of the turn the story takes they would reject it? Did that concern you as a writer? or were you just committed to telling the story?

JTM: I a have big problem with predictability in films these days and I see people painting by numbers with their movies and it's because there are a lot of films out there and a lot of producers and studios are scared of taking risks on fresh subject matter.

When I wrote this film, I wrote a film that I would want to watch. I wrote film that went to places nobody could guess and nobody could expect. And we're trying to say multiple things about violence, about humanity, about ambiguity when it comes to ethics and morality. There's a lot of things we're trying to say in this film. Nothing is meant to be gratuitous, but honest. I was always very confident with the story and where it was going and I knew I would follow it if I went to theatre, so I had faith there were others who are also looking for something more unpredictable.

Do you feel this content is inappropriate or infringes upon your rights? Click here to report it, or see our DMCA policy.
Chad Michael MurrayFantasia 2016JT MollnerOutlaws and AngelsTeri PoloLuke WilsonFrancesca EastwoodDramaThrillerWestern