Frontières@Fantasia 2016: Works In Progress - THE CHAMBER, THE DEVIL ON WHEELS, INNER GHOSTS, RADIUS And THE VOID

The Works in Progress session is a strange beast. Think of it like Goldilocks and the Three Bears. Like the porridge was too hot, too cold and just right, so is the kind of snippets of projects that you get to see: I Think I’ve Seen All That I Ever Need To See (Too Hot/Much), Sonuvabitch You Damn Tease (Too Cold/Not Enough), and Sigh, I Guess That Will Have To Suffice For Now (Just Right/Enough To Get Me By).

Friday morning we had an opportunity to see footage from five projects: The Chamber, The Devil on Wheels, Inner Ghosts, and two Canadian productions and Frontières alumnus Radius and The Void. What follows is just a collection of reactions to the footage that was presented to us. Work still has to be done on most of the projects but they are coming along nicely.

The Chamber - Writer/Director Ben Parker and his producer Jen Hardof some clips with us taken out of the first act that morning. The story is about a Special Ops unit that commandeers a research vessel and its submersible of the coast of the Yellow Sea, near North Korea. With growing uncertainty about what is happening on the ocean surface when the submersible reaches the target tension between the soldiers and the pilot of the vessel, played by Force Majeure’s Johannes Bah Kuhnke, reaches an all time high and the vessel will be crippled and begin taking on water.

The duo then took us through the production stages and sets built for this claustrophobic thriller. Parker said that a lot of the FX are practical. We got a look at the submarine set, an impressive set up with take away panels allowing Parker to get the angles he needed.

The overall feel from the selected clips we saw were tense and anchored by the performances from Kuhnke and their lead actress Charlotte Salt, who plays the total bad-ass special ops soldier in charge of the operation. Hardof praised Salt’s work on the production and called her role a ‘three dimensional female lead’.

The film has been sold to Studio Canal in the UK and is looking for international sales representation. 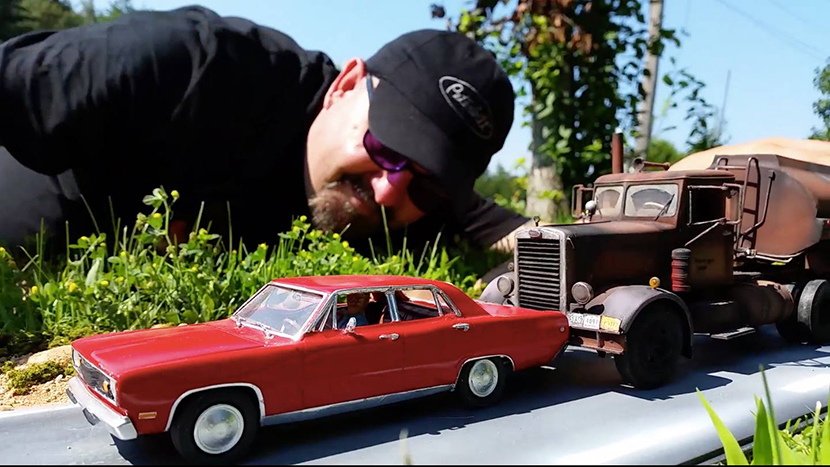 Devil on Wheels - The documentary about the fandom about Stephen Spielberg's first film, Duel, is coming along nicely. We were shown roughly twenty minutes from the finished film. It was a mix of academics who have written about the film, to producers and musicians who worked on the film, to three owners of the last surviving Duel Truck. There is still some filming and postproduction left to do. The filmmakers were at the Market to update us on the production and seek out further financing to complete the production.

What struck me as we were watching the footage is honestly how entertaining it was. Not just from the every man, the average Joe whose grassroots personality lends themselves to laughs, but even some of those involved with the original production. The composer Billy Goldenberg who shows us how he got some of the music and bassist Carol Kaye sharing how funny she thought it was that the production did not want to completely tap into her skill set but got her to use simple grooves to accompany the gear changes of the truck.

There still is no word is Spielberg himself will appear in the documentary.

Inner Ghosts - This Portuguese Brazilian horror flick is currently in post production and looking for sales agents. We were given a look at an abridged cut of the entire film. LIke a thirty minute trailer which leaves you feeling that you do not have to see the movie now.

The story of the film centers around Dr. Helen Stevens who can act as a medium with ghosts, though she thought she had left that part of her life behind. However, she is brought back into that world and she helps Elsa, a young artist who is being haunted by a demon. During the sessions Helen is given plans for a device that may help her with her own research into treating Alzheimer's.

It was a bit challenging to appreciate what was going on up on the screen because the writer/producer Paulo Leite decided to talk for the film instead of letting it speak to us. It was challenging to get a sense if the scares will work. I will say this though, holy shit, there is an act of violence in the final act that is going to shock the hell out anyone that sees this film when it is done. I do not believe that anyone attending the session that morning was prepared for it. Not only is it surprising but it just hangs there in the frame for so long, dripping.

Radius - The first of the Canadian productions and an alumnus of the Frontieres Market Radius just wrapped up shooting three weeks ago and editing began last week so there was not a whole lot that was ready for sharing. But by golly what we did see is worth talking about.

We were treated to a short trailer and featurette cut in time for this session. The gist of the story is that one of the central characters Liam wakes up from a car crash with no memory of who he is. As he makes his way back to town all he finds are dead people and those he gets close enough to drop dead in front of him. He first suspects that there is a deadly virus out there but soon discovers that anyone who comes within a 50 foot radius of himself dies.

There is a crossover with this project and the crew of Turbo Kid. Post production will begin next month. It is difficult to gauge or comment what we saw as it was a scant few minutes of edited footage. Man, does the concept sound cool though. There is a line in the market guide, “When it’s all said and done, we wanted RADIUS to play out like a modernized, feature-length version of the best Twilight Zone episode you’ve ever seen”.

The Void - If this other Canadian production and Frontieres alumnus is not on your radar, where have you been? We are getting ever closer to the World Premiere in... ? Ha, though I’d tell you that? The film begins its festival run later this year.

The film’s producer Casey Walker gave a brief introduction to the project and we saw the trailer that was cut for the Cannes Market. That was it. That was all we got. I could have screamed and led a torch bearing revolt of some sort. But I understand that the team behind the production is super protective of their little film and want to ensure that everyone’s experience with the film is as unadulterated as possible. The less you know going into this film the better? I sure hope so.

I personally am in danger of letting expectations shape my experience with this film. I am no further ahead in coverage of The Void than when I first entered the de Seve that morning.