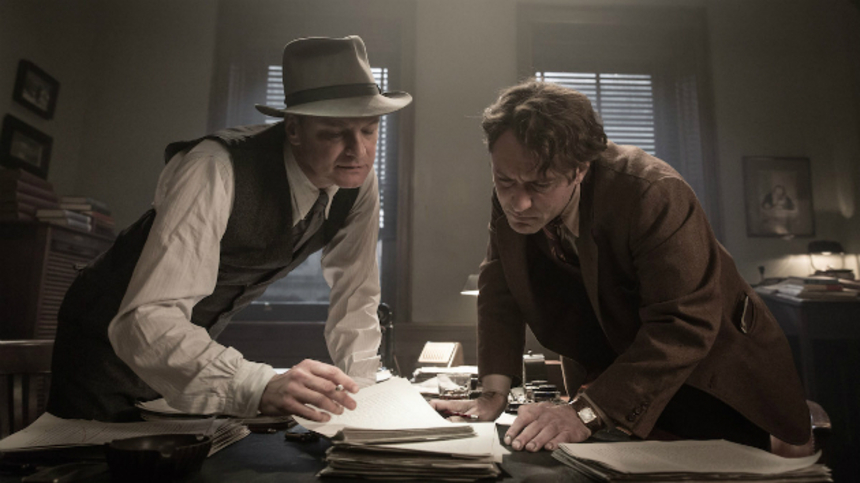 Elvis Costello famously quipped, "writing about music is like dancing about architecture", and while I hardly agree with the overall sentiment -- if I did, I wouldn't exactly be doing this -- his point is well taken. Success in one artistic pursuit in no way guarantees success in any other.

Accordingly, the criteria we use to adjudicate what constitutes a 'success' must by its very nature change depending on the medium. It's not rocket-science, and thankfully so. Because we're going to need to keep it mind while picking through the pieces and make sense of the mess that is Genius.
The film is a well-intentioned mess, made by artists of the highest caliber, telling of the creative partnership between novelist Thomas Wolfe and his editor Max Perkins. Though his star has considerably dimmed in the intervening years, Wolfe was one of the leading novelists of his day. A fast-talking, hard-drinking good-ole-boy from North Carolina, Thomas Wolfe took the literary world by storm with his two massive novels, Look Homeward, Angel and Of Time and the River before shuffling off the mortal coil at the tender age of 37.
And yet, his success was not preordained. Rejected by every other publisher in town, Wolfe owed his reputation to the chance editor Perkins took on him, and on Perkins' super-human patience editing his 20,000 page tomes down to size. And those are the basic beats of the films, from Perkins' first encounter with the unpublished manuscript to the final goodbye between editor and author upon the latter's death.
As Perkins, Colin Firth is Colin Firth, this time with an American accent. He's in fine Firthy form, wound-up, proper and respectably bloodless. As Wolfe, Jude Law is... absolutely apeshit. He plays his wildman author as Joaquin Phoenix as latter day Pacino as a 1920's minstrel, bringing such ham to the role that he effectively renders the film off-limits to Muslims and Jews. Law mugs and gums and hee-haws, chewing on his southern drawl and spitting it out like Durham tobacco. He is unbearable to watch. 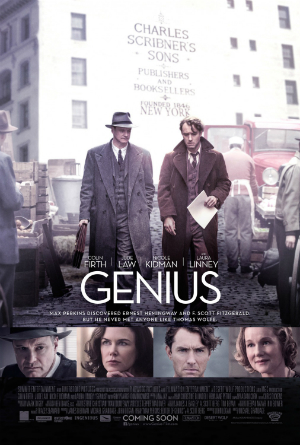 Rounding out the cast are Nicole Kidman as Wolfe's married-to-another-man lover/benefactor, and Laura Linney as Perkins' patient-but-neglected wife. If Law is given entirely too much, our poor actresses are given entirely not enough. Kidman is at least offered a couple of scenes to grandstand and bemoan her good-fer-nuthin' genius partner, while Linney rattles off about seven lines of dialogue in the entire film and then up and vanishes, presumably to go home and cash her check.
At least one of her seven exchanges helps illuminate what went so wrong here. Mentioning a play she's writing on the life of Napoleon's sister, Linney is told by a piggish Wolfe that theatrical historical pageantry holds no candle to the art of the novel. The exchange is intended to underline the author's brusque and disparaging manner, but it really puts words on what this film actually is: a theatrical pageant.
From the choice to cast exclusively non-American actors (save Linney) and have them assume accents to varying degrees of success, to the blocky way figures move through the frame and sit there plop at the center, to the odd emphasis on the clearly digital mattes in the background, the thing just feels stagey. And for good reason too. Genius marks the feature film debut of director Michael Grandage, who, when not making lifeless biopics, is one of the most respected theatre directors in the UK. Aha!
It somehow makes sense of Law's play-to-the-nosebleeds swagger, which may well play to every seat at a West End theatre, but overtakes and engulfs the more intimate confines of a close-up. It certainly accounts for the film's constant chorus of scenes where Law and Firth stand around, emphatically reading prose.
One can respect the director's impulse to step back and let the prose's power wash over the audience, while also recognize that such is a practice best performed on stage, where there is little other mediation between actor, text and audience. A film must take other elements into consideration, including pace and rhythm, and those are totally thrown off in those long and flabby sequences, if for no other reason than the fact the whole film is one big valentine to the benefit of unsparing editing.

Do you feel this content is inappropriate or infringes upon your rights? Click here to report it, or see our DMCA policy.
Colin FirthGuy PierceJude LawLaura LinnneyMax PerkinsNicole KidmanThomas Wolfe