Now On Blu-ray: Nico Mastorakis' THE ZERO BOYS And HIRED TO KILL

Last year Arrow Video graced the world with a Blu-ray release of the rightly notorious piece of '70's cult madness, Island of Death.

The director of that film, Greek impresario Nico Mastorakis, was little known by films fans outside of cult circles, but Arrow has partnered with Mastorakis to now release a pair of his later works, hillbilly survival slasher The Zero Boys and classic '80's low budget anctioner Hired to Kill. Though neither of these films is anywhere near as infamous as Island of Death, both have something to offer cult film fans, so we decided to take a look. 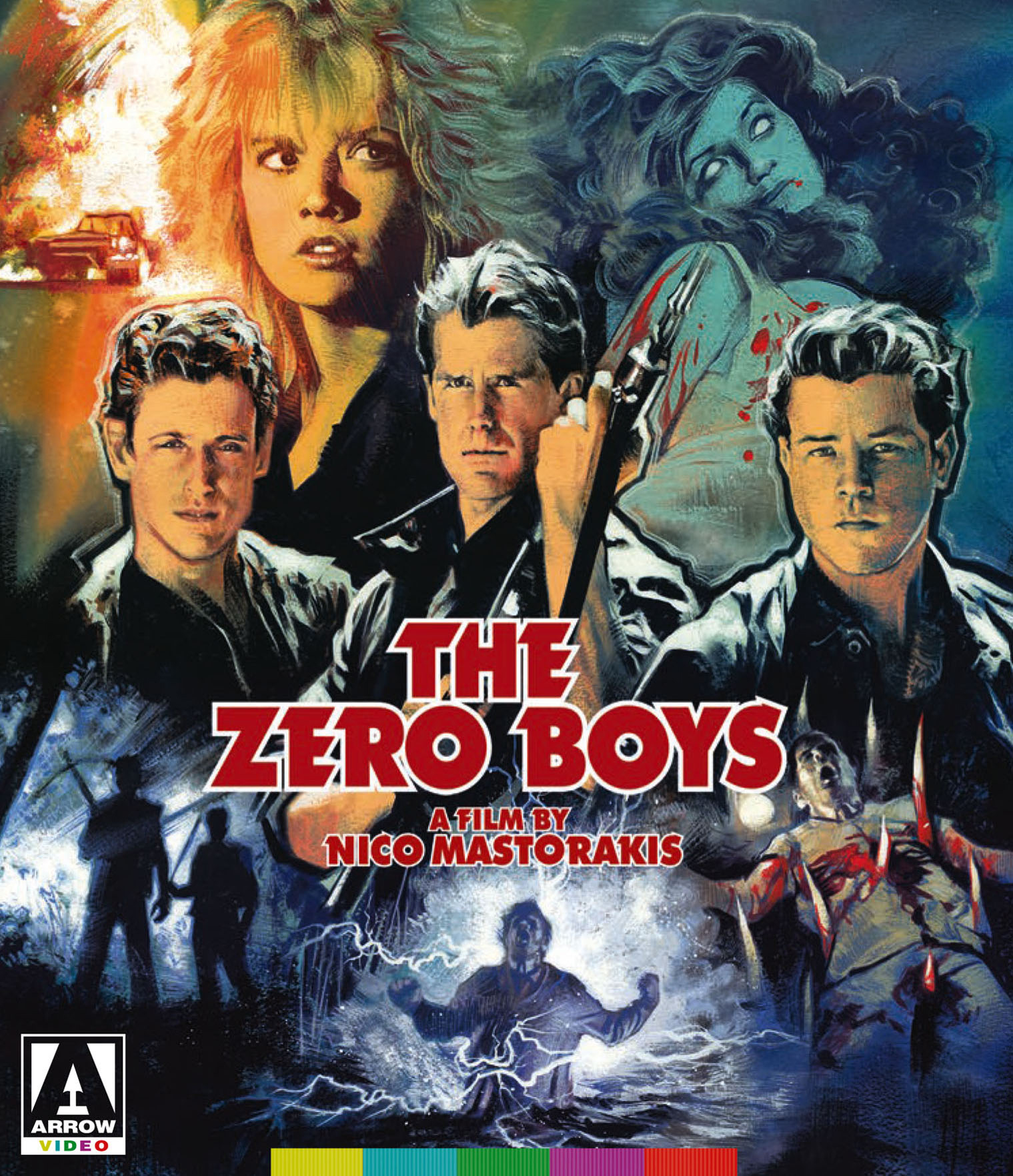 Normally, I don't like to let the Blu-ray cover provide a synopsis for me, but I'll make an exception in this case:

For a group of young friends, a weekend of survival games in the wilderness turns into a genuine battle of life and death when one of their number turns up dead. Finding themselves hunted by a bloodthirsty band of maniacs intent on slaughtering them one-by-one, the self-styled "Zero Boys" must now play their war games for real. Starring Kelli Maroney (Night of the Comet, Chopping Mall) and featuring an early score from the legendary Hans Zimmer (Inception, The Dark Knight Trilogy), The Zero Boys mixes action, survival and all-out slasher movie elements in a thrilling horror yarn that falls somewhere between Friday the 13th and Deliverance.

The Zero Boys is a strange movie. Part survival horror, part hillbilly panic, and part slasher, the film covers a lot of ground in its eighty-nine minute run time. Even though I was the perfect age to be corrupted by this movie when it released in 1986, I somehow completely missed it until Arrow Video sent me the release to review. Looking back, I don't know that my ten-year-old self would have known what to do with this film, but I'm sure glad to have found it as an adult.

A curious mix of grown-up Goonies, Deliverance, and Wrong Turn, The Zero Boys ticks a lot of boxes on my list. The titular crew of weekend warriors feels a lot like overgrown pre-teens, even though they are clearly in their twenties. When they stumble onto someone else's cabin to stay for the night, things start to get bloody and the whole thing takes a decidedly violent and bloody turn.

Mastorakis was no stranger to violence, in fact not only did he make a perverse art of it with Island of Death, he also made a career out of low budget action potboilers in the '80s. But the nature and feel of the violence in The Zero Boys seems very at odds with the film's jaunty opening in a weekend warrior paintball dual. The group finds themselves at odds with a pair of backwoods torture aficionados that eerily echo real life serial murderers Charles Ng and Leonard Lake who terrorized my northern California during my youth.

Lake and Ng were serial sadists who would abduct women to torture and kill in their backwoods cabin all while a video camera rolled to capture their final moments. This was a story that terrified me as a kid, and even though I'd already begun to explore an academic interest in serial killers, this one was literally very close to where I lived, making the fear less academic and more visceral. The Zero Boys was completed fairly shortly after Lake and Ng were caught, so surely they were aware of the methods and incorporated them into the film, imbuing the whole thing with an unusual sense of dread.

That being said, this feels more like a Friday the 13th film than any other slasher series I can think of. Teenagers having fun being interrupted and stalked by bloodthirsty maniacs who just happen to be silent hillbilly sadists sounds like a party to me. It's an unusually successful cross between teenage action/adventure and horror that really worked for me.

Arrow Video does their typical A+ best in their Blu-ray release of The Zero Boys. We're presented with a brand new 4K (!!!) restoration of the film, approved by Mastorakis and it looks fantastic. There is also an uncompressed LPCM stereo track that sounds amazing. I have no issues with the A/V presentation of The Zero Boys, it is quality work.

As usual, Arrow Video goes above and beyond in terms of their commitment to bonus material for The Zero Boys, helped largely by a director who is enthusiastic about sharing his work. We are presented with a new commentary featuring star Kelli Maroney, moderated by Chris Alexander, which is fun as Maroney clearly has an affection for this film. In addition there is a fantastically unique Nico Mastorakis on... Nico Mastorakis featurette in which Nico plays both himself and his inquisitor to a shockingly amusing and insightful degree. Following that up is an interview with Maroney, perhaps best known for her work in films like Night of the Comet and Fast Times at Ridgemont High, who shares her affinity for the film and Mastorakis as a director. Maroney may play a supporting role in the film, but she's clearly the biggest name and she's very appreciative of the cult following of the film. Lastly is an interview with Nicole Rio, who also stars in the film, and provides more positive memories of the experience. Cap it all off with an excellent essay from James Oliver discussing the film, its place in the culture, and the insane crew (Frank Darabont, Hans Zimmer, etc) and you've got a definitive release for a little known film that deserves a bit more love. Definitely recommended. 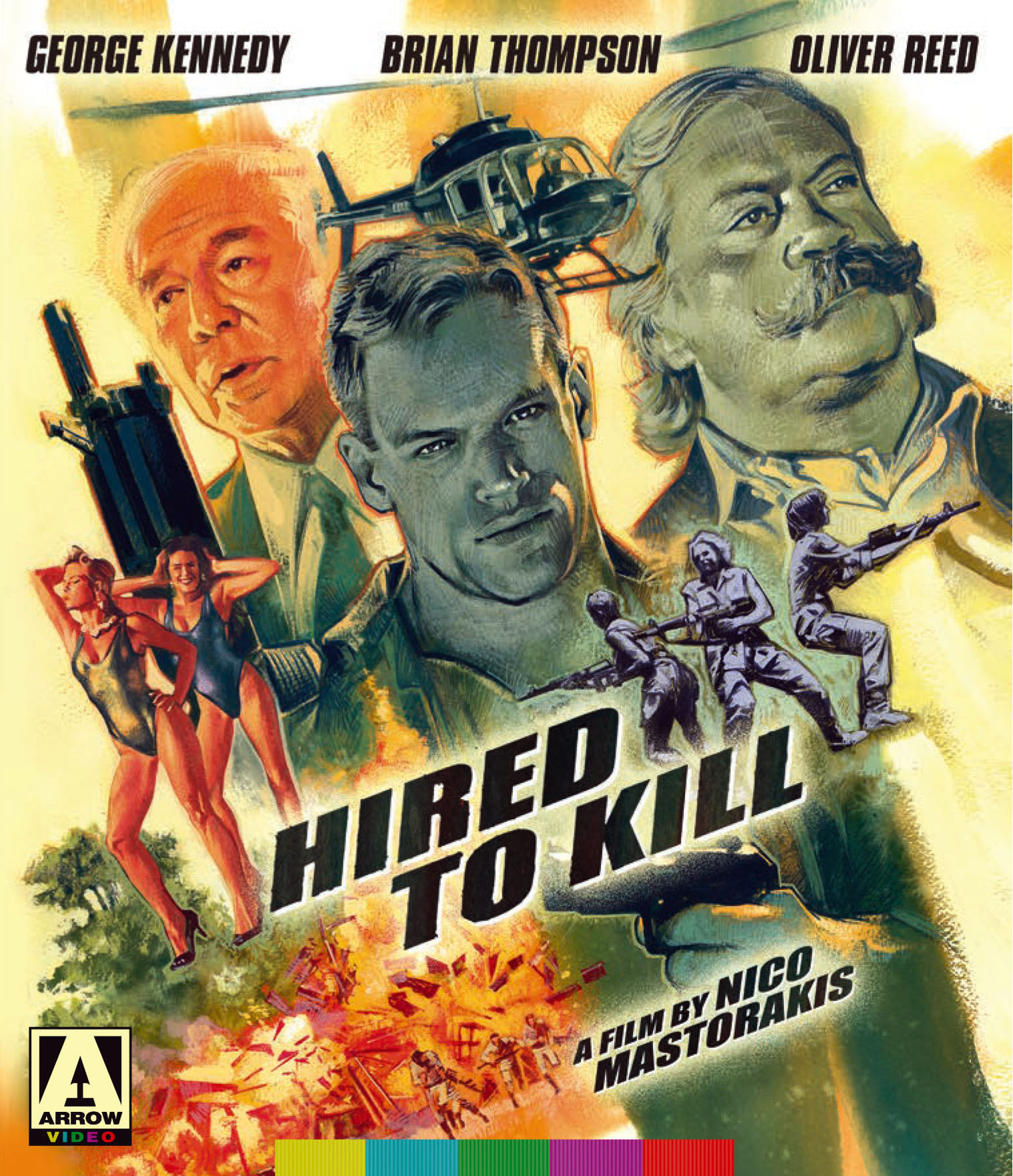 Since I've already broken one of my rules for reviews, I might as well put my head down and charge through the second review:

Starring legendary actors Oliver Reed (Gladiator, The Brood) and George Kennedy (The Delta Force and The Naked Gun series), Hired to Kill is an essential slice of '90s action fare featuring guns, girls and a plethora of budget-busting explosions for good measure. Action movie staple Brian Thompson (whose brief turn in 1984's The Terminator led to a starring role in the 1986 Sylvester Stallone vehicle Cobra) stars as Frank Ryan, a mercenary sent to track down a rebel leader in hostile territory. Posing as a fashion designer, he won't be going it alone, as he'll be aided by seven beautiful - but deadly - female fighters. Whilst the opportunity to see Oliver Reed chewing up the scenery behind an elaborate mustache merits the price of the admission alone,Hired to Kill is also noteworthy as being co-directed by Nico Mastorakis - the man behind such cult favorites as Island of Death and The Zero Boys.

Hired to Kill is a weird movie, man. This Brian Thompson (?) vehicle co-stars the legendary Oliver Reed along with short performances from both George Kennedy and Jose Ferrer. Thompson, the huge hulking beefcake, as a fey fashion designer in a Cuba-esque banana republic that is actually Greece. Seven female guerilla fighters busted out of prison to take on this super secret job and pose as fashion models. Hired to Kill is the movie Andy Sidaris would have made if he had any sense of moderation, but Mastorakis did it first, and the result is fun, even if it feels like it pulls some punches.

There's not a whole lot to say about Hired to Kill that couldn't be said about a thousand other action films from the late '80s. It's a clever little film designed to look much bigger than its budget. Thompson is a better actor here than I would have ever given him credit for, even if the dialogue is about as hokey as it comes. What's probably most memorable about the film is what it doesn't do. There are seven beautiful women and most of them keep their clothes on for the entire film, it's a Skinemax movie without the skin. The action is pretty low key, but thankfully this was the age before CG, so there are plenty of squibs and explosions to enjoy.

There is nothing particularly outstanding about the film apart from its general good nature. Hired to Kill doesn't have a dark of malevolent tone, unlike Island of Death and The Zero Boys. It's all in good fun, and Mastorakis does a great job of going with the flow. The film may not be any great shakes, but the disc from Arrow Video is well worth checking out.

Once again I'm stunned to say that Hired to Kill is presented on Blu-ray in a brand new 4K restoration from Mastorakis. It looks far better than it has any right to. The audio and video are spectacular, and the A/V quality in general is a cut above your typical cult home video release.

As I said with The Zero Boys Blu-ray, Mastorakis is a home video producer's wet dream in his ability to provide bonus material worth watching. On Hired to Kill we get an insightful commentary from editor Barry Zetlin, nothing earth shattering, but solid for the film. We also get a featurette titled Hired to Direct produced by and starring Nico Mastorakis who describes his trials and tribulations of coming on board to guide the ship when the original director had to bow out due to girl troubles. There is also a great interview with the surprisingly charming Brian Thompson who details not only his performance and experience on Hired to Kill but also his discovery of acting as a career choice and his career in general. Thompson seems like a top class gentleman and the featurette is undeniably likable. We're also treated to the screenplay of the film on BD-ROM as well as a booklet with more writing from James Oliver.

Even though it may be easy to dismiss Hired to Kill as a simple '80s action programmer, this disc is more than worth the purchase for the presentation and supplementary materials. Definitely recommended.