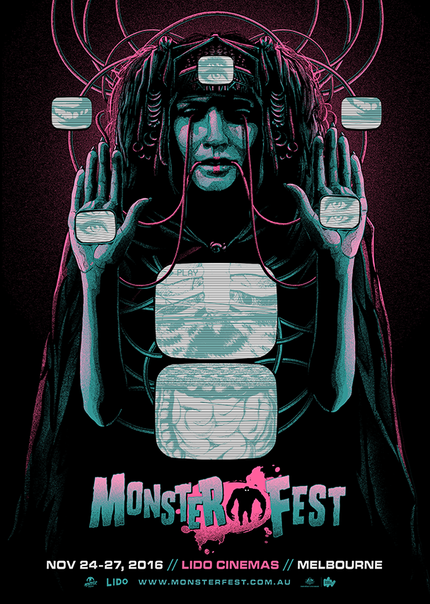 I will be very envious of Australians this coming November, when Monster Fest is unleashed upon Melbourne. Under the guide of the new festival director, Kier-la Janisse (author of House of Psychotic Women, founder of the amazing Miskatonic Institute of Horror Studies), I have no doubt that it will be a spectacular year for genre films fans down under. And the new poster, designed by Canadian artists Matt Ryan Tobin, is quite spectacular.

Not only that, but Janisse has gathered around her a pretty outstanding group of programmers, including Senses of Cinema co-editor Alexandra Heller-Nicholas, Monster Pictures' Neil Foley, and author and American Cinematheque programmer Chris D.

Submissions are still open for the festival until August 12, 2016 for Features, Short Films and Expanded Cinema Projects. Submissions can be processed via Film Freeway, Without a Box and Film Festival Life. Details and submission guidelines are available at www.monsterfest.com.au

Full details on the programming team below.

Monster Fest, Australia’s premier festival of cult, horror and the fantastic, returns for its sixth edition November 24-27, 2016 at the Lido Cinemas in Melbourne, with support from Screen Australia and Film Victoria – and they’ve just unveiled a poster to die for.

Illustrated by Canadian artist Matt Ryan Tobin, the 2016 poster ties in with this year’s theme of ‘ritual’; In particular, it points to our ritualistic relationship to screens of all sizes, which is especially relevant in a festival context. “We fell in love with Matt’s alternative posters for Suspiria, Halloween III, Nightcrawler and more,” says Festival Director Kier-La Janisse, “We knew he could do something witchy that also tied into notions of broadcasting, screen ubiquity and ‘infected’ channels that invoke audiences to join the Cult of Monster.”

“I’m really excited about having someone of Chris D’s stature join the team this year,” says Janisse. “He’s got exquisite taste and brings a wealth of experience to the festival. Not to mention our returning shorts programmers and the dynamic duo of Andrew Nette and Dean Brandum, who are delving into the depths of cinema obscura to bring us the strongest repertory programming of any Monster Fest to date.”

Monster Fest 2016 will feature highly anticipated Australian premieres alongside festival favourites and repertory classics, with international special guests, industry panels and events, exhibitions, vendor booths, parties and more to be announced in the coming months. The festival was established in 2011 by Neil Foley and Grant Hardie as the exhibition arm of Monster Pictures, and since that time has garnered a reputation for showcasing some of the finest new independent genre films in the world, giving Australian audiences an opportunity to experience them on the big screen, both at the annual festival in Melbourne and at satellite events throughout Australia year round.

Kier-La Janisse is a film writer and programmer, Editor-in-Chief of Spectacular Optical Publications, founding director of The Miskatonic Institute of Horror Studies and the Festival Director of Monster Fest in Melbourne, Australia. She has been a programmer for the Alamo Drafthouse Cinema and Fantastic Fest in Austin, Texas, co-founded Montreal microcinema Blue Sunshine, founded the CineMuerte Horror Film Festival (1999-2005) in Vancouver and was the subject of the documentary Celluloid Horror (2005). She has written for Incite: Journal of Experimental Media, Filmmaker, Offscreen, Shindig!, Rue Morgue and Fangoria magazines, has contributed to Destroy All Movies!! The Complete Guide to Punks on Film (Fantagraphics, 2011), and is the author of A Violent Professional: The Films of Luciano Rossi (FAB Press, 2007) and House of Psychotic Women: An Autobiographical Topography of Female Neurosis in Horror and Exploitation Films (FAB Press, 2012). She co-edited and published the anthology books KID POWER! about kids in cult film and television and Satanic Panic: Pop-Cultural Paranoia in the 1980s. She is currently working on the book A Song From the Heart Beats the Devil Every Time about children’s programming from 1965-1985 and a monograph about Monte Hellman's Cockfighter.

Chris D. (aka Chris Desjardins) received an MFA in Communication Arts (emphasis Screenwriting) from Loyola Marymount University in Los Angeles in 1977 and became involved in the Los Angeles punk scene as a writer for Slash magazine later that same year. He was an A&R rep and in-house producer at Slash Records/Ruby Records from 1980-1984. He is also known as the singer/songwriter of the bands The Flesh Eaters, Divine Horsemen and Stone by Stone. He saw release of his first feature film as director, I PASS FOR HUMAN, in 2004 (and its DVD release in 2006), and worked as a programmer at The American Cinematheque in Hollywood, California from 1999-2009. His groundbreaking study on 1960s-1970s Japanese genre filmmakers, OUTLAW MASTERS OF JAPANESE FILM, was published by IB Tauris in 2005. Chris also taught film genre history courses, including Evolution of the Horror Film and Examining Film Noir, at Academy of Art University in San Francisco between 2009 – 2013. His anthology A MINUTE TO PRAY, A SECOND TO DIE, a 500 page collection of all of his poetry and song lyrics, plus dream journal entries was published in December, 2009. He wrote chapters on Joseph Losey and Otto Preminger in FILM NOIR: THE DIRECTORS, edited by Alain Silver & James Ursini, from Limelight Editions in 2012. Between 2010 – 2013, Chris D. published 5 novels and a short story collection, and April 2013 saw the release of his 800 page non-fiction GUN AND SWORD: An Encyclopedia of Japanese Gangster Films 1955-1980, all from Poison Fang Books. He is also the author of a chapter (“Punk as a Young Adult”) in the UNDER THE BIG BLACK SUN book by John Doe & Tom DeSavia, published in April, 2016 by DeCapo Press.
Alexandra Heller-Nicholas
Shorts Programmer

Alexandra Heller-Nicholas is a writer and award-winning film critic. She is a co-host on the Triple R film criticism programme Plato’s Cave and a co-editor of the journal Senses of Cinema. Alex writes books on horror and cult film, including Rape-Revenge Films: A Critical Study (2011), Found Footage Horror Films: Fear and the Appearance of Reality (2014), Devil’s Advocates: Suspiria (2015) and Cultographies: Ms. 45 (2017), and has written for Metro Magazine, Scream Magazine, Overland Literary Journal, Radio National, Bright Lights Film Journal, 4:3 and Kill Your Darlings.
Catherine Seccombe
Shorts Programmer

Catherine has been in love with horror and genre film and TV since the age of 7, when a dodgy babysitter let her rent whatever she wanted from the video store and she proceeded to work her way through the shelves, cover by lurid cover. Since completing a Cinema Studies degree, Catherine has worked in film preservation and archival research at the National Film and Sound Archive, content acquisition and programming at SBS Television, theatrical distribution with Madman Entertainment and program research at ABC Television. She was the Monster Fest 2014 Shorts Director and head shorts programmer and is very excited to be involved again in 2016.
Hussein Khoder
Shorts Programmer

Hussein Khoder is a filmmaker and festival programmer from Melbourne, Australia. When he is not sucking in as much knowledge as possible from all the films he watches, he works on any film he can get on. While still in film school he joined the Melbourne Underground Film Festival, where he held the position of assistant director and short film curator from 2012-2014. Monster Fest 2016 is his second year as a short film curator for Monster Fest.
Andrew Nette
2016 Guest Programmer

Andrew Nette is a writer of fiction and non-fiction, with an interest in film and Australian television. His articles and reviews have appeared in a number of print and on-line sites. He is the author of two crime novels, Ghost Money, a crime story set in Cambodia in the mid-nineties, and Gunshine State, out in the second half of 2016.  He is co-editor of Beat Girls, Love Tribes and Real Cool Cats: Pulp Fiction and Youth Culture, from the 1950s - 1980s. His online home is www.pulpcurry.com. You can find him on Twitter at @Pulpcurry.

Dean Brandum achieved his PhD in 2016, focusing on a new methodology for interpreting historical box office data. He has taught at a number of universities in Melbourne and has contributed to various books, magazines and journals. Although his interests cover the gamut of cinema – from sexploitation to classical Hollywood, his prime interest lies in the history of film exhibition. As a collector of memorabilia and ephemera, his website, www.technicolouryawn.com examines how films were exhibited in Melbourne. Currently he is working on the first issue of a spin-off magazine devoted to the topic.