Review: WARCRAFT Should Please The Fans 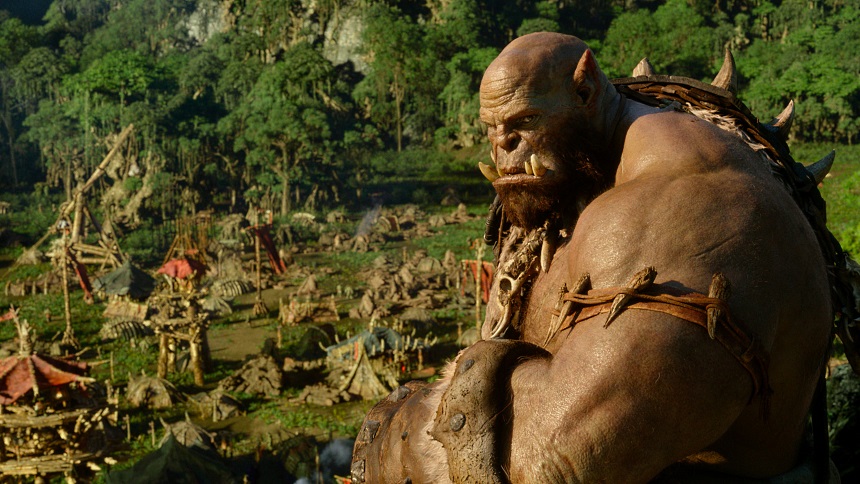 Once upon a time (1992), videogame developer Westwood Studios released a science fiction game called Dune 2, in which battling armies had to balance resource management with fighting, and almost by accident the Real-Time Strategy genre was invented. Dune 2 was fun to play, addictive as hell and very successful, so it didn't take long for copycats to appear. Among the best of those was Blizzard Entertainment's fantasy-themed Warcraft: Orcs & Humans from 1994, which started a franchise of its own. A few years later, with the rise of the Internet and online gaming, Massively Multiplayer Role Playing Games (MMORPGs) like Ultima Online and Everquest became all the rage. In 2004 Blizzard Entertainment released an MMORPG game set in the Warcraft universe, called World of Warcraft, and the rest is history. Blizzard's game was miles ahead of the competition in technical merits, gameplay mechanics and... well... fun! It hit the market like a nuclear blast. To this day, over 100 million accounts have been made, and an estimated 10 million people still play the game regularly.

A lengthy introduction, I admit, but few adaptations can boast quite this history and fanbase. And with that kind of brand recognition, it is not weird that a film adaptation has often been contemplated, especially after the huge commercial success of the Lord of the Rings films. Still, it took several restarts and changes in command before we got an announcement that a production was actually on its way. The end result, simply called Warcraft, hits North America sometime next week, and in parts of Europe, Africa and Asia it is out already, under the slightly different (yet pretty descriptive) title Warcraft: The Beginning.

Me, I haven't played any of the Warcraft games (I'm a Starcraft kind-of guy), so the title itself didn't entice me. What lured me to the screening was the director: Duncan Jones, of Moon and Source Code fame. While they are hardly perfect, I like both of those films a lot, and even if Duncan Jones might hit some keys too soft and others too hard, I can appreciate the machinery he dares tinker with.

A self-professed Warcraft enthusiast, with this adaptation Duncan has had quite some tightrope acts to fulfill. Which audience should he aim for? Lean towards fans of the game, or try to appeal to the unknowing mainstream? Go for the gritty or the glamorous? What to focus on? What to assume as known lore and what to explain? It doesn't help that the Warcraft games are.. well, videogames, created with stories and design roots which are on purpose easily identifiable and derivative. Fans of Tolkien and players of Dungeons and Dragons (with a lot of Tolkien again, indirectly) can recognize lots already, so how do you make this film distinguishable? Blizzard's famous superpowers in achieving playability can not be used here...

The final choices made are interesting ones though. For the story, the film uses the plot of the very first 1994 game, which kept the landscape relatively uncluttered with basically only two main races. The home of the Orcs is a dying rock, but with evil magic they manage to open a portal to a fresh new world populated by puny humans, and promptly invade it. But both within the Orc army and the defending Human army, there are people doubting who is behind the creation of that portal. Also, both sides wonder if the magic involved in opening it isn't maybe a bit TOO evil.

Within that storyline, Duncan Jones fully goes for the dark and serious aspects. Genocides, mass murders, doing something bad to save or protect your children... it's in here. The violence shown teeters on the very edge of PG-13, and what is implied rather than shown is very gruesome indeed. But design-wise Duncan went the other way, towards the glamorous fairy-tale look of the games. Everything looks exaggerated, be it beautiful or evil. Magic looks like firework, eyes are aglow aplenty, forests are colorful and cities look like joyful theme parks.

Whether this strange combination of seriousness and twee works for you will most likely be a deciding factor for your enjoyment of the film. What definitely helps is the stellar special effects work done here, especially on the Orcs' faces, which are a step up from even what we saw in Avatar. There's a conversation early in the film which shows subtle twitches, tics and laughter in the faces, and it looks totally real instead of forced or exaggerated, withstanding scrutiny even when magnified on the big screen.

In the end, as a non-player of the game I was pleasantly surprised by how much I liked the film. Yes, it's derivative as all hell, but I've never seen the fantasy clichés embraced this respectfully or shown this beautifully. At the same time no punches are pulled on the main cast, who are all put through the emotional fairy-tale wringer, and who all act as if they belong in this place. Forget about seeing any meta-winking, this is not the film for it. There is a dedication present in telling a ridicule-prone story straight, for entertainment purposes, which I really like (on that subject, also read Peter Martin's column here).

Interestingly, the Warcraft players in the audience went wild, waves of delighted appreciative mutterings going through the venue whenever some known (to them) creature or location got shown. At the sold-out Monday late-evening 3D-IMAX screening I attended, the film got an applause when the credits came up, and the lobby was filled with starry-eyed fans discussing favorite bits.

For me, it was like the previous Duncan Jones films I saw, also because once he picks a flavor or mood for his film, he tends to stick with it. Again, he may have hit some keys too soft and others too hard, and this sure won't become a classic for the ages, but I thoroughly enjoyed myself and am looking forward to what he'll do next. Warcraft can't have been an easy project, yet he managed to sail it around most pitfalls towards a pretty decent end result. As coincidence will have it, while I was watching his film yesterday he had his 45th birthday, so hopefully there's still plenty more to expect from him in the future.


(Warcraft will premiere in North America on the 10th of June, but is already out in several European, African and Asian countries.)