Review: HERE ALONE, Having Loved And Lost In Time Of The Apocalypse 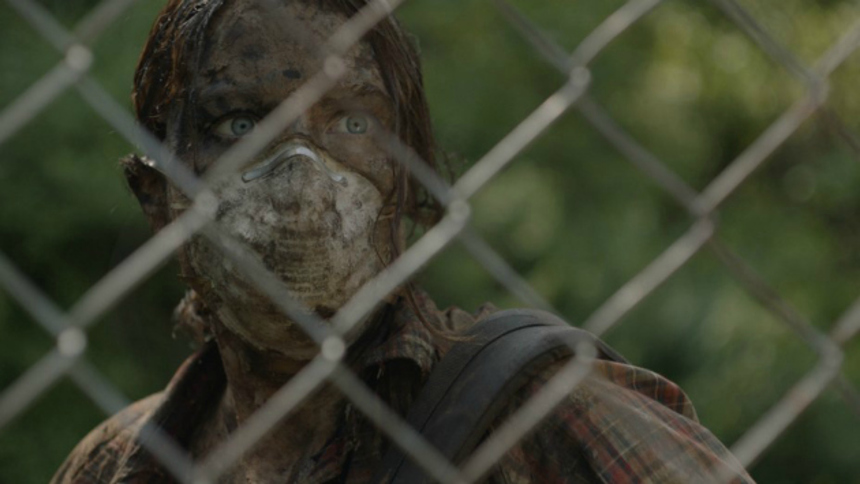 'Tis better to have loved and lost

Than never to have loved at all.

These lines are often taken out of their context (the author’s mourning the loss of a dear friend) to mean the end of a romantic relationship, that we are to find some consolation in this time of grief, that we at least loved for a time in our life. The rest of us, with dour expressions on our faces, saying never having felt of the pain of such loss ‘tis better instead. Loneliness hurts less than such loss.

And then there is an apocalypse, which brings us to Ann in Rod Blackhurst’s apocalyptic survival tale Here Alone. A story about a woman who has found and taken comfort on both sides of that coin, having loved and lost then loved again.

Ann and her husband Jason fled into the woods of upper state New York after a deadly virus began to plague the populace. From Jason, Ann learnt as much as she can about surviving on their own in the wild and live off the land. The cities and towns have become danger zones full of the infected feeding off of the dead. All on her own now, Ann scarcely ventures into the local towns for remaining scraps of food; not without a tremendous amount of preparation.

One day she happens upon Chris and Olivia struggling down the road. She takes them to her camp where they can rest for a couple days. Chris is taking his step-daughter North to where the virus has reportedly not struck yet. What begins as a couple days extends longer and longer and soon Ann finds herself opening up to Chris and dropping her guard; she has been on her own for so long. With the threat of the infected coming into the woods will Ann leave the safety of her camp and start a new life with Chris and Olivia?

Here Alone is a story about isolation and attachment and the risks that come with either of them. The film asks if we should be alone at a time of crisis, can we survive on our own, or, together with others? What are the risks with either of those scenarios? On one side you have no one to watch your back, protect and love you, remind you of what it means to be alive and human. On the other side what were everyday emotional conflicts could now mean the difference between life and death.

Conventional horror rules state, the moment someone in the group says it should split up marks the moment where everyone begins to die. Blackhurst’s film brings together not a group, but still, it still does the opposite to convention and brings individuals together with their own ranges of physical and emotional needs. It is just a matter of when those needs of the individual become a threat to this new group.

Blackhurst’s film has an eerie stillness about it. The lushness of the New York State countryside and nature are the landscape to Ann’s seclusiveness. Often it is the sound of the outdoors and nature that create the soundscape for this story. Here Alone does not rely on high octane thrills or scares to convey the themes and motivate the story. We understand this threat the first time we see her venture into town. We understand that the threat is real, swift and deadly. It sticks in our minds as a reminder of what could happen if one lets their guard down.

The threat of the infected is on everyone’s mind. They could come out of the nearby town and into the woods the moment their food source runs out. If this new group is going to take to the road and head north they will need to go to the nearby town one more time for the last scrap of supplies.

And so, Here Alone has been quietly building up to this moment. This is where Blackhurst and screenwriter David Ebletoft will earn that emotional gut punch that you know has been coming. The slow burn is about to fully ignite. There has been little to do with the infected to this point and the eerie stillness is replaced by the hoarse screams of the infected coming after this fresh meat.

Even in some of these tensest moments our focus is put on the survivors and their reactions to the situations they find themselves in, the screams are a backdrop to their fears. Then comes the devastating punch of the needs of the individual over the needs of the group. It is an act of betrayal which will threaten everyone’s survival.

Here Alone is a story about our humanity, the ups and downs of emotional attachment and need. Even at a time of crisis they can lift us up or let us down. In Here Alone what was the real threat? The infected or ourselves?

Was it better to have never loved at all?

Here Alone premiered at the Tribeca Film Festival a couple weeks ago where it won the Audience Award.