Is This PRAY FOR DEATH/RAGE OF HONOR Giveaway The Baddest? Sho 'Nuff! 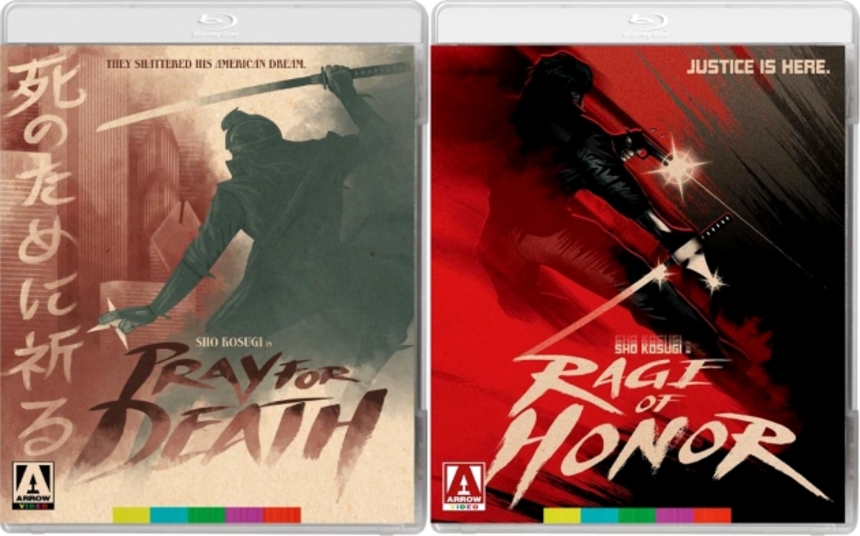 ScreenAnarchy and Arrow Video USA are teaming up for a few very awesome Blu-ray giveaways over the next week and we're happy to start this off with a pair of Sho Kosugi classics, Pray for Death and Rage of Honor. We've checked these discs out and they are awesome!

The Pray for Death disc features the extra-violent uncensored version of the film for the first time ever in HD and Rage of Honor features an exclusive career-retrospective interview with Kosugi. Both discs are fantastic, and just in case you weren't sold, here are a couple of excerpts from my reviews of each.

Pray for Death was cut to receive an R rating for theatrical release and for years the only home video releases in the US were using this same version of the film, including a fairly recent Fox MOD DVD release. Arrow Video has stepped up their game in including the noticeably gorier and nastier uncut version that has been available on overseas home video for a while. The added footage definitely adds a grittier tone to the film, which is already pretty nasty, but the practical effects utilized in these scenes of violence definitely deserve to be seen.

Thanks to Arrow Video, we now have what is the definitive version of this delightfully over the top movie. Pray for Death does exactly what it sets out to do, and that is to entertain with really awful bad guys, really upstanding good guys, and a whole lot of ninja action. If you ever made ninja stars out of your notebook paper as a kid in school, you’re going to love it!

Like Pray for Death before it, Rage of Honor looks fantastic in this new HD transfer from MGM and Arrow Video. The image is nearly spotless and its appearance belies its age to a large degree. The audio, while not flashy, is also effective and full, in spite of only sporting the original mono track. There are no notable drop outs and no unnecessary noise. Overall a very satisfying A/V presentation.

Arrow Video provides a conclusion to the career spanning interview with Kosugi begun on the Pray for Death disc, and he proves to be an entertaining and affable interview subject. He talks about his later career and hopes for the future comeback after a supporting role in 2009's Ninja Assassin. He talks about his children, and specifically Kane, who has followed in his footsteps making a splash in martial arts films. Overall, the interview is very engaging, and Arrow Video and producer Edwin Samuelson deserve recognition for landing this meeting with Kosugi who hasn't sat for an interview in a long time. Also present is Chris Poggiali to talk about the rush of American ninja films in the eighties. Poggiali discusses the beginning of the trend with Franco Nero's Enter the Ninja all the way through the bitter end, not afraid to mention the fact that many of these films were duds. Rounding out the extras are an interview with composer at large Stelvio Cipriani and a booklet featuring new writing from Derek Botelho as well as an excerpt from Kosugi's forthcoming book, Yin-Yang Code: The Drums of Tenkai-Bo. A wonderfully complete package that is at least as good as the film for which it has been compiled.

To score a chance at this fantastic prize pack, just send an e-mail to me at josh [at] ScreenAnarchy [dot] net with the subject line "Sho Nuff!" and your name and U.S. address in the body. That's it! I'll be drawing one winner next Thursday at noon Central time.

If Sho Kosugi isn't your favorite action star, don't worry, we have a couple of other giveaways coming up over the next week that are sure to pique your interest!

More about Pray for Death

More about Rage of HOnor