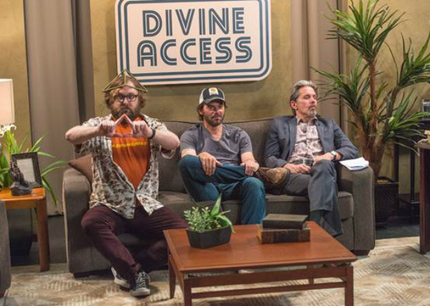 Nobody likes the idea of being replaced, which perhaps explains why Gary Cole is none too happy in our exclusive clip from Divine Access.

As it happens, Cole is one of my personal favorite actors, the kind of supporting player who can steal a scene without anyone noticing. (Check him out on HBO's Veep for his versatile, and very dry, comic work.) He is not the star of the movie, though; that would be Billy Burke, and in this scene he's the one whose presence infuriates Cole. To learn why, read the official synopsis below.

Jack's popularity takes him on the road on a multi-city speaking tour accompanied by Nigel (Joel David Moore), a self-proclaimed "catcher" of overwhelmed believers. Along the way Jack and Nigel are joined by Amber (Dora Madison), a down on her luck call-girl, and Marian (Sarah Shahi), an enigmatic beauty who challenges Jack's beliefs and questions whether he has some deeper calling.

Set in the South, it's a road movie, a buddy picture and an often sweet, thought-provoking story of redemption.

The movie is currently playing in select theaters and is available to watch starting today via various Video On Demand platforms. Check out the clip below; the trailer is there as well to provide a bit more context.