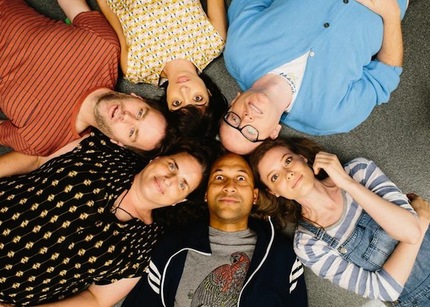 Always a comfy stop on the summer fesitval circuit, the LA Film Festival, announced today the first batch of titles for their 2016 edition, which takes place at the Culver City Arclight Cinemas, June 1 - 9.


The Buzz section of programming features favorites from the 2016 fest circuit, including Mike Birbligia's Don't Think Twice (pictured) and The Music Of Strangers, from Morgan Neville, Oscar-winning director of 20 Feet From Stardom. Meanwhile, Limelight features world premieres of films with notable talent such as Idris Elba (A Hundred Streets), Topher Grace (Opening Night) and Teresa Palmer (Lights Out). Check out the full lineups for both sections below.

Life, Animated - USA (dir. Roger Ross Williams; prod. Roger Ross Williams, Julie Goldman) - Based on Ron Suskind's best-selling book, the emotional story of an autistic boy who is unable to speak for years, but finds a way to communicate to his family by embodying--to precision--his favorite characters in animated Disney movies. LA Premiere

FREE CeCe! - USA (dir. Jacqueline Gares; writ. Laverne Cox, Jacqueline Gares; prod. Laverne Cox) - CeCe McDonald survived a brutal attack, only to be incarcerated for defending her life. After an international movement to free her, CeCe emerges as a leader to interrogate the prison industrial complex and inspire women to fight back when attacked. World Premiere

Lights Out - USA (dir. David F. Sandberg; writ. David F. Sandberg, Eric Heisserer; prod. Lawrence Grey, James Wan; feat. Teresa Palmer, Maria Bello) - A woman and her young brother are haunted by a creature that only appears when the lights go out, and possesses a mysterious attachment to their mother. World Premiere

Do you feel this content is inappropriate or infringes upon your rights? Click here to report it, or see our DMCA policy.
don't think twiceidris elbala film festival 2016LAFFmike birbiglia