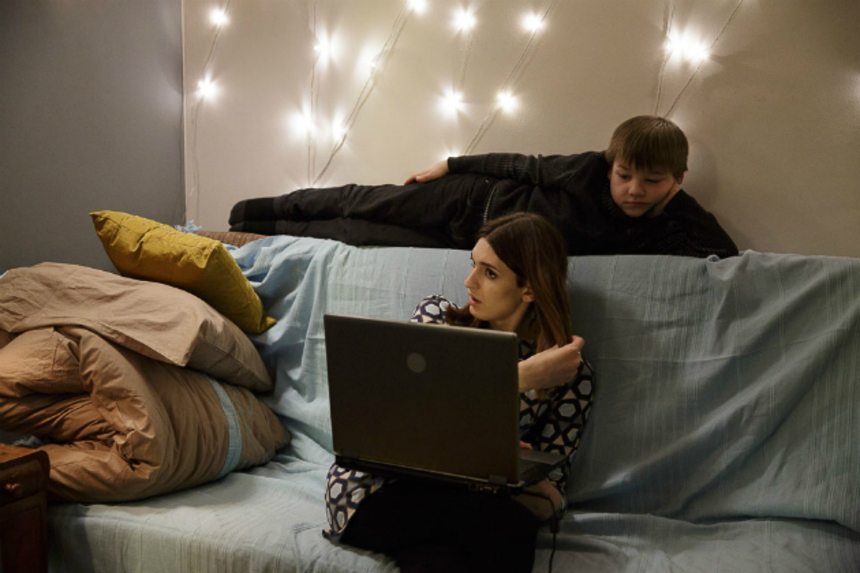 The year 2015 was a pretty turbulent and tough one for the Old Continent. It seems that Europe landed under the sign of nomad. The socio-ethnographic locomotion of the magnitude displayed in previous years and hastily ham-fisted decisions sprung from Brussels made of the situation a sociological experiment. The results will be evolving in decades to come.

Nevertheless, the migration of nations become a heated, if not overheated, theme number one from the upper echelon of political circles right down to civil organizations forging 'yes' and 'no' movements left and right, mostly according to their political compass, from good-intended reasons to a fodder for trolls and other mystical creatures of the internet lore. The migration influx brought many stories, the most prominent already featured all over the news.

In a case of such a massive impact on society, the events translate into arts and culture almost immediately, cinema not being an exception. A collective of ten young Swiss filmmakers touched upon the theme in the omnibus film Wonderland (in original title Heimatland), though not exactly in reaction to the actual crisis as in a psycho-social vivisection of a famously neutral country and looming latent xenophobia. Without the fear of being found politically incorrect – as 2015 may enter into the history books also as the year of political correctness as well - their collective effort attempted to unmask what lies behind unspools in pre-apocalyptic frame.

The theme of migration albeit not topically and directly connected to the current situation in European Union is tackled by Polish trio of budding filmmakers in their collective feature debut New World, a portmanteau film capped by three different fates. While the Swiss troop optioned for holding a mirror to the nation´s face, Elżbieta Benkowska, Łukasz Ostalski and Michał Wawrzecki took more civil road to depict living in an adopted homeland in a triptych of portraits anchored into the safe haven of Poland. With the title bearing enough referential power, it could as well be New Life since the migration itself is smartly downplayed as character´s background yet still latently present in day-to-day proceedings.

Benkowska, Ostalski and Wawrzecki engineered their mini-narratives by wedged the protagonists in between two layers - psychological and social - with the latter not being always the issue of adapting and being adapted to a foreign environment. Barring the fact that all three of them fled for one reason or another from their motherlands would left the basic story structure more or less untouched and still potent. Their foreigner status only enhances the drama via topical context.

The narrative style and the construction of the plot thrives New World. The economy of short film stories erases any obsoleteness leaving the sujet unburdened by clichés or unnecessary wadding throttling back the narration. The anthology mines the best out of episodic format, having one character to deal with one issue in the first plane while smartly drafting motives and supporting characters. The possible appellative nature vanishes under the urgency of personal struggle tilting towards psychological drama. The driving force behind each story and character proceeding is a dilemma. It does not play so obviously in each of the story even though it is their backbone. And the dilemma does not revolve around the question of migration.

Belarusian Zhanna (a segment directed by Elżbieta Benkowska) settled down in Warsaw with her little daughter and her adaptation process resembles the collectively accepted formula of economic migrants, an event Ulrich Seidl depicts with gusto and relevant bravado when west meets east in Import/Export. Earning a living in perspective-less job as a cleaner she pursues a degree at local university to reach for better life. Her situation is more complicated since she not only carries the baggage of her nationality as much as that of her former life. The father of her child and what appears still a legal husband does not really shake hands with Belarusian potentates, their departing country.

Quite contrary, as an oppositionist he ruffles their feather with punk provocative songs for which he is rewarded with several sojourns behind cold bars. Zhanna moves on, from country and from the relationship yet the shadow of her husband´s action won´t leave her living her “normal” life as she is forced to attend press meetings seeking media support in a cry for his liberation.

Insult to injury, such media image let her be perceived as a victim casted to the mercy of strangers feeling sorry for her. The nature of leading characters eschews categorization on the moral spectrum as the directors carved them from imperfect marble, not a damaged goods but or cynical depictions as human, pulling their protagonists and their stories into the realistic and civil vein.

Second story throws interpreter for war operations in Afghanistan, Azzam (directed by Michał Wawrzecki), from the traumatizing battlefield into kitchen of a night club under the auspice of the club´s boss and his former colleague from the fire of war. Besides the tightly sketched episodes, the filmmakers benefited from a pseudo-genre template whilst Zhanna´s strife for new life has markings of family drama, Azzam´s tribulations are embodied in a ménage à trois of which he is one side unwillingly and unwittingly purely for narrative purposes of confrontation-driven plot and twists as a design to treat his love life. Receiving advances from male and female colleague, Azzam´s scarred subconscious and paralyzing PTSD are his number one concern.

The protagonist plan thwarts his father´s unannounced visit who hauls Wiera´s son, the ultimate argument to obstruct sex-change operation. Ostalski´s keep the tone within civil spectrum not slipping into sentimental neither melodramatic eschewing corny alternations on the subject however the child is the harbinger of dilemma putting the eternal struggle on the weight scale – to be or not be self-sacrificing or selfish parent. Ostalski structures his story considerably tightly, more plot-driven avoiding contemplative pauses transferring the burden of answer towards the end and out of frame.

The trio of budding Polish filmmakers deliver a humane look at troubling situations in which immigrant status is not a factor. Nevertheless, it ensures the topicality and contributes to discussions echoing all over Europe. New World deals with life dilemmas and circumstances that make decisions even harder.

Benkowska, Ostalski and Wawrzecki elude the scalding political issue of the affair, as well as the political conundrum of human rights. They did not shy away completely from political essentials, however, since the filmmakers used common reasons for immigration as a narrative device for the exposition of individual struggles – political harassment and dissent, fear for life in war-torn countries or seeking a more open-minded environment.

The angle of personal drama in the latter stage of immigration, not dealing with the integration itself and the form of discussion about immigrants, makes New World a more universal venture on restart life with a clean slate. With the burden of the past partially left behind, New World does not slip into the corny territory of a fairy-tale bivalent conclusion. Instead, it presents the plight as a dilemma-ridden survival caught in a grey area.

Do you feel this content is inappropriate or infringes upon your rights? Click here to report it, or see our DMCA policy.
anthologydramaElżbieta BenkowskaŁukasz OstalskiMichał WawrzeckiNew WorldPoland