Something Is Coming Out Of The Marshland: SWAMP THING Score To Be Re-released 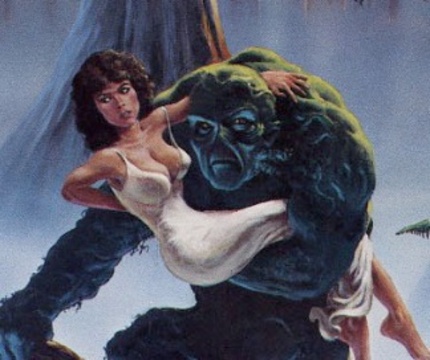 Music label Varèse Sarabande is planning a digital and CD release of the score for the pulpy Swamp Thing.
Originally released on LP in 1982 by the label, the highly sought after soundtrack features the film’s original score by Harry Manfredini (Friday the 13th series). The composer worked with Wes Craven again on two other occasions: he did the score for the sequel of The Hills Have Eyes and the Robert Kurtzman directed and Craven produced Wishmaster
The fourth film Craven released in theathers in 1982, Swamp Thing is a somewhat peculiar film in the director's ouvre, mixing the monstruous and the pathetic with a pulp comic book sensiblity. The film is based on characters from the DC Comic book series written by Len Wein, and spawned both a sequel and a TV series, which aired on USA Network from 1990-1993.
About his work on the film, Manfredini said in 2013: "I had a two-note whole tone phrase that denoted the magic formula. It is a quick way to evoke to the audience an element of the film”

Manfredini has spent most of his life in music, scoring over 100 films. His major feature credits include the highly popular Friday the 13th series and House. Although Manfredini's music is associated with the horror genre, his work also has been those of dramatic scores featured in films such as A Gun, A Car and a Blond and Hidden Agenda.

The release date for the Swamp Thing soundtrack is yet to be announced.

Do you feel this content is inappropriate or infringes upon your rights? Click here to report it, or see our DMCA policy.
1982CDdigitalharry manfredinire-releasescoresoundtrackswamp thingwes craven