Review: KNIGHT OF CUPS, A Malick For The New Day 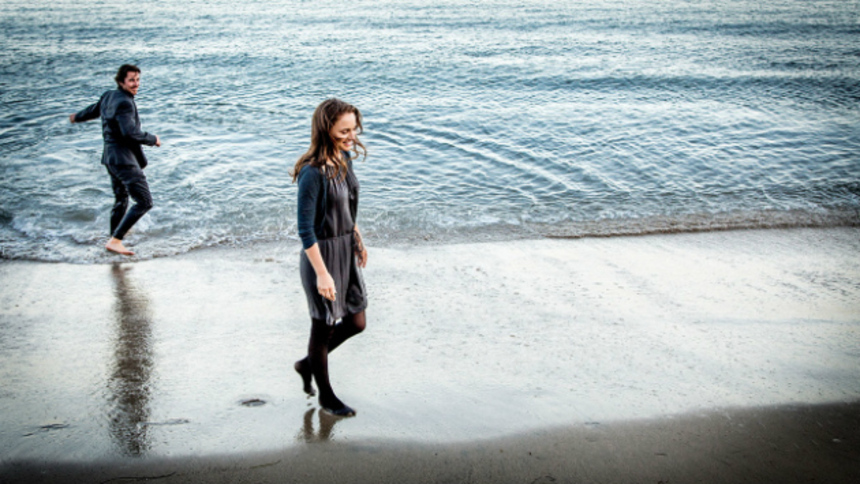 Rejoice ye fans of Terrence Malick - your wily transcendentalist has emerged again! And though the film doesn't equal (ahem... transcend) his previous highs, Knight Of Cups at least finds the idiosyncratic auteur trying something new.

Malick's style remains the same; by this point, it should be familiar to us all. The camera stays nimble and low, circling the actors and pushing in close, all while staring up at them in low-angled awe. Conventional scene structures and dialogue exchanges are altogether left out; replaced with glimpses of interactions begun in media res and whispered voiceovers of feelings and thoughts. In the Malickverse (assisted by phenomenal DP Emmanuel Lubezki), every hour is magic hour. Like I said - you know how it is.
Here, the filmmaker doesn't so much change his style as repurpose it. Malick reigns as the poet-philosopher of nature's sublime, but he sets significant parts of Knight Of Cups in freeways and parking lots, at nightclubs and fashions shoots, in pre-fab sound stages and (horror of horrors!) soulless Las Vegas. He takes his unique perspective and uses it to explore something he's never quite done before: the plight of the alienated rich. With its intersection of luxury and loneliness, Knight Of Cups feels like a song from Sofia Coppola's songbook, sung in Malick's chant.
Christian Bale stars as Rick, a Hollywood big shot of some sort or another (it's unclear whether he's an actor or a screenwriter. Whatever the case, we never see him 'at work', but he is delivered a giant bag of cash on a studio backlot, so good job Rick). Rick is financially secure and emotionally adrift, a floater by who has everything and feels nothing. We float with him as he navigates his many relationships, from ageing father Brian Dennehy, to unstable brother Wes Bentley - both reeling from the death of another brother - to ex-wife Cate Blanchett, who literally spends her days treating lepers, because it's Malick we're talking about, and somebody's gotta be beatified.
Beyond those slight carryovers from The Tree Of Life, the rest is new ground. The bulk of the film focuses on Rick's many romantic flings, in chapters introduced by cards of the Tarot. Death. The Enchantress. The Sun and The Moon. Natalie Portman the married woman, Freida Pinto the model, Teresa Palmer the exotic dancer. And more. Together, they infuse the film (and one would assume, its aging director) with a youthful and frankly sexual energy heretofore unseen in his work. Rick, of course, is the titular Knight of Cups, the amnesiac gallant doomed forever to search and never to find. Like the tide, Rick throws himself into each arrangement, but just as well, ends up back where he began, victim of his own listlessness and of that around him. Alienation and affluence, always you wrestle in me. 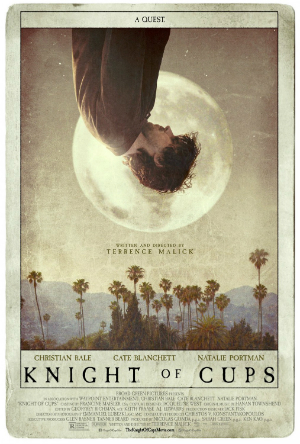 Though Rick is the only character we follow all the way through, onscreen in almost every shot, we never do get to know him. His interior life is entirely external - based on the specifics and inner thoughts of whomever else he is with. At one point a girlfriend whispers, "you don't want to feel love... you only want to the experience of it", and that sounds about right. Rick is a superficial bore, searching for The Truth with a tourist's remove. Las Vegas, where the fake Sphinx stares down a scale Eiffel Tower, is his natural refuge.
Knight of Cups works best when Malick trains his camera at those unexpected places. Looking upward at our characters from a dance floor, we don't see Badlands' endless sky. We see girders and light fixtures, electrical wiring and the grey ceiling. The party may be raging down here, but it doesn't go very far at all.
Then again, neither does the film. Those standalone sequences may sparkle, but they are also repeated at length. In this way, Knight Of Cups falls victim to what fells so many of its type. That is, it's hard to make a film about alienation and repetition without being alienating and repetitive. More than in any of his previous work, there is little development or insight to be had. I appreciate beautiful women and spectacular shots as much as anyone else, but the film is ultimately a deflating watch.
Still, that might say more about my expectations than it does about the work proper. We ought not fault an artist for sticking through to their intended goal. Knight Of Cups may not have the same passion and sweep as the director's previous films, but it doesn't prevent us from returning to them either, if that's what we seek. Instead we are offered a Malick for the new day. For the vast majority of his fans, that's probably all I ever needed to say.
Review originally published during the Berlinale in February 2015. The film opens in select theaters in the U.S. on Friday, March 4.
Sign-In to Vote
Tweet 0 Submit

More about Knight of Cups

What happened to the movie he filmed in Austin with Ryan Gosling and Rooney Mara? It seems like I read about it 2-3 years ago.

He shot that around the same time he shot this. So most likely he'll surprise us with that one within the next year or two.

They were shot back to back. It's called Weightless, and it's with Gosling, Bale, Blanchett, Mara, Portman, Fassbender, del Toro, and Val Kilmer.