Berlinale 2016 Review: THE WORLD OF US, A Complex And Compelling Children's Tale 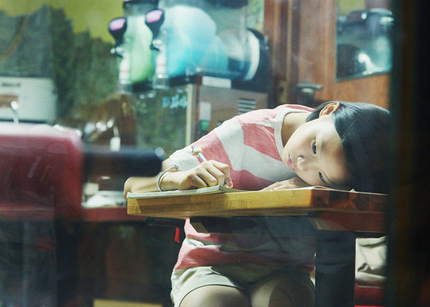 Following the enormous promise shown in her terrific shorts Guest (2011) and Sprout (2013), director Yoon Ga-eun delivers in spades with her feature-length debut The World of Us, a beautiful look at the undulating friendships and rivalries between a trio of 10-year-old girls. Yoon returns to the Generations program of the Berlin International Film Festival, where Sprout was awarded the Crystal Bear for Best Short Film in 2014.

Sun is a quiet girl from a poor family, always chosen last for sports teams at school and picked on by her classmates. She bumps into Jia, a new transfer student, on the last day of term and they grow close during the summer break. They do so in spite of their differences, as Jia comes from a wealthier background and barely sees her parents, who are divorced.

But Jia's attitude quickly changes when term starts again and, learning of Sun's poor standing among the class, she aligns herself the class bully. But, with new information coming to light, the ties between these three girls stays in perpetual flux.

Much like in Yoon's accomplished shorts, which deal with similar themes of young children experiencing tumultuous adult emotions for the first time, not to mention the social pressures, some unique to Korea, that accompany them, The World of Us remains faithful and non-judgemental towards its characters throughout. The camera is almost always closely trained on its young protagonists and only ever breaks away from their faces to show us peripheral characters from their point of view.

Sun is the girl we spend the most time with and on the surface seems to be the most disadvantaged. Her family is barely scrapping by, which leaves her with hand-me-down clothes and little opportunity to ameliorate her social rank in school. Exacerbating the situation is her father, who takes to the bottle every night, cursing out his own father. Yet, despite her obvious tribulations, it soon becomes clear that Sun is also the most content among the bunch. She is kind, considerate and lucky to receive tender love and care from her doting and hard-working mother.

As the narrative reveals, Jia and the bully may live with better circumstances, but they also feel an undue amount of pressure to perform or appear in a certain way, particularly given their young age. Yoon slowly drip-feeds us the information needed to suss out the underlying reasons that provoke the behavior they exhibit in social settings.

Yet, as important as this context is, Yoon's foremost concern remains the girls themselves, their choices and behavior. Fresh and unaffected, the triumvirate of young amateur performers she has assembled for her debut are excellent throughout, lending the film an emotional ballast that would be impossible to achieve through artifice.

Diving into the emotional palettes of young girls with an unadorned and limpid style, The World of Us triumphs as an exploration of human relationships than avers itself to be far more complex than most adult dramas.

The World of Us

Do you feel this content is inappropriate or infringes upon your rights? Click here to report it, or see our DMCA policy.
berlinalegenerationsthe world of usyoon ga-eun우리들윤가은Ga-eun YoonDramaFamily

More about The World of Us