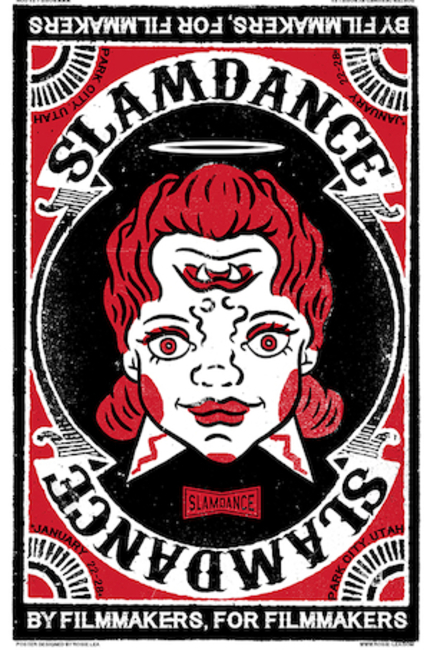 Tonight saw the 22nd Annual Slamdance Film Festival come to a close with filmmakers packing every inch of the Treasure Mountain Inn's ballroom for the awards ceremony.

Top winners include my personal favorite from the festival, Driftwood, which won the Grand Jury Prize for Narrative feature. A bold and unique vision from director Paul Taylor, Driftwood proves yet again that Slamdance is home to fresh and exciting cinematic voices year in and year out (other recent Grand Jury winner include ScreenAnarchy Favorite The Dirties and Tired Moonlight). Special Jury mention for Narrative was given to Hunky Dory, while Grand Jury for Documentary went to The Million-Dollar Duck (which also nabbed the Doc Audience Award). You can find the full list of award winners below, and be sure to keep an eye out for a few more reviews from the fest in the coming days.

Jury Award for Narrative Feature: DRIFTWOOD, dir. by Paul Taylor
"A thoroughly original outsider voice that leaves us eager to see what the filmmaker creates next."
The award winner was granted $3,500 in legal services from Pierce Law Group.

Jury Award for Documentary Feature: THE MILLION DOLLAR DUCK, dir. by Brian Golden Davis
"With humor and empathy, The Million Dollar Duck looks into the little-known world of avid, nature-loving duck painters who seek to win the glory and financial dividend of being on a federal stamp. Artfully shot and edited, with a colorful cast of characters, the film weaves these human stories into the larger picture of how the annual competition has served to create and protect America's many wildlife refuges. It's about more than the duck."
The award winner was granted $3,500 in legal services from Pierce Law Group.

Jury Honorable Mention for Documentary Feature: ART OF THE PRANK, dir. by Andrea Marini
"Shining a spotlight on an interesting person whose mission isn't likely to get exposure from the media, since the media is his deserving victim. Told with a mischievous glee, the artfulness of this film mirrors its content."

Jury Award for Documentary Short: IF MAMA AIN'T HAPPY, NOBODY'S HAPPY, dir. by Mea de Jong
"Multi-generational traditions examined from two very different perspectives within a family. Charming sweetness and comedic sadness, all rolled into one thought-provoking short film. A film that makes clear the power of women who go it alone and take charge of their lives when men disappoint."
The award winner qualifies for the Annual Academy Awards®.

Jury Honorable Mention for Cinematography - Documentary Short: THE BULLET, dir. by Jordan Bahat, cinematography by Mike Gioulakis
"Beautiful cinematography offering a peek into a profession most of us would never consider. And who doesn't love the circus?"

Audience Award for Narrative Feature: HONEY BUDDIES (TENTATIVE), dir. by Alex Simmons
When David is dumped just days before his wedding, Flula, his upbeat and very German best man, convinces him to go on David's honeymoon together: a seven-day backpacking trip through the Oregon wilderness. On the trail, the two friends meet a conspiracy theorist, a friendly backpacker, and a bloodthirsty predator, on an unrelenting trek that tests their friendship and their lives.

Audience Award for Documentary Feature: THE MILLION DOLLAR DUCK (TENTATIVE), dir. by Brian Golden Davis
The Million Dollar Duck dives into the wonderfully eccentric world of the Federal Duck Stamp Contest, the only juried art competition run by the U.S. government. The Duck Stamp is among the most successful conservation tools ever created, spawning a uniquely American subculture brimming with talent, big money, and migratory birds. The film follows the artists who competitively paint waterfowl in their obsessive quests to win the "Olympics of wildlife art."

The below Short Film Jury Prizes were selected by the esteemed panel of industry members Steve Montal, Ina Pira, and Mark Shapiro.

Jury Award for Narrative Short: WINTER HYMNS, dir. by Dusty Mancinelli
"A story where innocence, mischief and brazen confidence abruptly meet at a tragic crossroads. There is beauty and sadness here, and the director handles both with natural, unpretentious skill."
The award winner qualifies for the Annual Academy Awards®.

Jury Honorable Mention for Narrative Short: THE BEAST, dir. by Daina Oniunas Pusic
"The Beast, produced in Croatia, portrays the strained and codependent relationship of two aging women. It is a sophisticated and elegant portrayal of anger and despair."

Jury Honorable Mention for Animation Short: FLAWS, dir. by Josh Shaffner
"Flaws brilliantly portrays the trajectory of life and death within a world of helplessness. It beautifully interlaces images, icons, words and music to deliver a powerful piece of thought-provoking cinema in under three minutes."

Jury Award for Experimental Short: INFRASTRUCTURES, dir. by Aurèle Ferrier
"A pensive and serene vision that challenges the audience to consider and reevaluate not just the structure of film, but also the world in which we live."

Jury Honorable Mention for Experimental Short: CUP OF STARS, dir. by Ryan Betschart, Tyler Betschart
"The beauty of the mutable universe and the individual; finding the transcendent in the everyday."

Jury Award for Anarchy Short: DISCO INFERNO, dir. by Alice Waddington
"An emerging voice with a powerful aesthetic that pays homage to classic cinema while simultaneously affirming a future for visionary film."

Jury Honorable Mention for Anarchy Short: HI HOW ARE YOU DANIEL JOHNSTON? dir. by Gabriel Sunday
"A dream meditation on music creativity, mental health, and lost love. A poignant journey into the psyche of the creative mind."

To continue following the Festival, join us for the ArcLight Presents Slamdance Cinema Club screening of DIRECTOR'S CUT at the ArcLight Hollywood February 2nd at 8pm followed by a filmmaker Q&A with director Adam Rifkin and Penn & Teller, and Slamdance Studios on Hulu will premiere CRIMES AGAINST HUMANITY on February 3rd. This year's films that sold out of Festival that audiences will be seeing globally include: FURSONAS (Gravitas Ventures), THE MILLION DOLLAR DUCK (Animal Planet/Discovery and Lionsgate).

Do you feel this content is inappropriate or infringes upon your rights? Click here to report it, or see our DMCA policy.
driftwoodhunky dorySlamdance 2016the million dollar duck