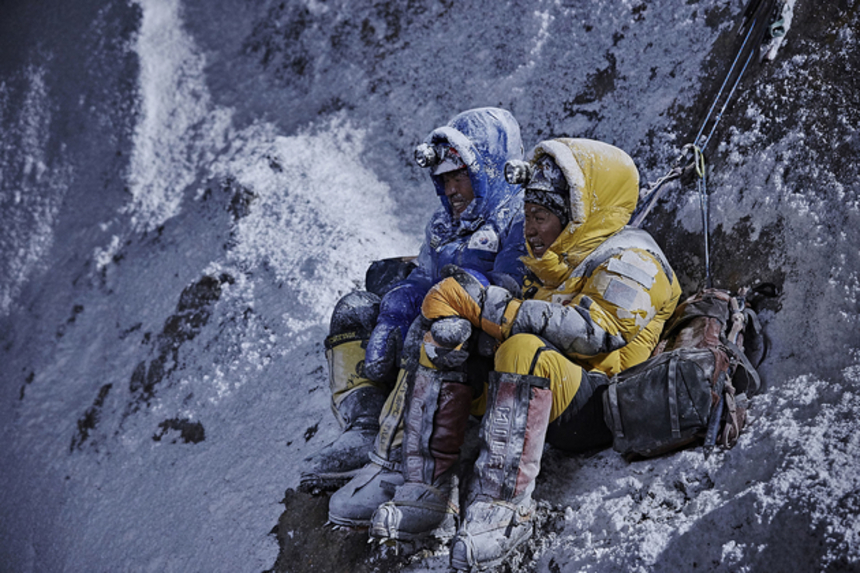 For those looking for an expedition drama, be warned that despite its title, The Himalayas is first and foremost a melodrama. One concerning brotherhood, family and, above all, coping with grief. Himalayan expedition films seem to be in vogue at the moment, with 2015 already yielding Baltasar Kormákur's Everest and Japanese drama Everest: The Summit of the Gods due out in a few months, but Lee Suk-hoon's picture is more concerned with relationships than it is with the technicalities of mountaineering.

Perhaps Korea's most famous climber, Um Hong-gil (Hwang Jung-min) led many expeditions in the Andes and the Himalayas before meeting younger climber Park Moo-taek (Jung Woo). They form a bound during a perilous ascent of Kangchenjunga (Nepal/India), the third highest peak in the world, but a few years later Um injures his ankle and contains his activities (which include writing a book) to Korea. However, when Park Moo-taek disappears during an expedition up Mount Everest, Um leads another treck up the peak to retrieve the body.

The bond between these two men is what drives Lee's film, but it does so to a fault as the exigencies of high altitude climbing are largely glossed over. Even layman climbers may roll their eyes at the sight of a dozen of so hiking protagonists never needing any oxygen in the highest reaches of Nepal. Others may notice that the two leads seal their bond at the very peak of Kangchunjunga, an area which climbers have to this day left inviolate, in order to respect the wishes of the monarchs of the former Sikkim and Ladakh kingdoms. While these details may not affect the story a great deal, they add to the film's highly calculated desire to steer audience attention to the emotional tangents of the characters and away from the details of their treks.

What Lee and blockbuster producer JK Youn (director of Ode to My Father) really want us to focus on is how people deal with loss in extreme circumstances. The Himalayas goes to great lengths setting up how a friendship develops and then how one friend reacts at the other's passing. To say the least, it is unusual for mountaineers to go on a search and rescue mission for a body on Mount Everest, rather than someone who might still be alive. It's a uniquely Korean spin on the genre, given the country's relationship with death, yet also one that robs the narrative of dramatic urgency.

Grief affects people in different ways and each culture has their own rituals for coping with it. In Korea, people may not always show their true emotions, but when faced with loss, the same decorum doesn't apply. A powerful and common image in Korean films is that of mourners at a funeral. Tears flow faster than liquor, heart-wrenching wails carry through the air and those left behind often fall to the ground, unable to hold themselves up. This kind of behavior marks much of The Himalayas, turning it into a uniquely Korean version of an expedition drama, but, as the tears begin to outnumber the snowflakes and what might be a melodramatic coda somewhere else occupies almost an hour of screen time here, the strong focus on the aftermath of death brings a massive emotional imbalance to the story.

Following lead roles in Ode to My Father and Veteran, now the second and third highest-grossing Korean films of all time, Hwang Jung-min proves his mettle once again as the Korean middle-aged everyman who tries his best to look out for other people. Yet there's only so much sobbing a performance can handle before it begins to lose its effect, and sadly Hwang seems to have been directed over that line in this outing. As his fallen comrade, Jung Woo tries his damnedest to be affable, but much like his leading turn in this year's music biopic C'est si bon, it's a strained performance that relies on wide grins and broad gestures.

Technically the film is on par for a large-scale Korean production, so slick lensing and editing can be expected, but it doesn't quite pop the way other films from the country have this year. Director Lee will be hoping to attract a similar crowd that came out for his swashbuckling hit The Pirates from last summer but appreciation of his latest will depend largely on viewers' tolerance for histrionics. Also disappointing is the casting of heavily made-up Koreans as the Nepalese sherpas guiding the climbers.