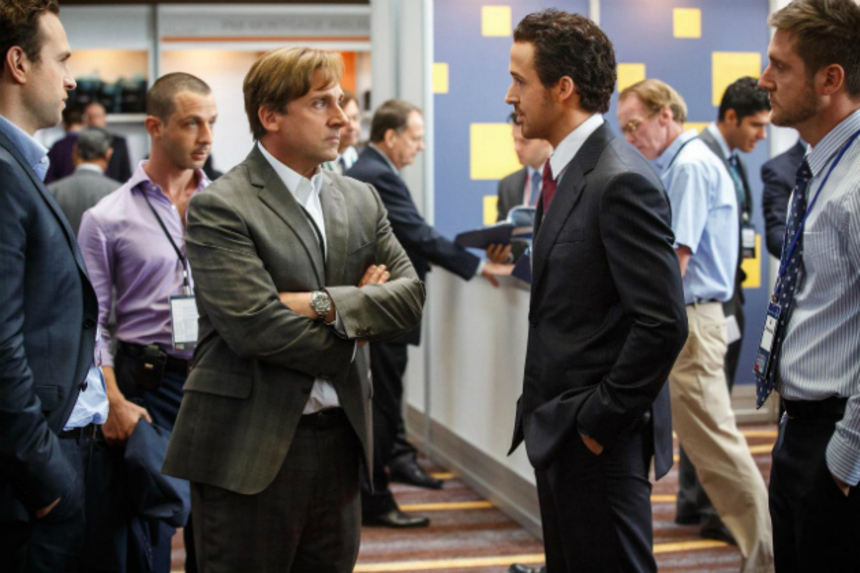 Adam McKay's The Big Short quickly and stridently establishes a superior, condescending tone as it aims to mythologize a few men who were smart enough to recognize that a huge downturn in the housing mortgage market was looming in the period before September 2008, and endeavored to profit greatly from it. Bully for you, fellas!

Adapted from the non-fiction book by Michael Lewis, The Big Short attempts to wise-ass its way into hearts by introducing the supremely self-confident Ryan Gosling as one of the brilliant gentlemen who were way ahead of the curve. His character smashes the fourth wall almost immediately, thereafter serving as narrator and guide to the world of high finance, a world filled with arcane terminology meant to obfuscate the criminal activity that was really going on in the fine print.

Really, the banking and financial industries are no different than any other field when it comes to having specialized vocabularies that mean nothing to anyone not intimately involved with the work. They are, however, more arrogant about it than others, and their immoral and possibly illegal misdeeds threatened the world's economy.

The Big Short follows the simultaneous stories of these men as they realize goldmines await if they act boldly, largely with other people's money. In effect, they are gambling that every financial institution that has gambled on the home mortgage market continuing to rise and rise and rise will, eventually, fail.

Christian Bale and Steve Carell separately run investment funds, and Ryan Gosling works for a large bank. Brad Pitt portrays a retired and disgusted financial genius who enters the picture at the behest of two smaller players, Finn Wittrock and John Magaro; they figure things out early on but need help to make the big investments. These men are lesser villains than the huge banks and investment firms that created the crisis in the first place but, legal as their activity may have been, they are still opportunists, akin to companies that profit by manufacturing and selling weapons of war. They make some effort to warn fellow investors and notify the proper authorities, but when they are ignored or minimized, they shrug their shoulders, in effect, and collect millions of dollars when things turn sour for the rest of the world.

Hey, somebody's gotta profit from disaster, and it might as well be these guys. The Big Short aims to indict an industry that has walked away scot-free from their crimes -- it's no spoiler to say that only one person associated with the 2008 disaster has gone to jail for his illegal activities -- and continues to hoodwink politicians and the common man. 'Too big to fail,' indeed.

As a movie, The Big Short plays like a docu-drama, stopping to explain itself as the story develops, either with characters turning to the camera to comment on the action or with celebrities appearing as themselves to explain what's happening for the layman. (McKay and Charles Randolph are credited for the screenplay.) This smarmy approach quickly gets under the skin, but it's a legitimate method of storytelling and it succeeds in creating a sense of outrage.

The performances certainly help. Carell stands out as the combative Mark Baum, who brooks no nonsense and always speaks his mind. Bale, Gosling and Pitt do their best to downplay their classic leading-man looks and disappear into their characters. Wittrock and Magaro are the most appealing, in part because they're playing investors who work out of their garage and manifest a 'gee-whiz' attitude even as they break their backs to make money.

McKay is known for his 'dumb guy' comedies like Anchorman and Step Brothers. Of course, you've got to be smart to make movies like that, and McKay demonstrates his filmmaking craft by turning a financial tragedy into mainstream entertainment, albeit one that often wavers in tone as it endeavors to lecture and enlighten.

It's safe to say that all those involved in The Big Short also want to infuriate viewers. There are no heroes in the movie; the best of them feel bad for the chumps who lost their savings and their jobs and their homes and saw their lives destroyed by a rapacious crowd of faceless monsters who still walk the streets, counting their money, secure in the knowledge that they cheated millions of people and yet suffered no legal consequences.

The Big Short opens in select theaters in the U.S. on Friday, December 11, before expanding nationwide on Wednesday, December 23. Visit the official site for more information.