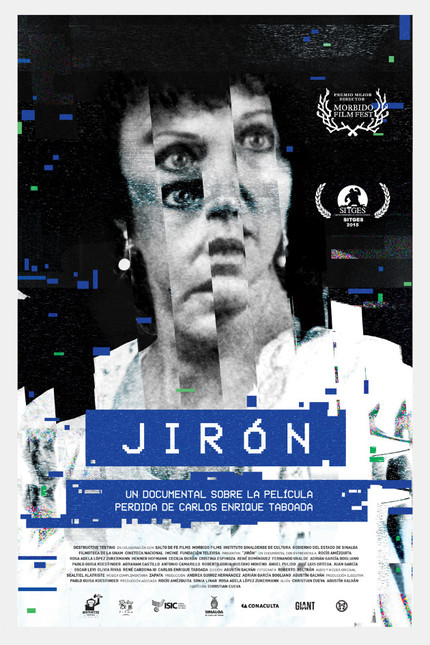 Last year I was very happy to see Jirón (Shred), a new documentary by Christian Cueva about Mexican filmmaker Carlos Enrique Taboada. It tells the story of his final film, which disappeared before anyone had a chance to see it. Now Mexico City will get to see Jirón, as it will make its local debut this Saturday, December 26.

To celebrate, we are happy to debut a brand new poster. Here's what I wrote, in part, about the movie in my review:

"As the 'making of' story of Jirón de niebla is told, director Cueva unfolds the history of Taboada's career, cutting back and forth from the two main narratives, each thread shedding light on the other, along with a third strand that follows a trip to the main film archive in Mexico, in search of the director's films. As an archivist searches for the 35mm reels, I couldn't help but feel a touch of despair, not only that Taboada's final film may have disappeared forever, but that a masterful work of horror might be missing in the world. Who knows, maybe it didn't turn out as well as seemingly everyone connected with the project wishes. But maybe it did."

Cueva's movie stands as a striking piece of work that has only received scant festival play in the past year, which is a shame in itself since it's both important and compelling viewing, and essential for fans of horror cinema. But if you're in Mexico City, this is your chance.

Here is some official verbiage about the event and the film:

Held at the Cineteca Nacional, Masacre en Xoco began six years ago as a tribute to 35 mm film format, and imminent death of film seems to be already writing our epitaph. To be or remain?

The anticipated documentary film about the lost Carlos Enrique Taboada's film Shred of Mist will screen for the first time in Mexico City this December 26th at 18:30.

This documentary tells the story of Shred of Mist, the last movie filmed by the Mexican Duke of terror, Carlos Enrique Taboada, that for various reasons was never seen or released. The mystery behind the disappearance of this film will be revealed through a series of interviews with people who worked on the film's shooting.

Do you feel this content is inappropriate or infringes upon your rights? Click here to report it, or see our DMCA policy.
Adrian Garcia BoglianoCarlos Enrique TaboadaChristian Cueva Pablo Guisadocumentary