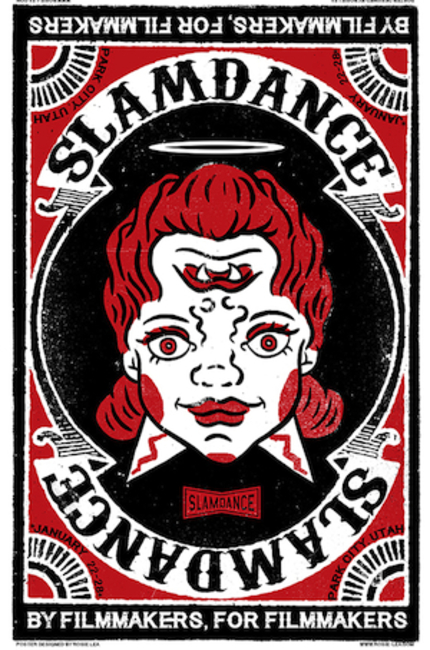 It's the same everywhere, with everything: The end of one calendar year brings about news of next year's events, goings on, happenings... film festivals. Oh. Hey now...

Today, the full feature documentary and narrative competition lineup for the 22nd Annual Slamdance Film Festival was announced. Per their competition rule, these are all first time feature directors: the best of what's next. Among the 20 titles are 16 premieres, including 12 world premieres.

A few narraitve titles I'm taking note of right now include DIY political thriller If There's A Hell Below. Slamdance, being the kings of lo-fi that they are, generally have a few outta-da-blue titles. Last year the grand champ was the terrifying They Look Like People, which went on to rave reviews and fest awards aplenty. Fingers crossed on Nathan Williams' debut. Another one to pique my interest is Paul Taylor's Driftwood, a dialog-free film about a young woman and her captive. Taylor's debut stars Joslyn Jensen, who gained attention on the indie stage for the Slamdance Jury winning Without, still my favorite unreleased indie of the last decade.

Ruth Platt's The Lesson is being described as a horror film centering on a high school teacher and his students. For that pitch alone, our hardcore readers should keep an eye on that one. Finally, it's rare that a title and premise can sell me on a flick, but Pedro Severien's All The Colors Of The Night has done just that with its evocative title and succinct and surreal "wake up to a body" premise.

But that's just the tip of the iceberg. Check out the full lineup below, and come January 22nd, keep an eye out for my coverage of the 22nd Annual Slamdance Film Festival in Park City, Utah.

(LOS ANGELES, CA - November 30, 2015) The Slamdance Film Festival today announced their Narrative and Documentary Feature Film Competition programs for its 22nd Festival edition. As the premiere film festival by filmmakers for filmmakers, Slamdance's showcase of emerging artists includes 12 narrative and 8 documentary films. This 20-feature film competition includes 16 premieres - 12 World, 3 North American, and 1 US premieres. Slamdance is proud to present the best of first-time feature filmmakers pushing the boundaries of filmmaking with innovation and unique talent. All competition films are feature film directorial debuts with budgets of less than $1 million and without US distribution. All films were programmed entirely from blind submissions by the Slamdance filmmaking community.

Jury Awards are presented to feature films in both categories and all films are eligible for Audience Awards as well as the Spirit of Slamdance Award, judged by the filmmakers themselves.

"The standard of DIY filmmaking around the world is the highest we've seen, and the diversity of storytelling is the most we've experienced. With a record breaking number of submissions to select from, the narrative and documentary feature line-up has never been so competitive or as exciting to program." states Co-founder and President, Peter Baxter.

All the Colors of the Night  - Director: Pedro Severien; Screenwriter: Luiz Otávio Pereira
(Brazil)
Iris wakes up in her spacious seafront apartment, discovers a body in the living room and enlists the help of other women, setting off a spiral of redemption in an atmospheric drama of dark imagery and questionable reality.
Cast: Sabrina Greve, Sandra Possani, Brenda Ligia, Giovanna Simões, Rômulo Braga

MAD - Director & Screenwriter: Robert G. Putka
(USA) World Premiere
A matriarch past the point of a nervous breakdown, her two daughters that don't give a damn, and the heat-seeking missiles of resentment they toss at each other create a lively backdrop for this dark and dramatic comedy.
Cast: Jennifer Lafleur, Maryann Plunkett, Eilis Cahill, Mark Reeb, David Sullivan, Conor Casey, Shaun Weiss, Chris Doubek

Neptune - Director: Derek Kimball; Screenwriters: Derek Kimball, Matthew Konkel
(USA)
Set in the late 1980s on an island off the coast of Maine, an orphan girl raised by the church becomes obsessed by the disappearance of a classmate, and her haunted dreams and visions propel her to push past her sheltered life.
Cast: Jane Ackermann, Tony Reilly, William McDonough III, Christine Louise Marshall, Dylan Chestnutt, Maureen Butler

1ha 43a - Director & Screenwriter: Monika Pirch
(Germany) North American Premiere
After inheriting a plot of farming land near Dusseldorf, Monika explores the potential of her field through administrative, historic and poetic methods and manages to reconnect with the land and her ancestry in a beautiful and unexpected way.

Fursonas - Director & Screenwriter: Dominic Rodriguez
(USA) World Premiere
Like any community, the Furry world is one with gossipers, dreamers, followers, whistleblowers and the one guy who wants to rule them all.

Film stills are available for press use only and can be downloaded below.

About Slamdance
Slamdance is a community, a year-round experience, and a statement. Established by a wild bunch of filmmakers in 1995 who were tired of relying on a large oblique system to showcase their work, Slamdance is an ongoing experiment that has proven, year after year, when it comes to recognizing talent and launching careers, the independent and grassroots communities can do it themselves.

Slamdance alums are responsible for the programming and organization of the following year's festival. With a variety of backgrounds, interests, and talents, but with no individual filmmaker's vote meaning more than another's, Slamdance's programming and organizing committees have been able to stay close to the heart of low budget and do-it-yourself filmmaking. In this way, Slamdance continues to grow and exemplify its mantra: By Filmmakers, For Filmmakers.

In addition to the festival, Slamdance serves emerging artists and a growing audience with several year-round activities. These include the popular Slamdance Screenplay Competition, traveling On The Road screening events, the Anarchy Workshop for student filmmakers, and The ArcLight Presents Slamdance Cinema Club, a monthly cinema club partnership with ArcLight Cinemas based out of the ArcLight Hollywood, with two screenings and filmmaker Q&A's each month at: https://www.arclightcinemas.com/en/news/arclight-presents-slamdance-cinema-club

In January 2015, Hulu partnered with Slamdance Studios to offer a new film collection from festival alumni. The nascent but already profitable venture allows viewers to access Slamdance Studios on Hulu at: http://www.hulu.com/companies/slamdance

In November, 2015, Slamdance announced DIG, a new digital, interactive and gaming showcase dedicated to emerging independent artists working in hybrid, immersive and developing forms of digital media art. Ten works will feature in the inaugural DIG show that will open in Los Angeles at Big Pictures Los Angeles on December 5th and run through December 13th, 2015. Admission is free and open to the public. The show will also be featured at the 2016 Slamdance Film Festival.

The 2016 Slamdance Film Festival will take place January 22nd - 28th in Park City, Utah. Additional information about the Slamdance is available at www.slamdance.com

Do you feel this content is inappropriate or infringes upon your rights? Click here to report it, or see our DMCA policy.
all the colors of the nightdiy filmmakingdriftwoodif there's a hell belownathan williamspaul taylorpedro severinruth plattslamdance 2016slamdance film festivalthe lesson