Review: VICTOR FRANKENSTEIN, Watch This Before Creating A Monster 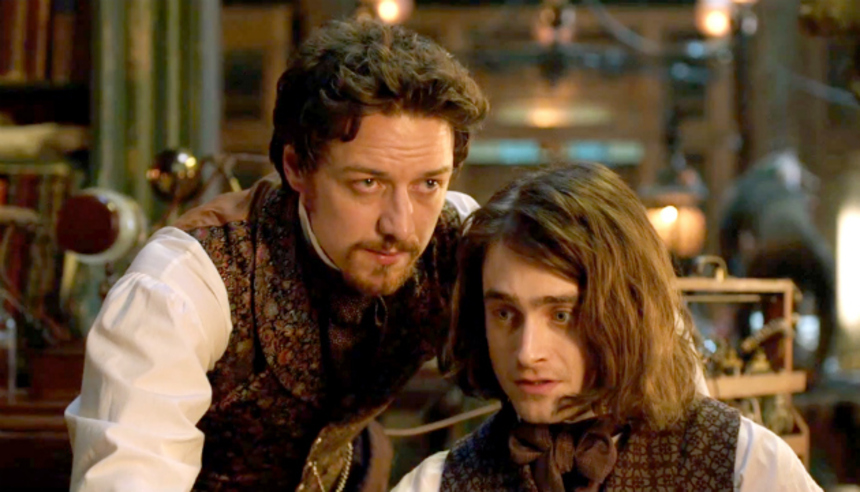 On the face of it, the idea of making Igor the hero is ridiculous. Since James Whale's famed adaptation of the source material in 1931, Dr. Frankenstein's assistant has been portrayed as a hunchbacked man, in my mind most memorably played by Marty Feldman in Mel Brooks' Young Frankenstein. In fact, the character does not appear in Shelley's novel, and so writer Max Landis -- properly credited for both screen story and screenplay -- conjures up a nameless, severely hunchbacked man who has been raised in a circus in the latter part of the 19th century.

The man (Daniel Radcliffe), despite being treated harshly by his rough-hewn circus mates, inhabits his role as clown without complaint, even as he studies medicine in his free time and nurses a lifelong crush on graceful acrobat Lorelai (Jessica Brown Findlay). An accident brings the pitiable creature together with medical student Victor Frankenstein (James McAvoy), who is visiting the circus for nefarious reasons, and the hunchback finds himself recruited for a new purpose in life.

The newly-christened Igor is soon set physically upright by Frankenstein, and is engaged to help in the medical student's secretive experiments. Finally granted a measure of respect, and treated in a humane if abrupt manner, Igor is eager to apply the knowledge he has gained about human anatomy to create something altogether new. Of course, film fans have likely seen dozens of variations on Frankenstein; or the Modern Prometheus, but while the overall trajectory of the story is familiar, Landis' treatment presents a fresh angle. If anything, Victor Frankenstein is too ambitious, introducing more characters than can be properly developed in the running time.

Lorelai becomes a love interest for Igor, yet she also raises questions about Frankenstein tampering with what she views as the divine nature of life, questions that are duplicated when asked by Scotland Yard Inspector Turpin (Andrew Scott), a probing figure who initially exists to throw a monkey wrench into the proceedings, only revealing his religious objections later. There's also a wealthy patron, an unexpected visit by a family member, and more than one monster to stomp around.

Paul McGuigan directs with a sure hand, aided and abetted by director of photography Fabian Wagner, editors Andrew Hume and Charlie Phillips, and a marvelous production design by Eve Stewart. Yes, computer graphics are used to recreate London of the time, but it's lovely to see practical effects at the forefront. Lately, director McGuigan has been helming television shows, notably four episodes of Sherlock, and Victor Frankenstein features a pace that is similarly frantic, though never out of control, and that helps the movie push through its sillier aspects.

Victor Frankenstein plays like a genre movie from the classic Hammer era, taking its subject matter seriously, yet still having a good time as it delivers the modern-day action excesses that are expected. (I especially enjoyed one in which circus performers utilized their specialties to try and foil an escape attempt.)

At the heart of it all, Daniel Radcliffe shines as a distinctive character who is learning how to do the right thing. He's a good example for anyone who contemplates mucking about with life and death.