Review: SPOTLIGHT, A True Story Proves Both Enthralling And Appalling 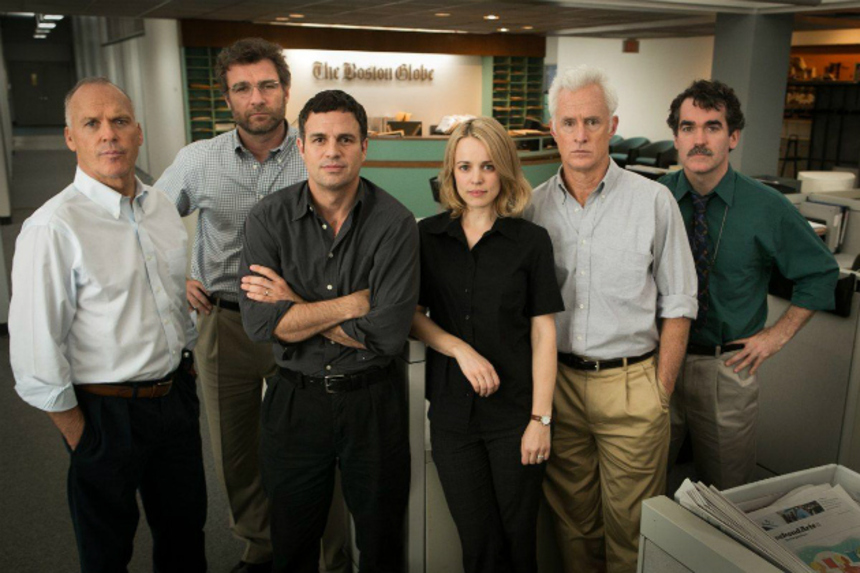 Consistently gripping, Tom McCarthy's Spotlight tells the true story of an investigation by the Boston Globe newspaper that had far-ranging implications. The film serves as a tribute to the power of the press, as well as a warning sign for the future of journalism in the public interest.

Actor turned filmmaker McCarthy made a trio of impressive character pieces (The Station Agent, The Visitor, Win Win) before stumbling with the Adam Sandler-starring The Cobbler, a good-faith attempt to make something lighter and carefree. But he returns to his strengths with this picture.

Spotlight neither glamorizes nor demonizes the press. It includes the shining moments yes, but also the mistakes that are inevitably made in the pursuit of truth. The focus here is on four investigative journalists who are the 'Spotlight' team. They are very, very bright and probing, with good instincts for sniffing out a story, and they are also quite experienced.

Their intelligence, modesty, and generally good judgment is demonstrated time and time again, yet never trumpeted; McCarthy and his co-writer Josh Singer simply present their actions as a consequence of their personality traits along with extensive training. These are people who are good at their job, employees who have earned a degree of latitude, and never abuse it. They arrive early and stay late, not to impress anyone, but because there is so much to be done. They argue, they joke, they commiserate, and they fight. They are, through it all, mature adults; they know that reasonable people may not always agree, and may engage in heated arguments, but they don't allow that to break up their otherwise collegial relationships. They are played by actors who are known for their starring roles. Here, however they merge into a seamless ensemble of passionate and engaged journalists, reporters and editors who do not much care how they look. The 'Spotlight' team is led by editor and reporter Walter 'Robby' Robinson (Michael Keaton), who takes charge quietly and with authority and respect.

The investigation takes months because they want to get it right. Though the financial implications for the newspaper are alluded to, they are kept in the background. Yet in real life, the paper recently laid off a number of employees, and by now we all know that newspapers are in dire straits. Some of this can be attributed to print publications' own short-sighted view of the internet, and some of it can be blamed on advertisers who don't want to spend as much money anymore on journalistic endeavors.

Yet when it comes to stories such as this, who else will spend the time and money to dig so deeply? Who will be around to edit the stories, to guide the team, to offer cautions to avoid presenting only one side? Those questions are outside the purview of the movie, but it's impossible not to think about, and dread, the possible answers.

The story remains a shocking revelation, and the telling of it in Spotlight is extraordinarily good. It is both enthralling and appalling to watch it unfold, which helps make the movie an essential experience.

Spotlight is now playing in select cities in the U.S. It will continue to expand across the country in the coming weeks.

Do you feel this content is inappropriate or infringes upon your rights? Click here to report it, or see our DMCA policy.
John SlatteryLiev SchreiberMark RuffaloMichael KeatonRachel McAdamsTom McCarthy