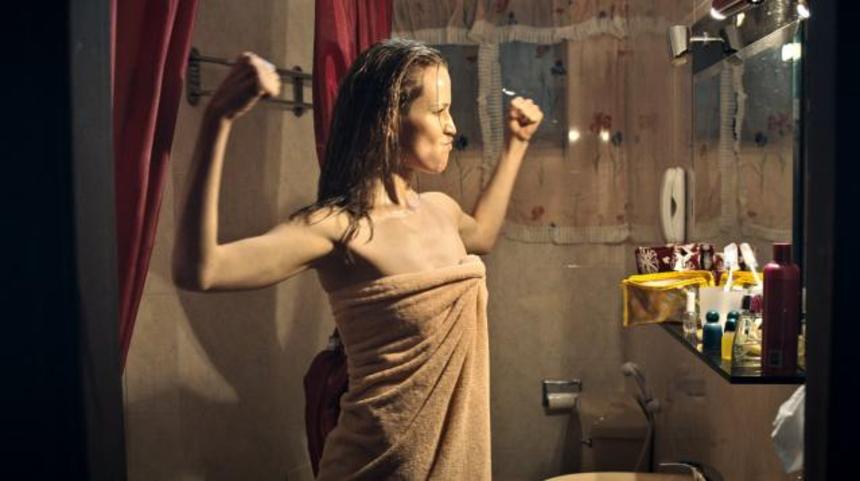 War correspondants can be mythic figures, something of romantic heroes. They go to dangerous places in order to bring us the truth. It's been said that it was the reporter's stories that helped begin protests against the Vietnam War; although today, with many reporters embedded with troups, sometimes what we hear about is not everything. In Barbara Eder's latest fiction feature, Thank You For Bombing, the situations of three different journalists involved in the conflict in Afghanistan give us interesting and often uncomfortable insights into their jobs and journalism on the front lines.

Thank You For Bombing consists of three stories of different journalists. In the first, a veteran correspondant from Austria, Bendl, is asked by his editor to go to Kabul. At the airport, he believes he has found a man responsible for a massacre in Kosovo, and sets out to have him arrested. In the second, a young American journalist, Lana, tries to prove herself in a country (Afghanistan) and industry that has little respect for women. In the third, a brash male journalist Cal (also in Afghanistan), is bored waiting for the war to start and tries to make a story, to deadly consequences.

In each story, we are placed in the proverbial shoes of the journalist, so that we understand each perspective. With Bendl, it is his PTSD; he may or may not have the right man, but the trauma endured has made him deadened his perception into paranoia. For Lana, it is struggling to fight against not only sexism inherent in journalism, but misogyny in Afghani culture; how can her boss send her into the field when she is attacked by locals? For Cal, it is the machismo desire to constantly be in the action, no matter who around him gets hurt.

While in each we are seeing the story from their perspective, it isn't always successful. It is somewhat in the first, with Bendl, though it is a bit of a slow start (but perhaps this is deliberate). His PTSD does lend him greta sympathy, and his actions might be something we could see ourselves attempting, but it is somewhat anticlimactic, though it does show clearly how, at least in the mainstream news, if it isn't the current war, no one cares.

Cal is not someone to whom I could see much of the audience feeling sympathy or empathy for, even as his life unravels around him; he's too arrogant and calous. But then, that is possibly the point, as he is the most generic representative of the war reporter: young-ish, white male, arrogant enough to get his way, somewhat vulnerable. His treatment both of his fellow journalists and the locals with whom he interacts is what we probably expect of most war reporters (whether or not it is true).

The second story is the most powerful, and arguably the one that most spectators will find intriguing and disturbing. Not only from the perspective of Lana, as a woman operating in a profession dominated by men, in a country where women are little more than chattel, but also as an indictment of the US military. We are aware of the lengths to which the military will go to protect their own, but how far, and how women are used and abused in situations where they are viewed are powerless, is presented in one of the most powerful and terrifying scenes I've seen in such a drama in a long time. It is not for the faint of heart.

Indeed, what Eder is trying to convey, is that western war reporters, despite good intentions, are not necessarily making the situation better. Not that this is their job, of course, their job is to report on the facts. But what are those facts, and how are they reported? Taking a naturalistic shooting approach, Eder does not necessarily manipulate, but she does ask her audience to look critically upon how we view the news, and how it is presented, and to what extent we, as spectators in the west, are, at least in part, resonsible for what news is given, and how.

Thank You for Bombing

Do you feel this content is inappropriate or infringes upon your rights? Click here to report it, or see our DMCA policy.
Barbara EderBlack Nights 2015Thank You For BombingThomas PridnigErwin SteinhauerManon KahleRaphael von BargenChristopher AmmannDramaWar