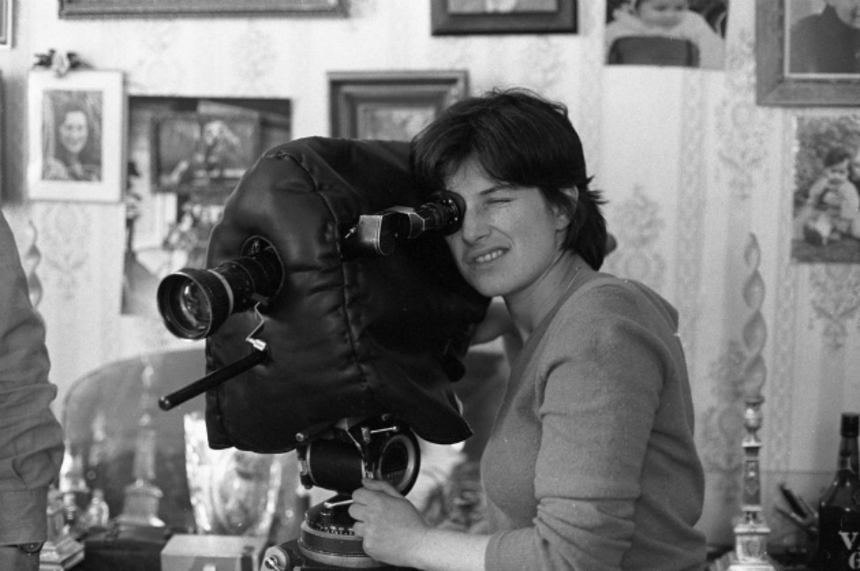 Belgian filmmaker Chantal Akerman has reportedly passed away in her home in Paris at the age of 65, according to multiple news sources. Akerman was at the forefront of the avant-garde film movement in Europe in the 1970s, pushing the boundaries between fiction and autobiography and exploring space and place within film. Her final film, No Home Movie, screened at the Toronto International Film Festival just last month.

Akerman was born and raised in in a Jewish family in Brussels; her mother was the only member of her family to survive the Holocaust, and this would have a profound effect on Akerman and her work. She went to film school at 18, but soon dropped out to make her first short, Saute ma ville. After spending a few years in New York, she returned to Europe and made her first feature, Hotel Monterey, and the shorts La Chambre 1 and La Chambre 2. It is in these films that her style begins to emerge more fully formed, with long takes and the repetition of seemingly ordinary tasks.

Her next feature, which she made at the age of 24, Jeanne Dielman, 23 Quai du Commerce, 1080 Bruxelles (1975) is widely considered to be her best work and a masterpiece of the new feminist cinema. At more than three hours, it follows a housewife as she goes through her daily routine, which includes both domestic chores and prostitution. And while she identified as queer, she never characterized herself as a queer filmmaker. The one exception might be her 1976 film Je, tu, il, elle, in which Akerman herself plays a woman who visits a former lover. The two women have passionate sex in a unique long take, and this being Akerman, it moves away from the fetishization of the female body normally found in such scenes.

Akerman came of age in the era of second wave feminism, and her films reflect on the search for the female voice in film, both in front of and behind the camera. For Akerman, it was not so much about the stories the films told, but how they were told, and how her camera captured the female experience that would best convey a woman's life. For her, the lives of women were not ordinary; it was how they were portrayed that kept them from the forefront of cinema.

Always one to try something new, she made a musical, Golden Eightes (1986), and Demain on déménage (2004), a screwball comedy. She also moved into documentary filmmaking, including D'Est (1993), which looked at Eastern Europe after the fall of communism, and La-bas (2006), in which she visits Israel for the first time as the child of a Holocaust survivor.

I was fortunate to see No Home Movie at TIFF. It is a documentary in which she films her mother going about her day in her small apartment. While mostly ordinary conversations, Akerman draws out her mother's experiences of childhood, the war, and memories that some might not be able to handle. It was a very moving film, articulating much of what is often left unsaid between a parent and child about a terrible trauma.

I've posted below the video of her short Saute ma ville, and I hope readers unfamiliar with her work will seek it out. Akerman was an incredible and truly unique voice in cinema.
Tweet Post Submit