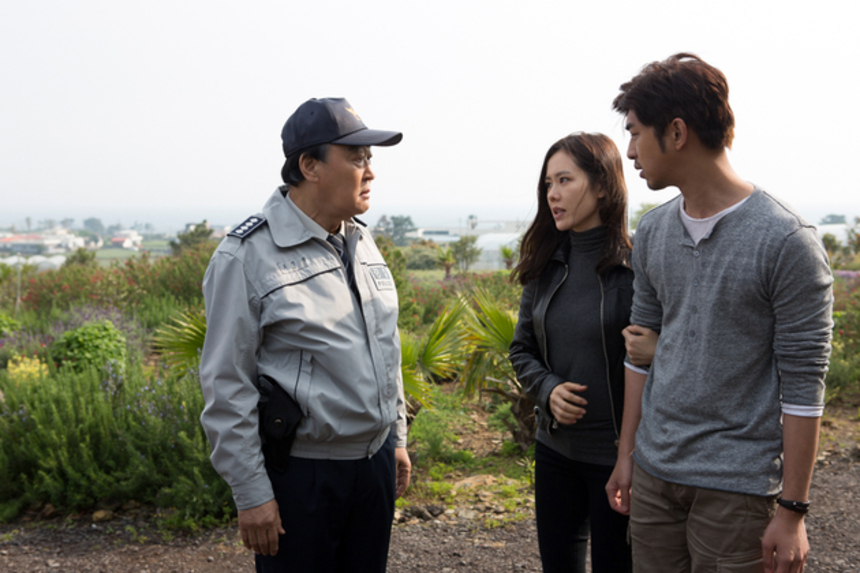 One of the more high profile among the many China-Korea collaborations being made these days, Bad Guys Always Die teams Taiwanese star Chen Bolin with top Korean actress Son Ye-jin in an action-comedy (leaning more towards the later) set on Jeju Island, an extremely popular holiday spot for both Koreans and Chinese tourists.

A Chinese teacher living in Busan named Chang Tzu goes to Jeju Island for a trip with his brother and their two friends. However, things go awry after they witness a car crash. They try to help the unconscious woman they find in the car, but when they are pulled over by a cop, they are stunned when she wakes up, shoots him and takes all of them hostage. Following that, events become only more complicated for all involved.

Son takes on another action role in the wake of the success of the period swashbuckler The Pirates, but fares no better here in a performance that is all cold stares and no depth. Granted, the thin characterization afforded by the script doesn't exactly give her much to work with. It's a listless turn that feels by the numbers in execution, and sadly she isn't the only performer afflicted with this ailment here as most of her co-stars suffer the same fate, from a vaguely pleasant but insignificant role for Bolin to a sleepy performance by Shin Hyeon-jun as the villain of the piece.

Though trading mostly on comedy (much of it slapstick), the gags generally fall flat in the hands of a cast that is short on good comic timing, but also from a limp mise-en-scene that more often than not seeks to play up Jeju Island as if the whole affair were a glorified tourism ad. Characters frequently mingle in top class hotels and spas, or are made to walk through the island's beautiful prairies in the becoming early spring weather.

Bad Guys Always Die tries hard to emulate a Hollywood-style action-comedy gloss, but the vistas and framing do little more than highlight the emptiness of the proceedings taking place on screen. From a writing perspective, the script offers a flimsy story that never even threatens to go anywhere interesting. Maddeningly, the simple affair is stretched over a paralyzing 114 minutes and the action quotient of the production is almost non-existent.

Throw in some rather big leaps in logic and an inert Mexican standoff finale, and this high profile co-production, from debut Chinese director Sun Hao and veteran producers Feng Xiaogang and Kang Je-gyu (directors of Aftershock and Taegukgi: Brotherhood of War, respectively), sadly has little to offer.