Review: THE TRANSPORTER REFUELED, Still Out Of Gas 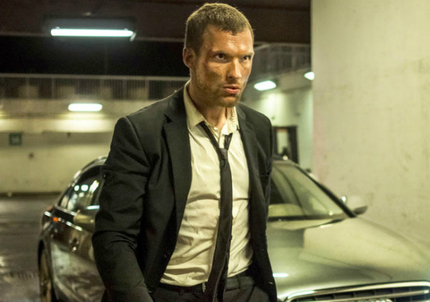 The newest model in the Transporter series is much the same as the previous versions, only with less wit and less cohesive action sequences.

Not that the first three films were exactly paradigms of wit and cohesive action. Back in 2002, however, The Transporter felt relatively fresh, welding together Corey Yuen's action choreography with Luc Besson's European cool -- plus Shu Qi! Plus a befuddled François Berléand! -- to create a genuinely entertaining, international genre picture. As with many sequels, a downward trend became evident in subsequent installments, and the series appeared dead after it spawned a television spinoff.

It's hard to find good getaway drivers, though, and the franchise has been reborn. With Jason Statham's exit, Ed Skrein (the erstwhile Daario Naharis from Game of Thrones) has been fitted for a new black suit, white shirt, black tie, sunglasses, and a suitable amount of stubble. After a brief prologue set in 1995, the movie jumps forward to 2010, or, two years after Transporter 3, yet somehow featuring a younger Frank Martin.

To replace François Berléand's older comic sidekick role in the earlier movies. Frank's father, also named Frank but played by Ray Stevenson, shows up on his first day of retirement. Frank Senior has never told his son that he was an espionage agent, but Junior is pretty smart, so he can't be terribly surprised when the old man is kidnapped as a means of forcing Junior to accept a dangerous mission from Anna (Loan Chabanol). That might make sense, except it's on the heels of another dangerous driving job he's already accepted -- and completed -- from Anna, who, together with her three like-heighted and similarly-dressed friends, has pulled off a bank heist that leads to a mad getaway through the streets of a glamorous European city. In any event, the new mission involves revenge against an evil Russian (Radivoje Bukvic), who took over the prostitution ring in which the women were involved back in 1995.

Ideally, the action sequences would rescue the movie from the plot contrivances. While the fighting and the car-bashing and the stunts are energetic -- the scene in which Frank Junior lifts the emergency brake and lets the car roll so he can jump out of the car to fight the bad guys while the women scream in panic is ripe for duplication -- the 200 kilometers per hour editing makes them well-nigh incomprehensible. For the record, Laurent Demianoff (Lucy) served as stunt coordinator, Alain Figlarz as fight choreorapher, and Michel Julienne as car stunt coordinator.

Skrein and Stevenson make for a good-looking father-son duo, but they desperately need better material. Camille Delamarre (Brick Mansions) directed; he edited Transporter 3, among others, so that's pretty much that. The movie goes in fits and starts, with slices of dramatic scenes inserted to further the plot in between action scenes that are cut so savagely that they repel rather than excite.

Luc Besson contributed to the script and, presumably, as producer and chairman of Europa Corp, exerted the greatest control over the final product, which is but an echo of the earlier films, which, save for the first one, weren't that great to begin with. To put it more simply, The Transporter Refueled is still out of gas.

The film opens wide in theaters across North America on Friday, September 4.

More about The Transporter Refueled