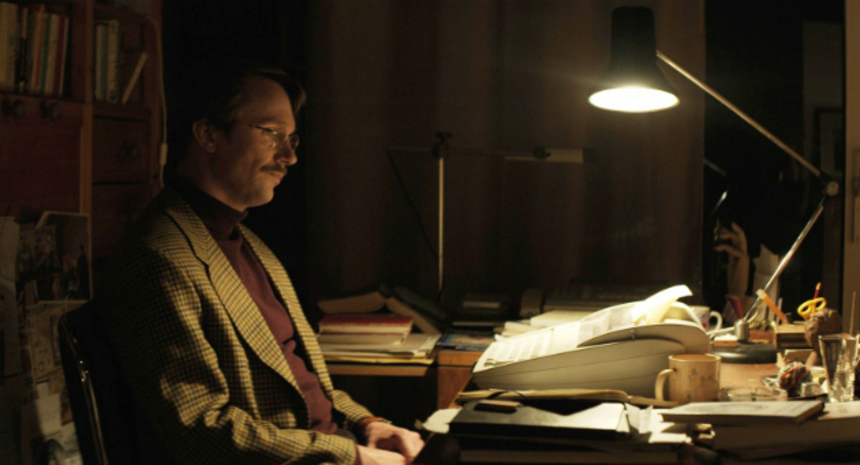 We all know that crime doesn't pay, but who among us would be able to walk away from a big bag of money that's just sitting there, begging for attention?

Sure, that bag of money is surrounded by three dead bodies in The Glorious Works of G.F. Zwaen (original title: De Grote Zwaen), and the man who finds the loot, and the corpses, is by no means a larcenous individual. His name is Gerard Zwaen (Peter van de Witte), an author who has fallen on hard times after a divorce. He peaked early with a successful book, but his latest novella, The Spider, is struggling to sell and is already heading out of "quality" bookstores just a couple of weeks after publication.

As Gerard's publisher reminds him, Gerard is never going to be a bestselling writer; his works are more of the philosophical, ruminative variety that are best appreciated by niche audiences. Gerard, of course, doesn't see it that way -- the "glorious" in the English title appears to be what he thinks of his own writing -- and still dreams of writing a big, big book, "at least 600 pages," that will become his lasting statement.

To achieve those dreams, however, he needs money. His girlfriend, an artist, isn't selling any paintings. What to do? One night he heads home, to a cottage that is his sole possession after the divorce, and visits his next door neighbor, who is also his bookkeeper. That's when he discovers the trio of dead bodies, and a bag with money sticking out of it.

Gerard acts on his instincts, but thinks he has a better plan that simply stealing the bag. Already he's thinking he can outsmart the person or people responsible for those corpses, and already he's demonstrating that he's not as smart as he thinks he is.

The sophomore feature by writer/director Max Porcelijn, Glorious Works shows an even greater command of film language, pacing, and narrative structure than his smart and clever debut, Plan C. Once again, Porcelijn touches on themes of the desperately divorced husband, shady police, and generally disreputable characters. But he takes it in completely different directions, in part because things get serious more quickly in this film and stay that way.

Multiple scenes stand out because they are wrought with tension and suspense, not because we can't figure out what might happen, but because of the manner in which they play out. And it's only conversation! Yet it's the intensity, the hidden meanings that quickly rise and float on the surface of the scenes before they threaten to drown the more hapless of the individuals involved, that makes the movie such a compelling, and perversely enjoyable experience.

The Glorious Works of G.F. Zwaen also features exceptionally good casting, with all the actors giving sterling performances, even if they sometimes look too "ordinary" -- these are not glossy movie stars, but actual actors giving star turns. Two examples: as Leon, whose diabolical role is not initially revealed, Ton Kas is a ruffled-looking fellow, but that disguises his dangerous and experienced criminal mind. As Clyde, Michiel Romeyn looks more like an unhappy blue-collar worker than a monstrous gangster. As Willem, Ruben van der Meer appears more like a pleasant, non-committal office work than a keen-eyed internal affairs police officer.

It all adds up to be something kind of glorious in a low-key, agreeably unsettling criminal drama that pulls no punches.

Do you feel this content is inappropriate or infringes upon your rights? Click here to report it, or see our DMCA policy.
De Grote Zwaenfantastic fest 2015Max PorcelijnNetherlands

More about The Glorious Works OF G.F. Zwaen