Review: EVEREST Tackles Disaster With Diplomacy At The Top Of The World 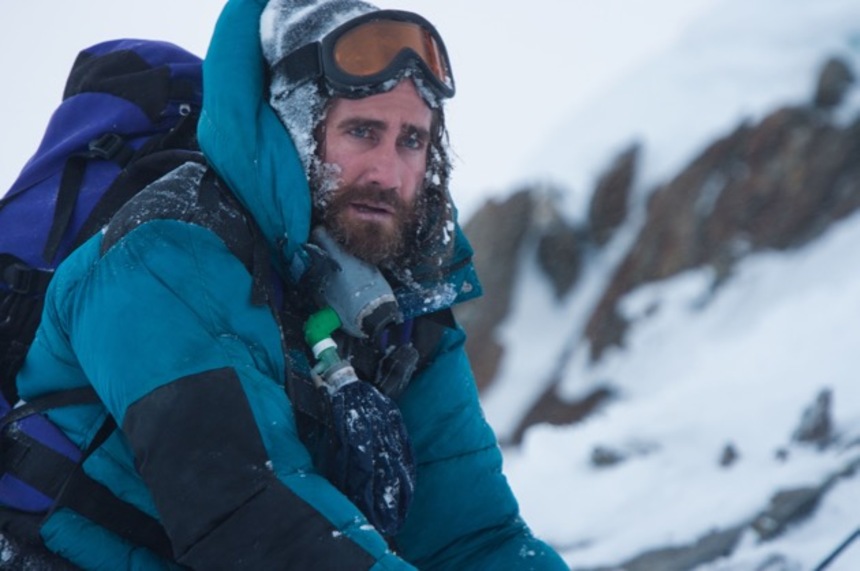 Icelandic filmmaker Baltasar Kormakur tackles his largest Hollywood project to-date, with this epically staged account of the 1996 Mount Everest disaster, in which eight climbers perished on the Himalayan peak in a single day. Featuring a robust ensemble cast and thrilling set pieces, Everest largely avoids the he-said, she-said controversies raised by journalist Jon Krakauer's first-person account, Into Thin Air, instead presenting a diplomatic and stirring tale of Man vs Nature at the top of the world.
In May 1996, Outside Magazine writer and amateur mountaineer Jon Krakauer joined an expedition led by New Zealander Rob Hall and his professional outfit Adventure Consultants to scale Mount Everest, the highest point on the planet. Krakauer's aim was to investigate and report on the ballooning commercialisation of summit attempts in recent years, which raised numerous concerns, from the obvious dangers of unskilled climbers being led up a formidable mountain, to the lasting impact the industry was having on the local community and surrounding environment.
But when Hall's group, together with rival Scott Fischer's Mountain Madness team, were hit by adverse weather conditions, compounding existing concerns over congestion and poorly maintained ropes along the route, the result was one of the most deadly mountaineering disasters of all time. Krakauer subsequently published his best-selling account of his experience, but faced criticism for his depiction of certain individuals and speculation of events that occurred when he was not present. However, with so many strong personalities, existing rivalries and terrible weather present on Everest that day, it is impossible to verify the ultimate truth of exactly what went wrong.
In a diplomatic move, Everest, scripted by Simon Beaufoy (127 Hours, Slumdog Millionaire) and William Nicholson (Unbroken, Gladiator), wisely shies away from any finger-pointing, instead focusing on the driven individuals setting out to conquer Earth's highest peak "because it is there" and the price that must be paid for taking on Mother Nature in her own backyard. Krakauer of course features in the film, played by Michael Kelly, but he is far from its main focus, which instead falls on team leaders Rob Hall (Jason Clarke) and Scott Fischer (Jake Gyllenhaal), prominent clients Beck Weathers (Josh Brolin) and Doug Hansen (John Hawkes), Base Camp manager Helen Wilton (Emily Watson) and Hall's pregnant wife, Jan (Keira Knightley) awaiting her husband's return back home.
Kormakur plied his trade as an actor, producer and director in his native Iceland before transitioning to Hollywood to helm the respectable genre offerings Contraband ( a remake of his own Reykjavik, Rotterdam) and 2 Guns. Somewhat surprisingly, Kormakur seems most comfortable during Everest's perilous set pieces, or simply standing back to let the majestic beauty of Nepal speak for itself. With so many characters in play, the script does have to resort to certain shorthand techniques to ensure each is definable from the other. The ensemble of almost entirely known - or at least recognisable - performers certainly helps audiences keep track of who is who - although this is occasionally tested as characters threaten to become an anonymous train of hooded and goggled victims.
Jason Clarke, in a role originally pegged for Christian Bale, is the perfect everyman hero as Rob Hall, a strong yet diplomatic leader, who always puts the safety of his clients ahead of personal achievement. The film resists the temptation to paint Hall's rival Scott Fischer as a reckless adversary, although the script does take time to highlight the different approaches to their chosen profession. Gyllenhaal's portrayal of Fischer certainly veers on the side of hedonistic thrill-seeker at times, but cultivates a friendly camaraderie between the two rather than anything overtly antagonistic. Ultimately, however, it is Hall's dedication to his customers and Fischer's daredevil bravado that ironically prove their undoing.
Elsewhere, Brits Emily Watson and Keira Knightley appear to be competing to see who can do the best Kiwi accent (Watson, no contest), while Kormakur casts regular collaborator Ingvar Eggert Sigurosson as Russian guide Anatoli Boukreev (a major target of Krakauer's criticism). Brolin's gung-ho Texan and Hawkes' frail veteran, meanwhile, vie for "most likely to die" status, should audiences be unfamiliar with the outcome. And in that regard, Everest does hold a few surprises, so those unfamiliar with how events panned out would be recommended to put off wider reading until after watching the film.
Inevitably, perhaps, the Asian characters are somewhat sidelined. An intriguing rivalry between Hall and Fischer's head sherpas, Ang Dorje and Lopsang, is eluded to before being ignored, while we learn nothing of Japanese climber Yasuko Namba (played by British TV regular Naoko Mori) beyond her being the only woman in Hall's party and having scaled six of the Seven Summits before her Everest attempt.
While the narrative certainly doesn't need a villain, there is a niggling suspicion that the film is going out of its way to avoid conflict between these (mostly) men, despite numerous suggestions many were used to getting their own way and, in some cases, bore personal grudges against one another. Perhaps too many years of Hollywood conditioning has cultivated an expectation to see such characters at each others' throats, yet everyone up and down the slopes of Everest behaves selflessly and gallantly right to the bitter end. While this is certainly a noble manner in which to honour the memories of those left on the mountain, one can't help but suspect more than a little dirt has been left up there with them.
The result is a film that knows its strengths, and firmly embraces them, while leaving its weaknesses exposed to the elements. Presented in 3D on a large IMAX screen (the film even gives a shout out to the IMAX team present on the slopes when the disaster occurred), Everest is as tense and visually impressive as one could hope for, and should go a long way to deterring any casual climbers from venturing out of their comfort zones in the near future.
Sign-In to Vote
Tweet 0 Submit

[[[one can't help but suspect more than a little dirt has been left up there with them.]]]
Correct. The 1996 Everest disaster is even today used as a case illustration for seminars and articles in the science of "Risk Management." You can Google Everest disaster 1996 and "risk management" and come up right off the bat with several. There were uncalled-for risks taken that amounted to gross negligence and reckless disregard, and people paid for that with their lives. Of course, the main parties responsible were the two team leaders, who also both paid with their lives. This is hinted at in the film, but merely hinted.
The two biggest issues were, a) Breach of safety cut-off time. After that time, if you haven't made the summit, you turn around and go back down, period. Mr. Hall and Mr. Fischer breached that, and they breached it in the face of adverse weather forecasts. Then there is b) If you reach the summit, you don't hang around up there longer then ten, fifteen minutes MAX, and you really should just, kiss the Blarney Stone and head immediately back down. Mr. Hall but most particularly Mr. Fischer, stayed longer, and Mr. Fischer stayed for HOURS. And clients who were permitted to keep going to the summit past the safety cut-off, then stayed up there too long, with the result that a bunch of exhausted, oxygen-depleted people were caught in a killer storm.

Yup, both these points are depicted in the movie, which even goes so far as to offer some kind of explanation as to why, but as they're dead it's hard to know for sure. One of the things I actually appreciated in the film was that it steered clear of finger pointing to concentrate on other elements of the drama.

I applaud Working Title for breaking new ground and not sticking to the 'Into Thin Air' version of the 1996 Everest tragedy, which is maybe why this book is not in this film's Credits, something that has not gone unnoticed by some professional reviewers.

Working Title/the Director referred to Jon Krakauer as 'a writer who just happened to be on the mountain at the time'. To learn more about what actually caused this seminal event you will need to read 'A Day to Die For' and 'After the Wind'. Well done Working Title and Baltasar Kormakur for daring to break the mold!

This was a lot, LOT better than I expected beforehand. Pretty riveting stuff, and while I get all the criticisms, EVEREST may have wriggled its way into my top 10 at the end of this year...