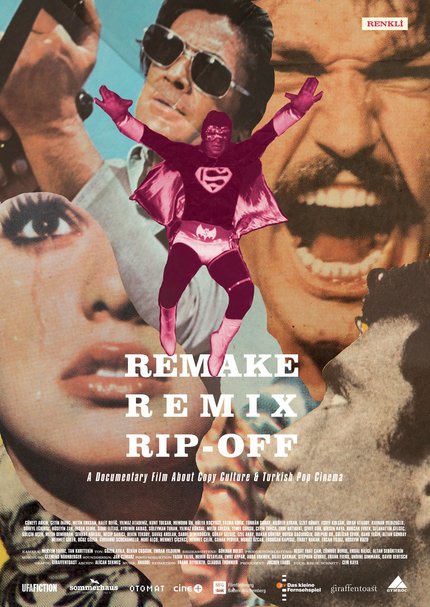 I'm sure that many of us, when we were kids, enjoyed acting out scenes to our favourite movies and TV shows; today, spured on by the internet, fan fiction has taken on new heights of importance (some even arguing that the new slate of Star Wars films are arguably fan fiction). And certainly we are in an era of remakes of such films and shows, to the point of saturation. But I bet no one could imagine the extent to which some have gone in imitating, copying and outright stealing from big American films. A case in point is the Turkish film industry mainly from the 1960s to 1980s. Director Cem Kaya's feature documentary Remake Remix Rip-Off: About Copy Culture and Turkish Pop CInema is a fascinating history of this insane era of Turkish film, where the absence of copyright law and a poverty-created DIY industry accounted for one the strangest outputs in world cinema history.

Yesilçam is a street in Istanbul, and alsothe shorthand name for Turkey's 'Hollywood', as the centre of the country's film industry. Kaya introduces us to this street and those who worked in film - directors, actors and crew - during this strange time. It is through them and their stories that we are introduced to the particular quirks and nuances of the Turkish film industry. With few television in Turkish homes, films were the cornerstone of audiovisual culture, with literally thousands of people attending the cinema every day. This meant an incredible level of production, with more than a hundred film per year, films often made in the space of a week, and with almost no budget. Effects artists worked almost like those in radio, with DIY techniques such as stomping on gravel to reproduce the sound of horses, or sticking soap on table legs to create camera dollies. Honestly, indie filmmakers today can take lessons on how to make magic when necessity is the mother of invention. Not all of these films were masterpieces, of course, but Kaya provides enough clips to show the varying degrees of success

And while this industry produced hundreds of films, one thing that was lacking was variety of screenwriters, and therefore a variety of stories. And this is, where it seems, the remakes and rip-offs came in. Due to the lack of copyright law within Turkey, many filmmakers remade famous and diverse American films such as Some Like it Hot, Superman, A Fistful of Dollars and The Wizard of Oz presumably without permission; these days many decry remakes, but to the Tiurkish audiences of the day, these remakes just added colour, and perhaps gave a unique cultural perspective (the films were never exactly the same). Watching the clips also gives a western audience a different perspective on these 'classics' and how they are perceived from those outside the originating culture.

But the fascinating climax comes about halfway through the film; Kaya introduces the remix/rip-off films, which are brilliant and bonkers. Classic sountracks would be used in Turkish films, with The Godfather theme heard in crime and prison films, Enter the Dragon in action films, The Pink Panther in comedy films, and many more besides, and not used in just one film, but in several over and over. In addition, several filmmakers would take footage from reels of films such as Star Wars and edit the into their own films. The stories were completely different, and this footage was used intermittenly, mainly for special effects that simply could not be created in Turkey, as the technology and equipment did not exist. These films have to be seen to be believed, with spaceships mingling with strange religious rituals and swords. This is a warped kind of fan fiction at its most astonishing and impressive.

Kaya organizes the film as a combination of interviews and footage; this is not uncommon in a documentary, but the sequences are put together in a seemingly effortless manner that is completely engaging. The story itself is interesting enough, but the 'cast of characters' and the interview clips chosen create a warmth and humour that draws and retains the audience's attention throughout. As a history of cinema, well, it's not the kind of cinema, cult or mainstream, that most western audiences are used to, and it's an eye-opener into both the pros and cons of the ingenuity and product that comes when there is little money and little to lose.

Do you feel this content is inappropriate or infringes upon your rights? Click here to report it, or see our DMCA policy.
Cem Kayal'etrangeRemake Remix Rip-Offreview