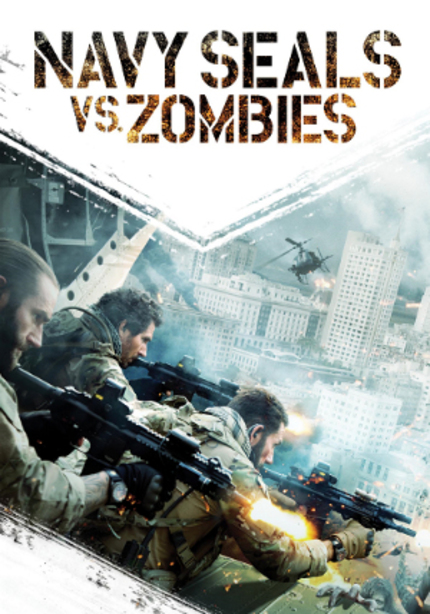 Let's face it: if a movie is titled Navy SEALS Vs. Zombies, that pretty much says it all, doesn't it?

So why, in this exclusive clip, is there any hesitation about highly-trained military men shooting zombies, especially when they start attacking and/or eating innocent civilians? Ah, there's the rub, as the official synopsis explains the plot, if not the particulars of this particular scene:

After losing all contact with the Vice President during a routine campaign stop in Louisiana, the U.S. Government sends in a team of Navy SEALs for the rescue. Dropped into a warzone, the SEALs quickly discover that they aren't dealing with a normal enemy. The city is under siege by hordes of fast moving, flesh eating undead. The infection is spreading and urban warfare has been unleashed. With no cure in sight and time running out, the elite unit has to survive their most horrific mission of all.

Rick Fox stars; he acquitted himself quite well in Dope this year. The great Michael Dudikoff (American Ninja) co-stars, along with one of my favorite screen ladies Molly Hagan (most recently on the pretty good TV show iZombie), plus "Olympian LoLo Jones and real Navy SEALs." Stanton Barrett makes his directorial debut; he's a former NASCAR driver and stunt man.

The clip is available for viewing below. The movie will be available on Blu-ray and DVD on Tuesday, October 6.