Review: THE GLASS MAN, A Frightening Spiral Into A Personal Hell 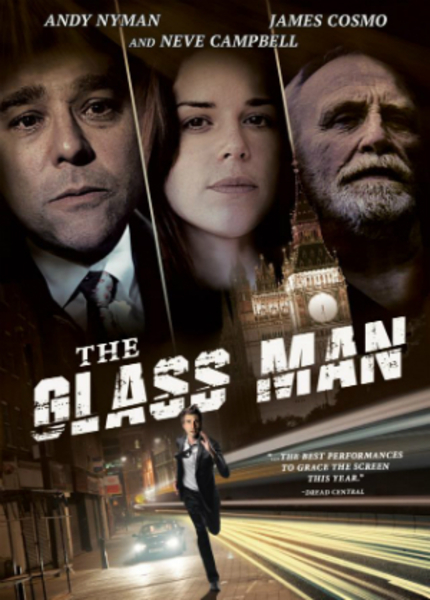 The most uncomfortable subject is not sex; it is money. Not in political discussions, but personal ones. We don't ask people how much money they make; we don't ask them about their personal finances. It is probably safe to assume that as many marriages are damaged by money problems as by affairs. And in today's economic downturn, extreme debt could drive a person to do anything, even criminal acts.
Martin Pyrite (Andy Nyman) is a kind, gentle man, very much in love with his beautiful wife (Neve Campbell). So much in love and so determined to maintain their very comfortable (if not rich) lifestyle, that he lies to her about being fired from his job. He tries to reason with his former boss, he tries to reach out to his former coworkers, but no one will help him. He is tens of thousands of dollars in debt and on the brink of collapse. Then, one night, a rather shady man named Pecco shows up at his door and says he will help Martin, if Martin will help him with a job that is likely highly criminal.
And so begins Martin's frightening spiral to the depths of his own personal hell. The first half of the film focuses on Martin and the world he now inhabits. He is not a violent or harsh man; and so he is perceived as a coward and treated as such by his former boss and even petty thugs. To watch Martin shrivel in front of confrontation is painful; it elicits as much embarrassment as pity from the audience. When his wife mistakes a phone call from a female former colleague as evidence of an affair, Martin still cannot bring himself to tell her the truth. When Pecco forces him to drive to a forest and dig something up, you almost expect poor, beleaugered Martin to drop dead of a heart attack.
This is Crisitan Solimeno's feature-length film debut, and it is an incredible achievement. When Martin confronts his former boss, the camera shows the distance between them in reflection of how far Martin has fallen. And it closes in on Martin frequently, confronting him as those who are threatening him in his desperate state. The screenplay (by Solimeno as well) is like a noose, pulling tighter and tighter around Martin, and he helps it along. And it is a funny as it is horrifying; the humour is necessary to cut the tension, and and is inevitable in such a ridiculous situation.
The tension begins in the first ten minutes, with a conversation between husband and wife about an item of clothing; seemingly innocent, but the dialogue is contrasted by the distance between them, filming one on the ground floor and the other three flights up, from the opposite's perspective. As Martin goes through the normal routine of the working day, we know something is not quite right. Everything is too perfect, and Martin does not fit in. Without a job, on the brink of losing his home and his wife, everything he has worked for and loved, there is no place left for him in perfection.
The strength of the script is matched with every beat by what is likely Nyman's best performance to date. Comedians generally excel at dramatic roles, and Nyman is no exception. He treats Martin with respect, but does not shy away from pulling back layers of control, and with every flick of his eye and movement of his body, showing a man who, as in the title, is showing the cracks spreading fast and furious through his psyche. His dire circumstances are such that the last four pounds in his pocket are spent joyfully and gratefully on ice cream; this little things are all he has left.
Nyman shows Martin as a devoted and quietly passionate husband and friend, never wanting to hurt anyone and yet unable to stop his rapid downfall. Nyman is matched in performance by James Cosmo as Pecco. Where Martin is glass, Pecco is the hardest cement, scarred but impossible to break, and his threats are so frightening that laughter seems the only logical reaction.
A surprisingly funny and brilliantly tight psychological thriller, The Glass Man is easily one of the best films at [FrightFest] this year, and one of the best of the year from the UK. Certainly topical in its examination of financial woes, it widens to a larger inquiry into how far an individual will go to save his own existence and those who he loves, and the danger of extreme collapse on the human mind.

Review originally published during FrightFest in August 2011. The film will open in select U.S. theaters on Friday, August 14 and will also be available to watch via various Video On Demand platforms.

The Glass Man - Official Trailer from Indican Pictures on Vimeo.

Do you feel this content is inappropriate or infringes upon your rights? Click here to report it, or see our DMCA policy.
Andy NymanCristian SolimenoJames CosmoNeve Campbell

More about The Glass Man

Wait is last name is Pyrite, as in fools gold? Isn't that a bit on the nose?