Review: RICKI AND THE FLASH, Even Meryl Streep Can't Do Everything 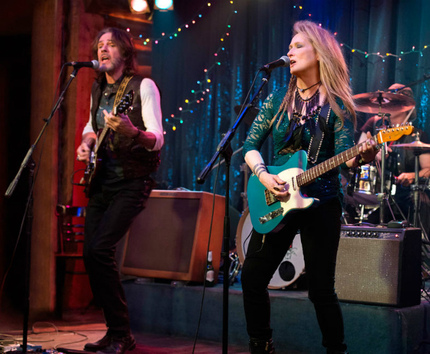 As an actress, Meryl Streep can do just about anything. Too bad she can't rescue a movie that doesn't know whether it's a routine dysfunctional family comedy-drama or a portrait of a musician coming to terms with the failure of her career.

Streep first popped in a small role in 1977's Julia before grabbing the attention of critics and fellow actors the following year in Michael Cimino's The Deer Hunter, earning her first Academy Award nomination. A staggering 18 nominations have followed, and she's won three Oscars in total.

Having built a sterling reputation as a dramatic performer, she began mixing comic roles into her repertory starting in 1989 with the sour She Devil before scoring with the absolutely delightful Defending Your Life (1991). Meanwhile, she had been displaying her fine musical abilities as a singer on soundtracks as far back as 1983's Silkwood

Ricki and The Flash would seem to be an ideal showcase, then, for Streep's impressive variety of talents. Written by Diablo Cody (Juno, Jennifer's Body) and directed by Jonathan Demme (reteaming with Streep, with whom he made The Manchurian Candidate in 2004), the cast includes a juicy role for Mamie Gummer, Streep's real-life daughter, who gets to play the disgruntled, estranged daughter of Streep's character. And the movie features several extended sequences that allow Streep to sing and lead her band, The Flash.

So why doesn't the movie ever catch fire and burn with authenticity? The opening scene provides a clue: Ricki and The Flash are beginning a set in front of a small crowd of loyal followers at a bar in the San Fernando Valley (just north of Los Angeles), where they have a regular gig. The band includes ace real-life musicians, and Ricki's "man friend" Greg (Rick Springfield) also sings. They kick off with a version of Tom Petty's "American Girl," and it sounds ... fine, for a cover band made up of aging musicians. But it doesn't sound like a strikingly original take on the song, which, again, drops a strong hint about the very familiar movie to follow. Now, the premise of the film is that Ricki abandoned her family -- husband (Kevin Kline) and three young children -- in Ohio to pursue rock stardom, a dream that died after her first and only album bombed upon release. What happened after that? It's left off-screen. What, exactly, were her dreams and ambitions, beyond becoming a "star"? It's left off-screen. Why didn't she return and try to reconcile with her family? Eh, it's hard to say.

For all that Ricki's family feels estranged from her, it's exceedingly difficult to penetrate the mystery of why Ricki never returned home. The film gives no evidence that she became addicted to drugs, alcohol, or wanton sexual conduct. What was it that prompted this otherwise kind and loving woman to abandon her children?

Her musical "career" requires that she work a day job as a grocery store cashier in order to make very modest ends meet, yet she also abandoned the idea of writing original songs or otherwise doing much more than playing other people's music, so whatever burning ambition she may have once had has long since been dampened.

It's a mystery that might have been answered in the movie, which favors instead the kind of confrontations -- and easy solutions to long-standing differences -- that litter the broadcast sitcom world. Cody's dialogue substitutes an exchange of speeches for actual conversational interchanges, which helps muffle any potential drama from arising. The performers act as though things get heated and that tired jokes are still funny, which helps make the time pass without too much pain.

What saves the movie are the musical sequences, which are far more extended than might be expected from a family drama. The music itself is not terribly inspired, but Jonathan Demme obviously has a great knowledge about how to stage and shoot musical numbers, which makes those scenes utterly entrancing, even if they leave one wishing that the entire movie took place in the bar where Ricki and The Flash first play.

The film opens wide in theaters throughout Canada and the U.S. on Friday, August 7.

Ricki and the Flash